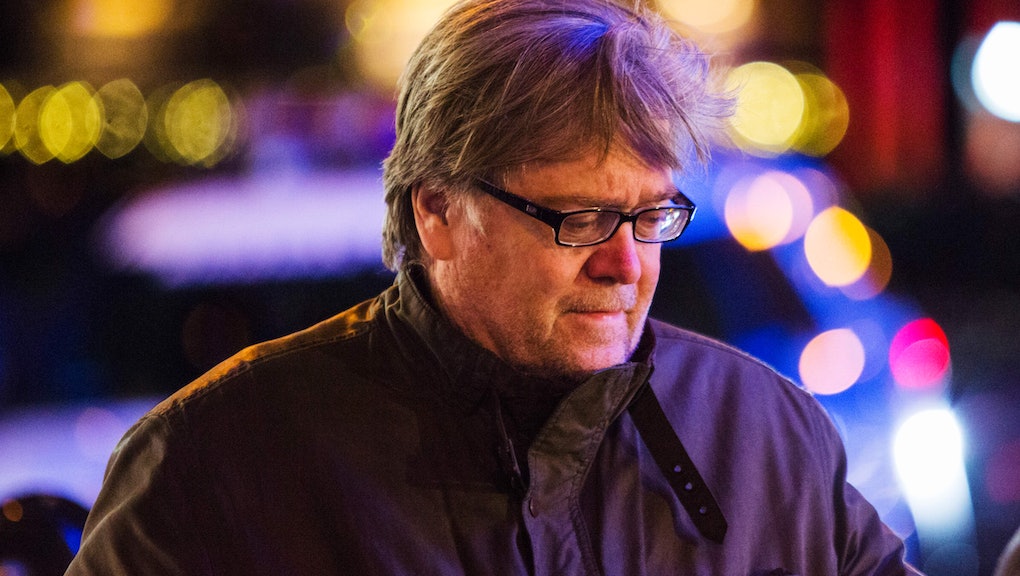 "He’s got a tremendous understanding of the world and the geopolitical landscape that we have now," Spicer said on ABC's This Week. "Having the chief strategist for the president in those meetings, who has a significant military background, to help make, guide what the president’s final analysis is going to be, is crucial.”

What we know about Bannon's naval career

Bannon, whose Breitbart News acts as the mouthpiece of the white nationalist alt-right, served for seven years in the Navy in the late 1970s and early 1980s, according to Military Times.

The conservative media mogul joined the Navy after graduating from Virginia Tech, where he had been president of the Student Government Association, the New York Times reported. A fellow officer told the Times that Bannon had said he enlisted in the military "so it would look good on his résumé because he wanted to go into politics someday."

He served as a surface warfare officer and a special assistant to the Navy's top admiral at the Pentagon. He served on the Paul F. Foster, a guided-missile destroyer, and was twice deployed; he was present for the aborted Desert One mission to rescue American hostages in Iran, according to Military Times. A Navy officer who served with Bannon described him as "absolutely a good sailor and naval officer.” The Times reported that Bannon was popular among the diverse engineering department he led.

Bannon disapproved of President Jimmy Carter and is said to have finagled tickets to Ronald Reagan's election night party in 1980 for himself and a group of other sailors.

He earned his master's in national security studies at Georgetown University while in the Navy, and left the service in 1983 to attend Harvard Business School. He went on to a career in investment banking and conservative media.

The announcement that Bannon would be elevated to the new role on the security council was met with criticism.

Former acting CIA chief Michael Morell said Monday that the shuffle was "unprecedented" and that Bannon will bring "politics into a room where there should be no politics.”

Republican Sen. John McCain, while praising Trump's security team, said Sunday that he had "concern" about Bannon's appointment, which he described as a "radical departure from any National Security Council in history."