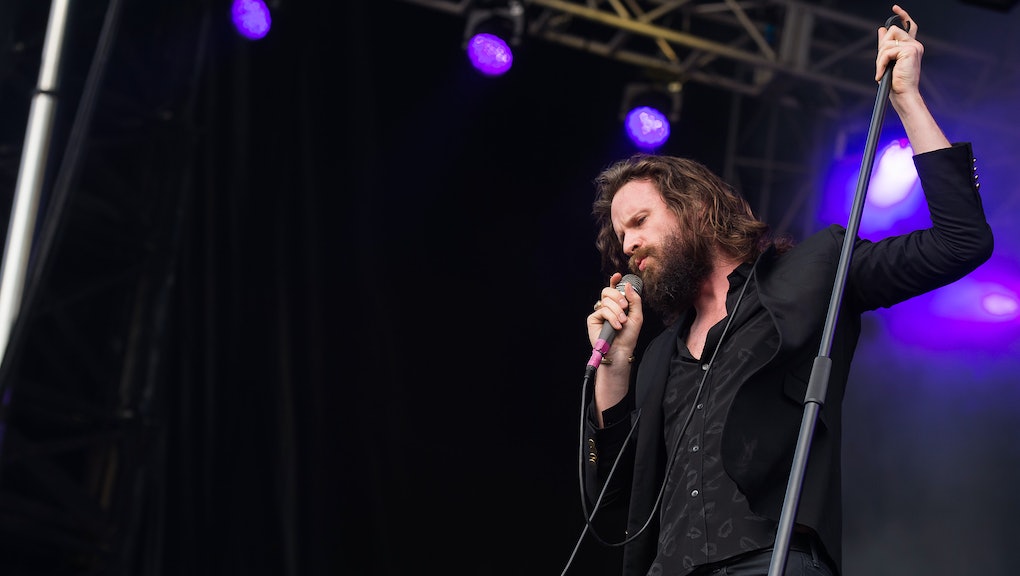 Satire has long been Father John Misty's go-to weapon in his campaign to deride and dismantle all things inane and unjust in our culture. However, it seems certain conflicts in 2017 are too loud and too contentious for that method to be effective.

"More kids are going to die now thanks to the unbelievably selfish immigration policy of places like Saudi Arabia and the USA," Father John Misty writes plainly introducing the song on YouTube. The video seems to establish a loose narrative of a group young American soldiers stalking a target in an open field. An innocent child plays with a flashy toy gun, aiming it his own face carelessly in one moment. A sensationalist news report warns people to "flee for your life and take your fridge." All the actors are toddlers and prepubescent children.

The imagery seems to send a clear message: When it comes to vital topics such as gun violence, immigration policy and media transparency, our culture is currently debating them on a kindergarten level.

Notably, the lyrics don't pass blame on any one concerned party for the lack of depth in these debates. In the song's first verse, Father John Misty sings:

"One side says'Y'all go to hell,'The other says'If I believed in God, I’d send you there.'But either way we make some spaceIn the hell that we createOn both sides."

It's a more specific version of the conclusion he draws at the end of "Pure Comedy" — "I hate to say it, but each other's all we got."

The track is a break from so much of the political music circulating today. "Shouty" is perhaps the easiest characterization, in contrast to Father John Misty's reserved and patient consideration of this conflict.

You can see it from the titles on down to the lyrics in songs like "FDT (Fuck Donald Trump)" by YG, "Demagogue" by Franz Ferdinand and "Locker Room Talk" by Cold War Kids — songs that take shots at Trump. They're hooks that can be shouted with great feeling at a protest, but they don't offer too much food for thought as to how things got this way.

On the other hand, much of Father John Misty's recent music lives there, unpacking that issue. His "Pure Comedy" video traces the rise of Trump all the way back to the basics of human biology and religious thought.

Father John Misty's recent work seems to suggest that until we learn to talk to each other and decent humans and consider the twists and turns of history that have brought us to this point, we'll continue to every issue in black and white absolutes, like children with big agendas and big guns to carry them out with.