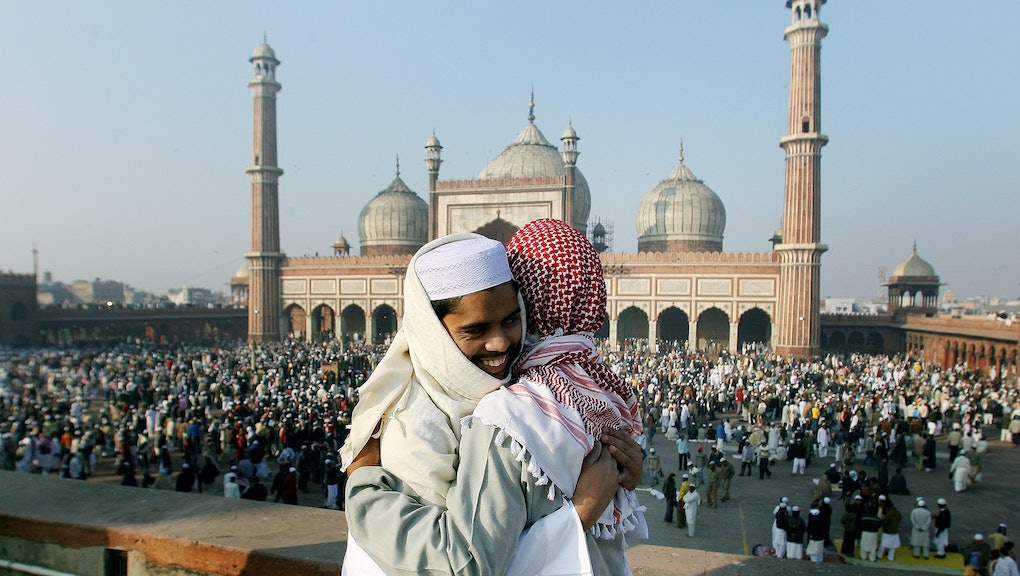 7 things you should know about Islam around the world

Despite Islam being one of the world’s largest religions, most Americans say they know little to nothing about it, and 43 percent of Americans have self-reported prejudice against Muslims. Hate crimes against American Muslims have reached their highest level since 9/11, and were up 67 percent over the course of 2015. And now President Donald Trump has banned immigration from seven predominantly Muslim countries.

1. Islam is the world’s second-largest religion, after Christianity. There are 1.6 billion Muslims in the world — that's 23% of the global population.

Not all Arabs are Muslim and not all Muslims are Arab — Muslims live all over the world.

4. Muslims around the world are incredibly diverse. How they dress, what they look like, what languages they speak, and what they believe varies person-to-person, like with any religion. Sunni and Shia are two subgroups of Islam — the split goes back to the death of the Prophet Muhammad in 632 and a disagreement over who should succeed him as a leader in the Muslim community.

However, there are many types of Islam around the world, from people who practice mystical Sufism to Salafists who believe that the purest form of Islam is to live as the earliest Muslims did.

While Muslims each have their own interpretation of Islam and unique relationship with God, there are five pillars of Islam central to the Muslim faith. They are Shahadah, or reciting the profession of faith; Salat, praying every day; Zakat, charity and helping the needy; Sawm, fasting during Ramadan and Hajj, the pilgrimage to the holy site of Mecca.

Allah is simply the Arabic word for God. Arabic-speaking Muslims, Christians, and Jews all use the word Allah for God.

The Quran is the holy book of Islam — and it references many of the same people and stories that are found in the Christian bible. The Quran also preaches respect for Christians and Jewish people, other “people of the book,” who worship the same God.

A mosque is a place of worship for Muslims, like a church for Christians or a synagogue for Jews.

Sharia law is, despite the xenophobic fear surrounding it, simply law based on Islamic principles from the Quran. According to the Southern Poverty Law Center, "Sharia represents how practicing Muslims can best lead their daily lives in accordance with God’s divine guidance." For most American Muslims, according to the SPLC, Sharia is a personal set of faith guidelines.

6. Islam is not a “religion of violence.” Neither Islam, nor any other religion used by extremists to justify terrorism, is itself inherently violent. The vast majority of Muslims in America and around the world believe terrorism in the name of Islam to be a perversion of the religion and have frequently and stridently condemned terrorist acts.

The United Arab Emirates recently established a National Tolerance Program to promote peaceful coexistence and cultural diversity and quash violence and extremism. According scholars of Islam, in the Quran, the only kind of war that's permissible is one fought in self-defense. In 2014, more than 120 of the world’s top Muslim leaders wrote an open letter to the leader of ISIS, using religious texts to illustrate why ISIS’s actions are unholy in Islam.

Americans are more likely to be murdered for being Muslim than to be killed by a Muslim. An FBI study of acts of terrorism perpetrated on U.S. soil between 1980 and 2005 found that 94% of the acts of terror were committed by non-Muslims.

In fact, most law enforcement agencies are more concerned about violence by anti-government extremists than by radical Islamic terrorists. Yet Americans have fixated on the idea that Muslims are perpetrators of terrorism and violence, in a way that they have not for radical Christian identity groups committing acts of terror, such as the Aryan Nation and the Ku Klux Klan.

Many Muslims agree that the Prophet Muhammad dramatically advanced the status of women in 7th century Arabia. Islam teaches that women have the right choose to their own husbands, that both men and women have an obligation to learn and become educated and that women have the right to own and inherit property; there are even stories about the Prophet Muhammad encouraging married couples to focus on sexual satisfaction for both partners.

Of course, as is true for the Christian bible, the Quran contains passages that encourage submission from wives and other lines the reflect the time in which it was written. And, as with the Christian bible, many of today's Muslims do not take all the teachings of their holy book literally.

A Gallup poll among Arab men and women in Egypt, Libya, Syria, Tunisia and Yemen, countries that have vastly majority-Muslim populations, found that those who considered religion important were far more likely to believe women should have the right to initiate a divorce. And a majority of Muslim women in the countries surveyed believed women should decide for themselves how they dress.

Associating the entire religion of Islam with terrorism or oppression is narrow-minded and wrong. For centuries, Muslims around the world have been responsible for scientific discoveries, works of art, and major technological advancements. There is a great deal of diversity in the way Islam is practiced by the 1.6 billion Muslims around the world, it is a vastly complex and diverse religion. And if you don’t personally know anyone who is Muslim or know much about Islam, learn more—keep reading, and start traveling.

About the Author: Tasha Prados is a returned Peace Corps Volunteer (who served in Peru), a traveler and a writer. She has lived, worked or volunteered in six countries, and been to over 20 on every continent except Antarctica. She is a contributor to Mic and to Keteka.