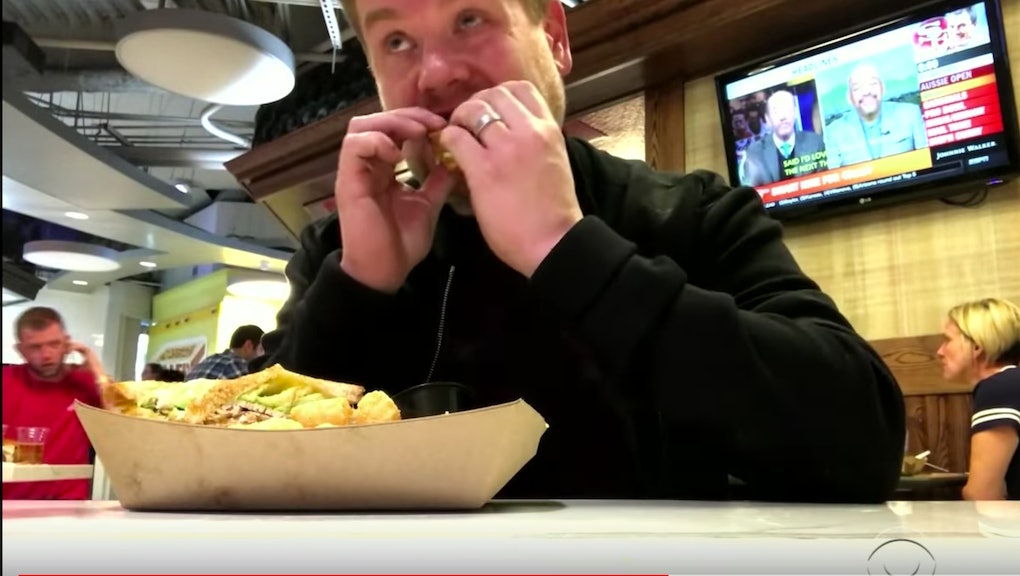 As is becoming customary in the early days of Donald Trump's presidency, as it was during his campaign, late night television has shifted toward tackling some of Trump's most controversial policies, particularly the hosts who have spent the better part of the year taking him down. Think Samantha Bee, John Oliver, Seth Meyers, Trevor Noah and Stephen Colbert.

But one host, more associated with viral videos of celebrities singing in cars than politics, might have had the best response to Trump's immigration ban. James Corden taped all of this week's episodes of The Late Late Show ahead of time, but he took a moment to respond to the ban by recording his trip to Los Angeles International Airport to board a flight.

Corden makes his way to the airport — where he briefly shows a group of protesters outside the entrance — before he goes through the usual rounds of airport security. It's all rather mundane; he eats a grilled cheese sandwich ahead of the trip and eventually boards his flight after exchanging pleasantries with the employee checking his ticket. But as Corden walks toward his plane, the screen goes black and a message is relayed:

"Freedom of movement should be this easy for all legal immigrants," the message reads. "Not just the white and Christian ones."

Corden's show is rarely political, so the host's message of unity is particularly resonant, even in its simplicity. But Corden, who is a British national, has expressed his support on Twitter for those protesting the immigration ban.

While not every late night host should be inclined to deliver seething Trump takedowns like Bee or Colbert, there's clearly room for the least political hosts to express their support as well (except maybe Jimmy Fallon).