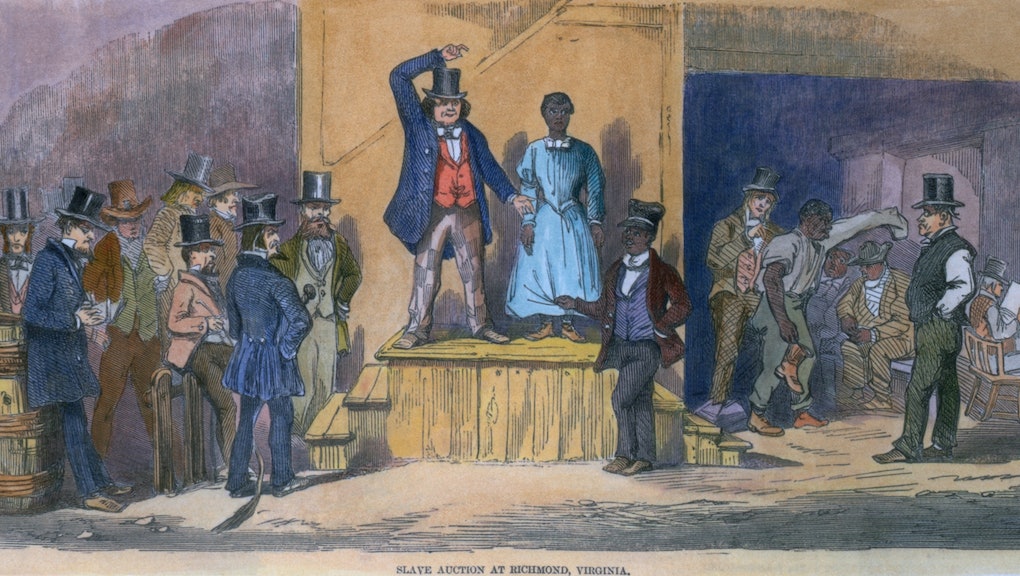 In honor of Black History Month, here is how not to teach children about slavery

It's impossible to discuss American history without touching on one the darkest, longest chapters of our nation's past — slavery. So why can't we stop glossing over what may be both the most horrific and historically significant element of our country's relatively short history?

In 1860, one year before the Civil War began, the population of enslaved people in the U.S. was nearly 4 million, making the ratio of free people to enslaved people 7-to-1. And, while chattel slavery may have ended with President Abraham Lincoln's 1863 Emancipation Proclamation, Douglas A. Blackmon argued in his Pulitzer Prize-winning book, Slavery by Another Name: The Re-Enslavement of Black Americans from the Civil War to World War II, that forced labor for black Americans continued on into the 20th century.

You'd think that, considering both the heinous nature of slavery in the U.S. and its long-lasting repercussions, educators tasked with teaching the next generation about the millions of people who lived and died as slaves in the U.S. would approach it with the gravity it deserves.

But year after year, stories surface of textbooks and lessons about slavery that aren't just insufficient, they're flat out wrong and offensive. Here's exactly how not to teach kids about slavery.

Back in October 2015, the New York Times reported the story of 15-year-old Coby Burren, then a sophomore at Pearland High School in Pearland, Texas, who opened his geography book and found a map of the U.S. titled "Patterns of Immigration." In the map, the people who were captured, enslaved and transported against their will through the slave trade were referred to as "workers."

The caption read "The Atlantic Slave Trade between the 1500s and 1800s brought millions of workers from Africa to the southern United States to work on agricultural plantations." And on the next page, authors mentioned that many European immigrants came to the U.S. as "indentured servants" without acknowledging the Africans who were brought to the Americas captive and enslaved.

Burren took a screenshot of the page in his textbook and sent it to his mother, Roni Dean-Burren, with the message, "We was real hard workers, wasn't we." Dean-Burren was shocked too, and she shared the pages in posts on social media.

"It talked about the USA being a country of immigration, but mentioning the slave trade in terms of immigration was just off," Dean-Burren told the Times. "It's that nuance of language. This is what erasure looks like."

And because Burren and his mother spoke out against the textbook's misleading and offensive wording, the book's publisher, McGraw-Hill Education, issued an apology on Facebook and promised to "update this caption to describe the arrival of African slaves in the U.S. as a forced migration and emphasize that their work was done as slave labor."

Don't say slaves were treated like "members of the family."

A Connecticut textbook was used for years before it was pulled from classrooms in the state in January after a parent brought up "concerns" about a passage that made slavery sound downright pleasant.

The offending passage in "The Connecticut Adventure," a social studies textbook used by fourth-graders in Norwalk, Connecticut, both dismissed and erased the brutality and the inherent moral injustice of slavery, reading "Compared to other colonies, Connecticut did not have many slaves. Some people owned one or two slaves. They often cared for and protected them like members of the family. They taught them to be Christian, and sometimes to read and write," reported the Associated Press.

Speaking about the textbook, Michelle Zacks, associate director at Yale University's Gilder Lehrman Center for the Study of Slavery, Resistance, and Abolition, told the Hour that, while the "degree of brutality connected with slavery" varied around the state and around the nation, "the basic fact that enslaved people in this state were bought and sold as though they were livestock or inanimate objects was profoundly dehumanizing and placed them in a much different social status than 'family.'"

A week after the passage was brought to the attention of school officials, the school district announced that it would be removed from classrooms. "When it was brought to our attention it was pretty clear it wasn't consistent with our core beliefs and values," district spokesperson Brenda Wilcox Williams said in a statement, according to the AP. "We felt it was important to respond quickly as a result of that."

Don't say that plantation owners were "fair and kind" to enslaved people.

In 2014, Brookline, Massachusetts, resident Brooks Ames was shocked when his daughter brought home a textbook used in her fifth grade class that said, of U.S. slavery, "Slaves were treated well or cruelly, depending on their owners. Some planters took pride in being fair and kind to their slaves."

The passage was in the 2003 edition of "Harcourt Horizons: United States History," reported the Boston Globe at the time, meaning it had been in use for more than a decade without anyone pointing out the issues in its description of slavery.

"Slavery was a racist system," Ames said at a school committee meeting in November of that year. "It was a cruel system. It was an evil system. And when you start talking about good slave owners and bad slave owners and happy slaves and slaves that weren't so happy you're completely missing the point. And the fact that this textbook was in our schools for 10 years is a system failure."

According to the Globe, after first hearing complaints, town Superintendent Bill Lupini had originally directed schools not to use the passages that had inspired Ames' concerns, but to keep the textbooks. But after more complaints, the district officials decided to pull them out of classrooms altogether. A spokesperson for Houghton Mifflin, the textbook's publisher, said that newer editions don't include those passages.

Students have been studying slavery in the U.S. for decades, so how do we keep getting it so horribly wrong?

Grappling with massive, institutionalized cruelty is no easy task, especially for kids, but we owe it to American students to tell them the truth. We'll never be able to reckon with our shared national history if we insist on sugarcoating it.