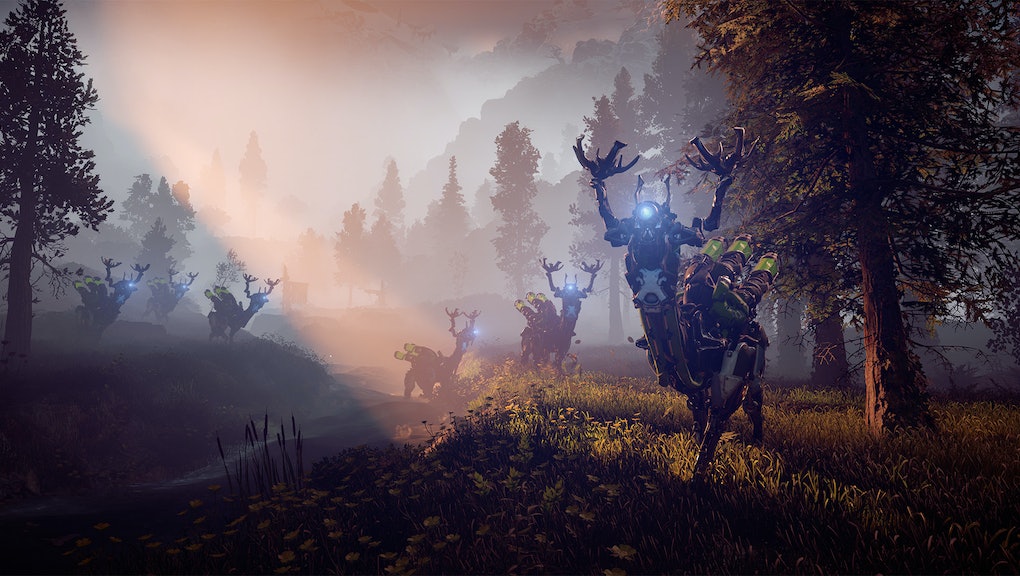 Horizon Zero Dawn has been one of the most immediately captivating games of 2017 and it's finally almost here. The new game launches on Feb. 28, just a few days before The Legend of Zelda: Breath of the Wild. It's a good year for system-selling games set in lush, vibrant open worlds.

Unless you own an Xbox One, that is — RIP Scalebound.

Anyway, several publications have recently gotten extended hands-on sessions with Horizon Zero Dawn. Keep reading to find out what they think of the post-post-apocalypse and its robot dinosaur action.

Developer Guerrilla Games is best known for linear shooters like Killzone, but Horizon is a bold departure for the company. You play as Aloy, a woman from a primitive tribe of humans in a world so far past the robot apocalypse that people have looped back around to nomadic hunter-gatherers. Cities are now no more than literal concrete jungles, but instead of wildlife, mysterious mechanical beasts roam the land.

Since humans are now at the bottom of the food chain, using every advantage you can get to hunt robots and forage for supplies is a must. According to Polygon, you can use a variety of tools to shock, stun and overcome in "intense" combat. Polygon compares it to Far Cry, which seems apt given you will need to gather supplies and upgrade Aloy's gear throughout the game.

If that sounds like a bit much, Game Informer reported the game's controls are easy to learn and feel great. Its takeaway was that players have a remarkable amount of choice in how to deal with the game's different species of robot dinos, so tactical play is a requirement. The game also has Assassin's Creed-esque stealth mechanics, which Game Informer praised.

There's no denying that mainstream video games have a problem with gender, but the Guardian praised Horizon for its female protagonist as well as its handling of modern social issues in its futuristic setting.

Lara Croft emerged as a highly sexualized entity into the era of lads' mags and Page Three pin-ups, her feminism buried beneath swathes of marketing focused on her other assets. Aloy arrives into a culture where everyday sexism and online bigotry are being called out and tackled, where gender and mental health issues are being framed and discussed.

That's not entirely foreign to Guerrilla Games' repertoire; Killzone: Shadow Fall was an extended Cold War metaphor. Still, it's refreshing to hear that Horizon Zero Dawn is a little more than just a fun, robo-slaying romp through the future wilderness.

After all, a world destroyed by autonomous robot creatures is perfect for pontification on drone warfare, which the Guardian reported is indeed in the game. They also talked about the game's use of player choice at key moments:

The complexities of our heroine and her narrative are signaled early on in the game with dialogue options and flashpoint decisions. It's up to you how Aloy reacts in certain situations, with these decisions rippling out to events later in the game. Should you check up on Rost's well-being before the Proving? When Aloy is a child, should she throw a rock back at a young Nora boy? It's not quite the level of cause and effect you'd see in Mass Effect or a Telltale adventure, but Guerrilla assures us that these moments will have consequences to the point that characters live or die by your choices — and we're certainly given the impression that we have some control over the kind of heroine Aloy becomes.

Again, it's heartening to hear that Horizon Zero Dawn has this level of storytelling underneath its incredible looking open world action. If you own a PS4, you can dig deep into that for yourself when the game launches at the end of February.

Check out Mic for more news from the world of gaming, including an incredible Overwatch fan zine, the possibility of Skate 4, RBI Baseball's newest cover athlete and how to dominate Dota 2's newest event.