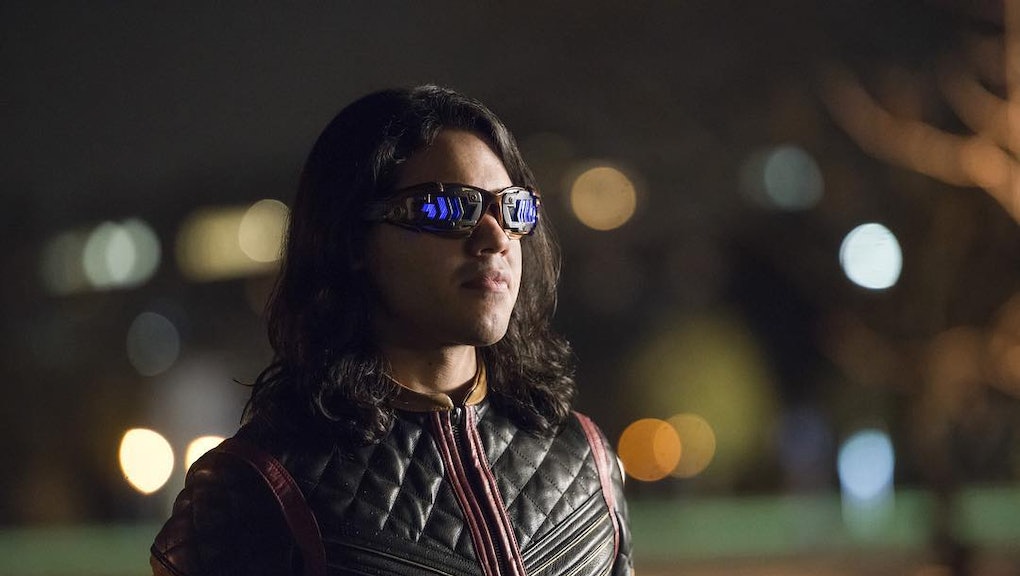 'The Flash' season 3, episode 11 teases how Barry could save Iris

After a big midseason premiere, The Flash returns to the CW with a quieter episode mainly focused on HR and Cisco. In episode 11 of season three, “Dead or Alive,” Cisco steps up to fight Earth-19 bounty hunter and fellow viber Gypsy. It’s the biggest challenge he’s faced yet. Losing to her could mean death for both Cisco and HR.

The Flash has taken its time doling out information about HR. We know he’s a conman who lied about his intelligence to come to Earth-1, and we know he’s a writer and celebrity back on Earth-19. But his exact motivation for being has been a mystery, until now.

HR has been sending Earth-19 a fictionalized novel about his adventures on Earth-1. He tells Cisco that he did it to prove to himself and Earth-19 that he’s not a fraud. The only issue? Due to an inter-dimensional war, traveling between universes has been banned on Earth-1. To do so is punishable by death.

Enter Gypsy. Jessica Camacho plays the lawful bounty hunter from Earth-19. She’s been sent to Earth-1 to find HR and bring him back to be killed. Her powers to vibe and shoot energy are almost identical to Cisco’s — and therefore he immediately falls in love with her. After showing up at STAR Labs unannounced and quickly disabling Wally and Cisco, she tells HR he has an hour to get his affairs in order and be escorted back to Earth-19.

HR tells Barry and Cisco that the only way to stop his execution is to challenge Gypsy to trial by combat. Cisco steps up with little hesitation, but he should have thought twice. Trial by combat is to the death and Gypsy’s powers far outrank Cisco’s. They’ll battle in 24 hours time.

The rest of the conflict plays out pretty simply. HR and Barry try to stop Gypsy themselves, but it doesn’t work. Cisco trains to improve his powers but it’s not going well. Julian, of all people, discover’s Gypsy’s weakness — she steps off the ground when vibing. Cisco and Gypsy travel to a few different Earths during the battle, including Supergirl's, before Cisco exploit’s her weakness. Always the good guy, Cisco spares her life and they strike a deal. HR can stay on Earth-1 if Gypsy can go back to Earth-19 and tell the authorities HR is dead.

“Dead or Alive” dives into HR and Cisco’s relationship in a newly meaningful way. Cisco tells HR he stepped in to save him “to balance the scales.” After all the help and advice Cisco received from the previous Harrison Wells, he wanted to make it up to him. Cisco explains the great thing about the team is they’re “all making investments in each other.” Cisco foreshadows that one day HR will have to step up and save him.

Elsewhere in the episode Iris struggles with knowing she could die in four months. Iris is afraid she won’t make her mark on the world professionally. Her reaction is to go after a big story about an arms dealer and enlist Wally’s help. In the process, she almost gets herself killed, but ends up getting the scoop.

Wally is getting faster and faster, which leads Barry to realize that Kid Flash could be the one to stop Savitar from killing Iris. As the preview for next week shows, it’s time to train Kid Flash for his biggest fight yet.