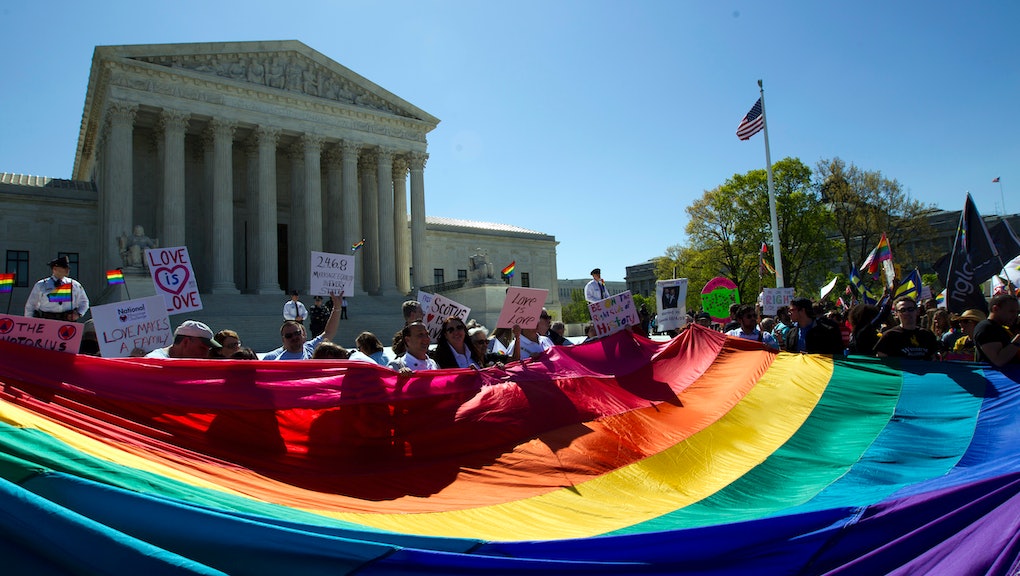 Despite Trump's assurances, LGBTQ rights are hardly 'settled' in court

The day the Supreme Court handed down its decision in Obergefell v. Hodges, which declared that same-sex couples nationwide had a constitutional right to marry, was a joyous one for wives Leigh and Jana Jacobs. On top of the landmark court decision, June 26, 2015 also marked the birth of the Little Rock, Arkansas, couple’s second son, Finch.

But that joy soon turned to frustration. Because Jana is not biologically related to Finch — Leigh is his birth mother, and he was conceived through artificial insemination using an anonymous donor — the Arkansas Department of Health refused to name Jana on Finch’s birth certificate without a court order. If Jana couldn’t claim Finch as her son, she couldn’t enroll him in her health insurance — and that was hardly her biggest concern.

“Death, divorce — [anything] could occur, and then I would have no legal claim to either of my kids,” Jana said. “We’re just a family like any other. We just want to be recognized that way and not be made to feel like we’ve done something wrong when we go to get a birth certificate.”

The Jacobses, along with two other gay couples in the state who faced the same bureaucratic obstacles after conceiving children via artificial insemination, sued the Arkansas Department of Health in July 2015, alleging a violation of their constitutional rights as enumerated by Obergefell. A circuit court judge in Pulaski County sided with the couples, but the Arkansas Supreme Court reversed and dismissed that decision in December.

“It does not violate equal protection to acknowledge basic biological truths,” Associate Justice Josephine Linker Hart wrote in the decision. Children do not have two parents, she argued. They have a mother and father. “The difference between men and women in relation to the birth process is a real one,” she continued, and those genetic ties must recognized and prioritized, no matter who is raising the child.

It has been nearly two years since the Supreme Court handed down the Obergefell ruling, making marriage equality the law of the land in all 50 states. Yet, as the Arkansas case demonstrates, the extent of that equality remains vulnerable to interpretation in lower courts — and it won’t just stop with Arkansas.

President Donald Trump has said that he considers same-sex marriage to be “settled.” Yet he also said that he would “strongly consider” appointing a Supreme Court justice who would overturn the Obergefell ruling. It seems like even the most “settled” of civil rights issues could enter the courtroom once more.

Many legal experts disagree with the Arkansas Supreme Court’s decision. Lambda Legal Senior Counsel Camilla Taylor said that the Arkansas ruling is clear violation of the Supreme Court’s decision on marital benefits, like birth certificates, and that it leaves many within Arkansas’ LGBTQ community “targeted for discrimination.” Human Rights Campaign Senior Legislative Counsel Cathryn Oakley agreed that the Arkansas ruling is “contrary to Obergefell,” adding that it places undue burden on married same-sex couples trying to start families via artificial insemination.

Much of that burden lies in forcing the non-biological parent in these couples to file for stepparent adoption in order to secure a legal claim to their child. For one, filing for adoption is costly. Courtney Kassel, one of the six plaintiffs in the Arkansas ruling, said that some lawyers were charging her as much as $5,000 to complete the process.

“For two whole months, I had to make sure I didn’t die.”

Filing for adoption also takes time. Kassel, who is the birth mother of two children with her wife, Kelly Scott, said that it took two months for Scott’s name to be added to her daughter’s birth certificate. Had something happened to Kassel in that time period, Scott’s relationship with 5-month-old Lux could have been jeopardized as she lacked legal documents proving her parentage.

“For two whole months, I had to make sure I didn’t die,” Kassel said with a halfhearted laugh.

There is also the inherent indignity of the process to consider. Take Jana Jacobs, one of the plaintiffs in the Arkansas Supreme Court ruling whose wife gave birth to their two sons. Jana may not be biologically related to 4-year-old Jorgen or 18-month-old Finch, but she is as much their parent as Leigh is — certainly more so than the anonymous sperm donor whom the Arkansas Department of Health would rather place on her sons’ legal documents at birth. To file for adoption of her own child as a stepparent has been psychologically and emotionally taxing for Jana. For the state to insist on this label in the face of a Supreme Court precedent saying otherwise is invalidating of the Jacobs family and same-sex households nationwide.

In theory, the Arkansas Supreme Court ruling in favor of "basic biological truths" should affect different-sex married couples who conceive children via artificial insemination, as well. But there’s a practical loophole that prevents that from happening. Arkansas has a family law statute that allows husbands who are not biologically related to their wives’ kids to claim said newborns at birth. This allows them to sidestep the costly, time-intensive stepparent adoption process that married same-sex couples must undergo.

Jana Jacobs said that she has spoken with state Sen. Joyce Elliott about amending the language in Arkansas’ artificial insemination statute to be more gender-neutral and inclusive — i.e., changing “husband” to “spouse.” Elliott did not respond to requests for comment, but Jacobs said that the amendment is drafted and that the Senator is wrangling support for the bill before introduction on the Arkansas Senate floor. Till then, Jacobs urges state residents to contact state legislators about supporting the amendment, which could save same-sex married couples who use artificial insemination time, money, and untold stress.

But the amendment to the state’s family law statute won’t reverse the Arkansas Supreme Court’s decision, which Cheryl Maples, the attorney who represented Jana Jacobs et al in the Arkansas case, plans to challenge. She told Mic that she will file a petition for the Supreme Court to grant a writ of certiorari (i.e., agree to review her case), in the next few weeks. From there, it’s up to the courts, but Maples is hopeful that briefing procedures could begin in about six months.

Maples is also optimistic that the court will overturn the Arkansas ruling, as the five-justice majority who decided in favor of same-sex marriage two years ago remains on the bench. Should the Supreme Court uphold the birth certificate ruling, Maples will bring a new case with different plaintiffs to Arkansas federal court, but for now that’s just a hypothetical. Her focus rests firmly on the Supreme Court.

"I think it has a good chance of getting accepted by the U.S. Supreme Court," Maples said. "This 'biological' argument is really very weak … It is clearly discrimination against same-sex couples."

Forcing same-sex couples to undergo a costly and lengthy adoption process in order to claim guardianship of their children might be discrimination. It might violate Obergefell v. Hodges. But an Obergefell violation did not stop the Arkansas Supreme Court from upholding the legitimacy of that process. Nor did a potential Obergefell violation stop Texas' Supreme Court from agreeing to hear a lawsuit last week that aims to put an end to same-sex spousal benefits for municipal employees of Houston, the fourth largest city in the country.

If these and other cases can tell us anything, the struggle for recognition of LGBTQ families in the U.S. is far from over.