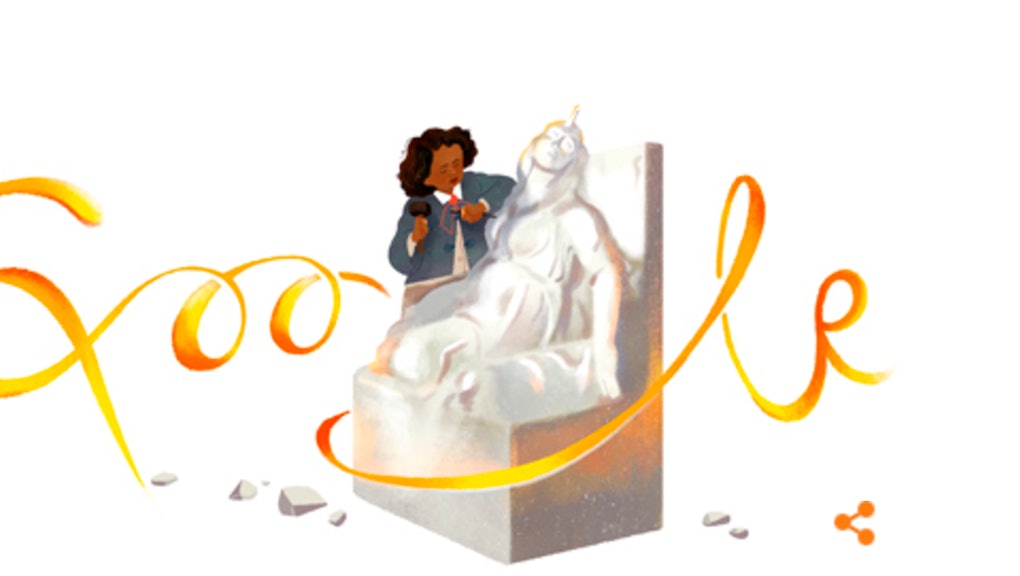 Today marks the beginning of Black History Month and to kick it off, Google's Doodle honors Mary Edmonia "Wildfire" Lewis, a black Native American sculptor whose works earned her international fame and recognition in the art world. In 2002, Lewis was named one of the 100 Greatest African-Americans in a biographical encyclopedia by Molefi Kete Asante, a professor of African-American studies at Temple University.

According to the Smithsonian Institute's biography of Lewis, she was born in New York in 1844. Her parents, a free black man and a Chippewa Indian woman, left her orphaned before she was five. Lewis later attended Oberlin College, where she studied sculpting. Her older brother financed her education through his work as a gold miner in California.

According to the Smithsonian, while at Oberlin, Lewis changed her name from "Wildfire" and took the name Mary Edmonia Lewis. She was accused of poisoning her two roommates and, although acquitted of the charge, Lewis faced "a severe beating by white vigilantes." After being accused of stealing art supplies, Lewis was prevented from graduating. But her lack of a degree would not stop Lewis's ambitions to become a sculptor.

In 1865, after selling medallion portraits of famous abolitionists to pay for the trip, Lewis embarked on a journey to Europe. She eventually settled in Rome, which, according to the Smithsonian, was a popular destination for American sculptors "because of the availability of fine white marble and the many Italian stone carvers who were adept at transferring a sculptor's plaster models into finished marble products."

One of Lewis's most famous sculptures, Forever Free, was created in 1867. Bonnie Claudia Harrison analyzed the importance of Forever Free, noting that "while the sculpture Forever Free observes both a neoclassical and romantic style, the sculpture's subject matter is both black and independent. In this way, Lewis disrupts the traditional neoclassical subjects that would have been her academic models."

The Death of Cleopatra

According to the Smithsonian, Lewis set herself apart from her contemporaries with her sculpture The Death of Cleopatra, which shows Cleopatra as she died rather than contemplating suicide.

Although many of Lewis's sculptures haven't survived, her works, which focused on ethnicity and humanitarianism, pushed the boundaries of neoclassical sculpture at the time. Citing newspapers from the time, the Smithsonian biography said Lewis returned to the U.S. in 1872 to "attend an exhibition of her own works at the San Francisco Art Association."

According to the Smithsonian, after 1875, "facts concerning the remainder of Lewis's life as well as the date and place of death are obscure and conflicting" – the Smithsonian Institute states that she died in London in 1907, but also notes that she "was last reported living in Rome in 1911." Meanwhile, the Hutchins Center for African and African American Research cites her date of death as 1909.