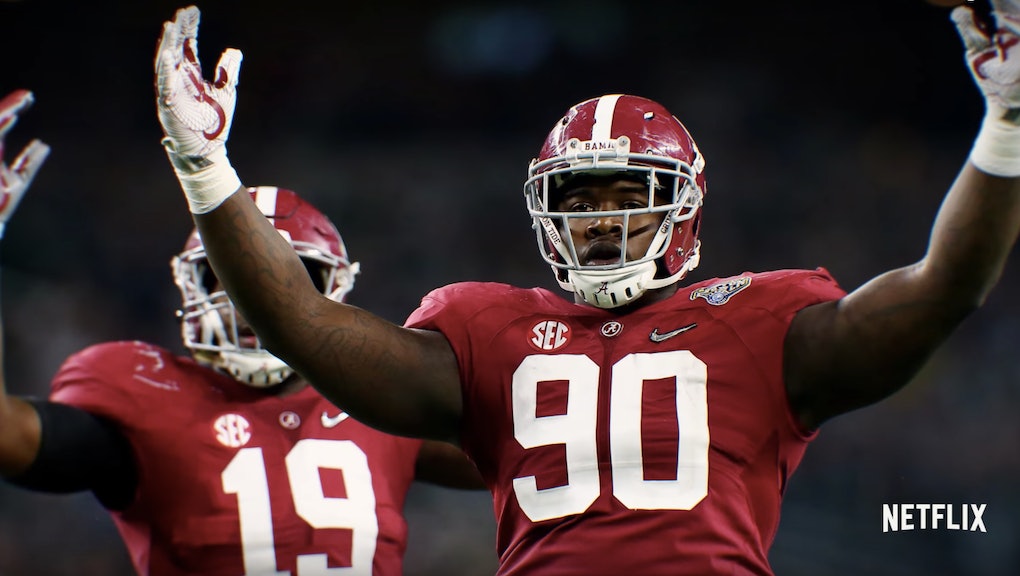 15 of the best sports documentaries on Netflix in 2017

Just about everyone can appreciate sports and the raw, athletic talent that it takes to compete at a professional level. These athletes dedicate their lives to perfecting their craft; it's a painstaking and exhausting process with a tortuous road often fraught with failures, injuries and endless struggle. And that's what many of these Netflix sports documentaries are all about: the journey to the top.

This is our list of the 15 best sports documentaries on Netflix in 2017.

Last Chance U follows a group of young athletes in search of NFL stardom. Each of them are very talented but while the East Mississippi Community College has one of the best football programs, their prestige has yet to be recognized. The stakes are high and there is much to lose, but this team is unconventional, and while many call their actions into question, their novel approach may end up propelling them to the top.

They may be young, but these little golf prodigies are taking the world famous Pinehurst course like seasoned pros. The Short Game follows preteen golfers as they compete to become the world champion.

Baseball has always been about the Fastball — the staredown between pitcher and batter as the two athletes pit their reflexes against each other. It all happens in the blink of an eye, or about 396 milliseconds. This sports documentary looks at the magic of baseball and remembers its greatest heroes and legends.

Unchained: The Untold Story of Freestyle Motocross covers one of the most dangerous sports in existence. Those athletes who participate in freestyle motocross put their bodies in harm's way on a daily basis as they leap their motorcycles across great chasms, performing unthinkable stunts in the process. If you're looking for a shot of adrenaline from the comfort of your couch, this is the sports documentary for you.

Muhammad Ali is one of the most iconic boxers in history. I Am Ali looks at the man behind the legend and gives viewers a look at never-before-scene footage from Ali's personal archive of audio journals. This sports documentary is for those who love boxing, and especially for those who love Ali.

Becoming the world's strongest man isn't just a hobby, it's a passion and lifestyle. Every waking moment must be dedicated to eating, working out, studying, competing and planning, not to mention trying to find time for family and friends. The competition in this sport is incredibly fierce, and Eddie Strongman captures the struggle of working towards the title of world's strongest man.

7. The Resurrection of Jake the Snake

Jake the Snake was one of the biggest names in wrestling, and The Resurrection of Jake the Snake examines the demons the led to his downfall, as well as his journey to reclaim his life.

John DuPont was a wealthy philanthropist with an unhealthy obsession with Olympic wrestling. Team Foxcatcher tells the story of how DuPont built a training facility for America's most talented wrestlers, then ultimately murdered one of them.

Uruguayan Formula 1 driver Gonzalo Rodríguez was as captivating off the track as he was on it. He always pushed himself and his car to the limits and made daring moves on the track, and his smile on the podium on was contagious. Gonchi la Película recounts this driver's story to the top and the fatal accident that changed everything.

Finding Traction isn't a racing documentary, at least not in the traditional sense. This documentary focuses on extreme runners who put their bodies through the ringer during a grueling 273-mile race through America's oldest hiking trail. Nikki Kimball is determined to become the fastest person to ever complete the race, but the physical demands take a massive toll on her body and mind in the process.

Featuring legendary skater Rob Dyrdek and seven other pro skateboarders, The Motivation looks at the challenges they overcome if they want to walk away with $200,000 and the title of the best skateboarder in the world.

This surf documentary by the renown Bruce Brown follows two young surfers around the globe as they search for the one thing every surfer dreams of: the perfect wave. The Endless Summer is the perfect sports documentary for those pining for warmer weather.

13. Stop at Nothing: The Lance Armstrong Story

Many considered Lance Armstrong to be the greatest cyclist in the world, until they found his dark secret: he was blood doping. The shocking revelation transformed his public image, but not everyone disagreed with his methods. Stop at Nothing: The Lance Armstrong Story delves into the world of this renown cyclist and sheds new light on the story you thought you knew.

Jeremy Lin was one of the most talented basketball players around, but his Asian heritage made it nearly impossible for him to get picked up by an NBA team. Finally, he got his opportunity, and Lin shocked the world with his skill. Linsanity is a feel-good sports documentary that tells of the meteoric rise of Lin's career.

Touching the Void is the ultimate sports documentary for those who like high-risk climbing. In the 1980s, two young climbers attempted to reach the summit of Siula Grande in Peru, a feat that had never been achieved at that point in time. Their adventure proves more perilous than expected, however, and one climber is left stranded on the mountain after falling into a crevasse. Touching the Void explains how he not only survived the fall, but also made it back down on his own with a broken leg.