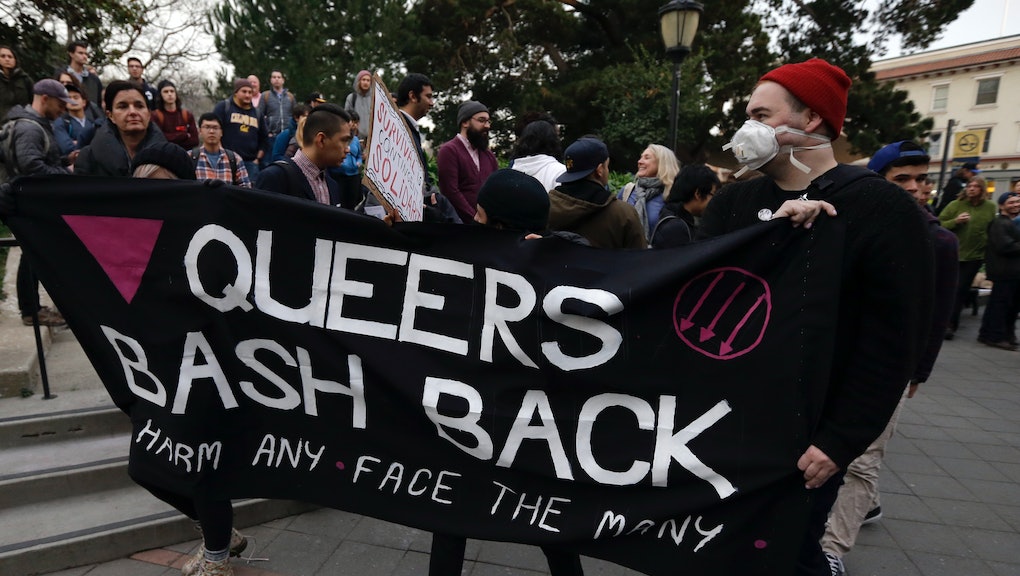 School officials canceled the final stop on right-wing provocateur and Breitbart-based internet troll Milo Yiannopoulos' speaking tour, a speech at the University of California, Berkeley, on Wednesday evening after protesters made it impossible for the event to continue.

According to media reports from the scene, student activists and anti-fascist demonstrators shot fireworks at the building where Yiannopoulos was scheduled to appear, while others threw smoke bombs and some damaged property. Some appear to have lit a fire on the campus' Sprout Plaza.

As City University of New York historian Angus Johnston noted, a Republican club at the University of California Los Angeles said Yiannopoulos cancelled a scheduled Thursday night appearance there after they were unable to accommodate his "long list of requirements" and became concerned over "public safety."

President Donald Trump sounded off on the protests Thursday morning, threatening to withdraw federal funding from the public university.

"If UC Berkeley does not allow free speech and practices violence on innocent people with a different point of view — NO FEDERAL FUNDS?" he wrote in a tweet.

On Thursday evening, University of California Regent and Lt. Gov. Gavin Newsom issued a statement, calling Yiannopoulos a "white supremacist," denouncing the "excessive response of a few protesters" and insisting "hatred has no home on California's public university campuses in any form, from vitriol to violence."

The statement blasted Trump for his threat to pull funding, deeming it "asinine" and saying it lacked foresight.

"President Trump is quick to attack American students, immigrants, women, the LGBT community, journalists and our international allies, but he is either too weak or too ignorant to stand up to white supremacists and others who spew hatred," the statement read.

"That's why the president and his extremist acolytes like Yiannopoulos need to hear from the resistance, loudly and repeatedly. We must continue to step in and stand up to resist reckless rhetoric and actions in a peaceful and forceful manner."