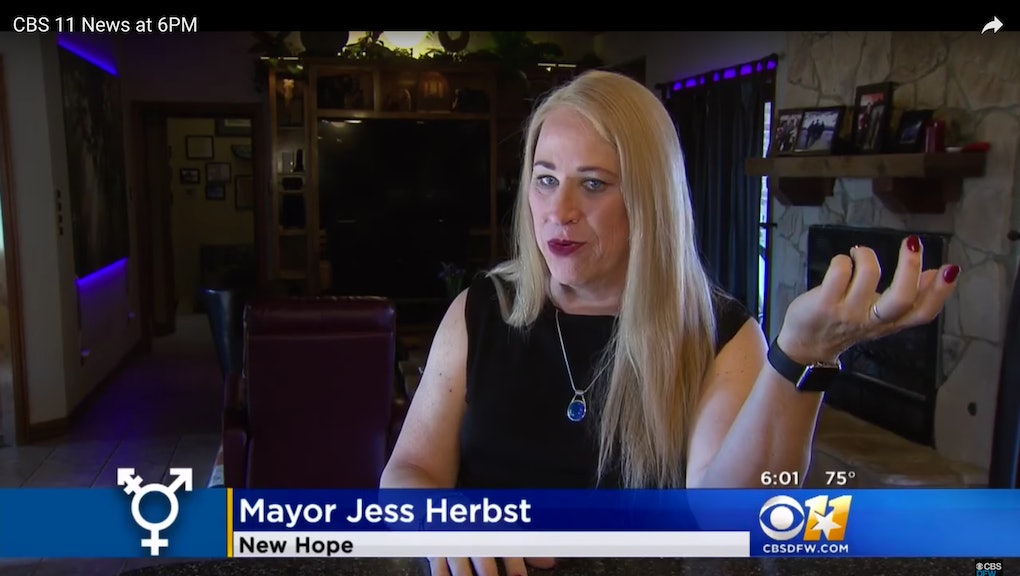 Say hello to the first out transgender public official in Texas, Jess Herbst.

In an open letter on the town's website, Herbst announced her transgender status to New Hope residents, the Texas Observer reported.

"As your mayor I must tell you about something that has been with me since my earliest memories," Herbst wrote. "I am transgender. Two years ago, with the support of my wife, daughters and son-in-law,  I began hormone replacement therapy. At the time, I did not imagine I would hold the mayor's position, but here I am."

She added, "I live my life as a female now, and I will be performing my duties to the town as such." Herbst said she is not "especially sensitive" to the pronoun she's called and expects people will need time to make the change.

According to Herbst's Facebook page, her ascendance to New Hope's mayorship was not through an election. She became mayor after the previous mayor suffered a heart attack. As the longest serving alderman on the council, the council appointed her to be New Hope's mayor in May 2016.

"Until this summer I was at best a part time person," she wrote in a personal blog post in November. "I kept my male persona for work, local politics, most day to day business and shopping. I if had to guess I would say my time was 70% male, 30% female."

It wasn't until her coming out letter that media outlets began to pick up the story. Herbst told LGBTQ Nation that her first town council meeting after coming out was "wonderful."

"Everyone was supportive," she said.

According to Herbst, she will not change her name legally until the next election due to "complications with the election code."

According to a CBS 11 broadcast, there hasn't been any uproar or calls for her removal since her coming out.

Herbst did not immediately respond to a request for comment.