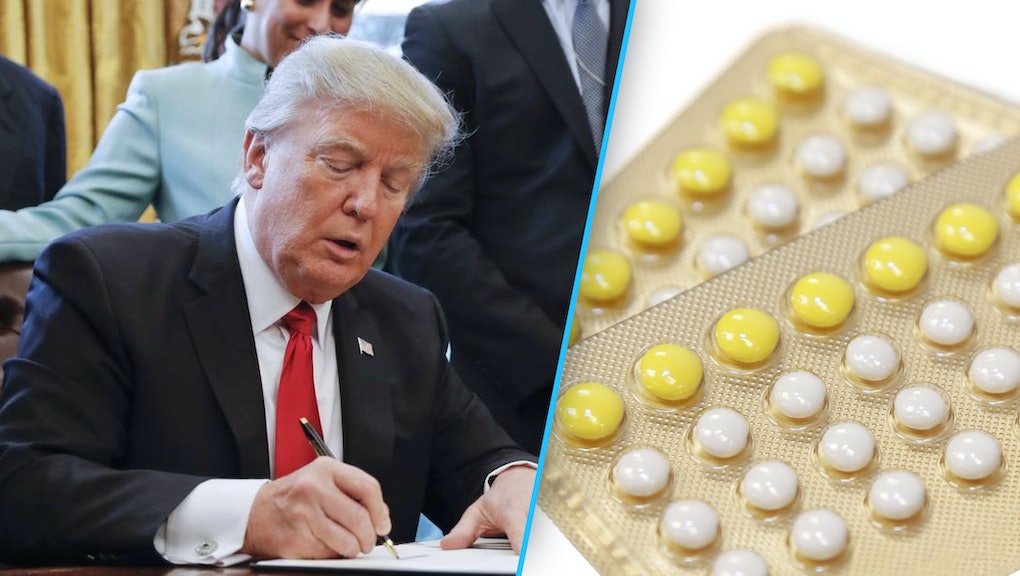 A leaked draft of an executive order, obtained by the Nation, indicates President Donald Trump may be ready to codify multifaceted discrimination.

The draft "Establishing a Government-Wide Initiative to Respect Religious Freedom" order was supposedly written to ensure that "Americans and their religious organizations will not be coerced by the federal government into participating in activities that violate their conscience," defining religious organizations as "any organization," according to the Nation. A White House official told ABC News the draft is one of hundreds currently on the table, but it's foreboding all the same.

That marriage is or should be recognized as the union of one man and one woman, sexual relations are properly reserved for such a marriage, male and female and their equivalents refer to an individual's immutable biological sex as objectively determined by anatomy, physiology or genetics at or before birth, and that human life begins at conception and merits protection at all stages of life.

In other words, the order allows people and companies to refuse service to LGBTQ individuals; refuse to acknowledge the existence of transgender and nonbinary people; and deny people access to contraception and abortion. It prioritizes the values of one's faith above all else.

"Since the beginning of his administration, the president has shown very little understanding, zero understanding, of the constitution or of the needs and wants of the people, especially the young people, in this country," Abbey Marr, a policy analyst at Advocates for Youth, said in an interview.

Marr works to advance reproductive and sexual health policy for young people and believes the draft order reflects a muddy understanding of the First Amendment. It protects the free exercise of religion, but not of one religion at the expense of another — or at the expense of particular groups.

Once again, women are among the groups hardest hit

In curtailing access to basic reproductive health care by making it an issue of an unrelated third-party's religion, Marr explained, the government paints "health providers as an adversary [to] their patients." What's more, the order denies medical care to those who already have trouble getting it, effectively doubling down on existing marginalization.

As far as reproductive rights go, similar exemptions already exist. Thanks to 2014's Hobby Lobby ruling, corporations owned by people with deeply held religious convictions can decline to offer employees insurance coverage for contraception. In the case of faith-based conflicts, nonprofits and "closely held" for-profits could opt out of the Affordable Care Act's mandate that insurance plans cover birth control. The difference now is that pretty much anyone could claim those exemptions, potentially allowing any and all employers to intrude upon conversations that should only ever exist between doctor and patient.

"The fact that the government is going to permit employers to insert themselves into this private medical decision, preferentially, is wrong," Dr. Diane Horvath-Cosper, reproductive health advocacy fellow at Physicians for Reproductive Health, an OB/GYN and abortion provider, said in a phone interview.

"People are concerned that this is going to affect their ability to get the health care they need and to get the birth control they rely on to be able to keep their jobs and take care of their families and plan when they want to have children," Horvath-Cosper said. The fear that birth control will become prohibitively expensive or simply inaccessible has translated to a post-election spike in requests for long-lasting contraceptives like IUDs and implants, both at Horvath-Cosper's practice and at other health care providers nationwide.

"When cost is not a barrier, people are more likely to choose more effective methods," she said. That's why Horvath-Cosper wants "evidence-based policy," she said, rather than policy designed to promote the beliefs of one religion over the rights of everyone else.

Some will suffer more than others

"If the goal is to decrease the risk for abortion, the no. 1 thing we can do is make a full range of contraceptive options accessible to as many people as possible for the [lowest] out-of-pocket cost," she said. "I mean, that's a no-brainer."

Time and time again, one simple fact about reproductive health is reaffirmed: The surest way to limit abortions is to improve access to affordable birth control, particularly options like IUDs and implants that eliminate human error.

When the government cuts off access to affordable health care, it tends to be the same groups that suffer: poor and low-income women, women of color, women in rural areas and young people. When the Trump administration and congressional Republicans take steps to codify, even expand, damaging policies that were already in place — like the Hobby Lobby decision or the Hyde Amendment — it sends the message that some people matter less than others.

More than just women, this latest draft executive order targets nearly everyone, which is why Horvath-Cosper underlined the importance of approaching the question of contraceptive access in a larger context that includes inequality on the basis of gender identity, race, income and sexual orientation.

"The way that we fight this is by coming together as a community and making sure that we're tying our struggle into the struggle of other people who are going to be oppressed by things like this," Horvath-Cosper said. "It's not enough just to see this just as a reproductive health issue. It all ties together, and I think we have to see this as part of a larger effort."