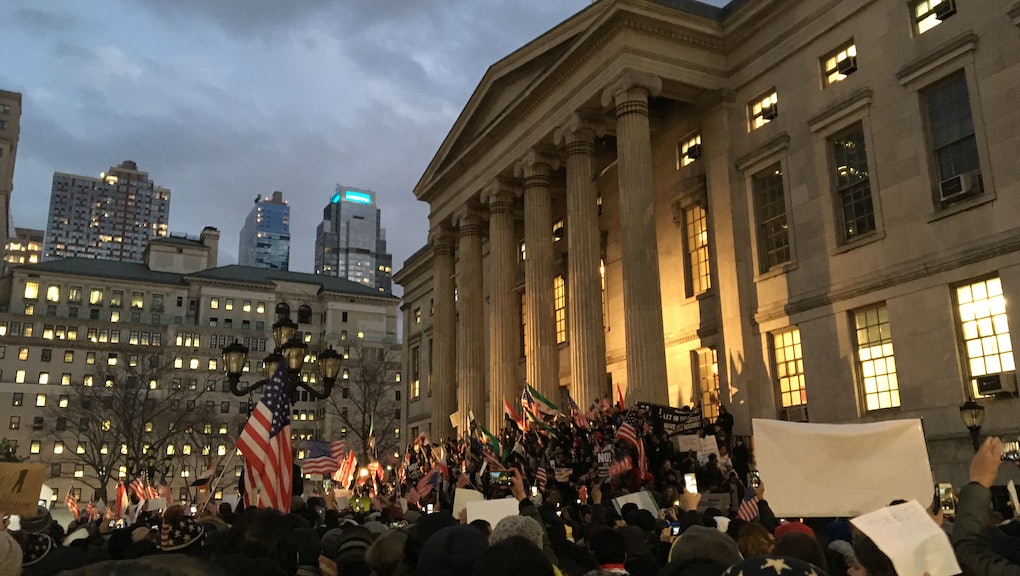 Yemeni bodega workers in New York rally around being American, Muslim and proud

NEW YORK CITY – Yemen Café in Downtown Brooklyn, N.Y., is best known for supplying the neighborhood with tender slabs of lamb, doughy pitas and slow-simmered ful medames. But on the afternoon of Feb. 2, its grill sat idle and its dining room empty.

Calls to the restaurant gave way to a prerecorded voicemail message:

Welcome to Yemen Café. We are sorry we are closed today, Thursday February 2, 2017. Our business is closed today in support of our families, friends and loved ones who are stranded at U.S. airports and overseas.  Our Yemeni community will be rallying in protest today, Thursday, February 2, 2017 at Brooklyn Borough Hall, 209 Joralemon Street, and we will be resuming business tomorrow, Friday, February 3, 2017. Thank you.

Yemen Café is just one of an estimated 1,000 Yemeni-American-run businesses, restaurants and bodegas in New York's five boroughs that, at noon on Thursday, shut their doors for eight hours in an act of protest against President Donald Trump's recently imposed travel restrictions that essentially amount to a ban on Muslims.

Fahd Alfakih, who owns the King Star Convenience store in Brooklyn, said in a phone interview before the protest that he planned to attend as a show of support for all affected by the travel ban and also to challenge what he said was a generally held misconception of what Yemeni-Americans were like.

"I want people to know that we never came to make any problems here," he said. "We came to be civilians, to know each other, to respect religions, to respect everyone and to have the freedom that I heard of when I watched back home before I came here."

"[Yemenis] are not the people they speak about in the media," he added. "We are going to show up today and show who we are. That's who we are."

And as night fell on the rally at Brooklyn's Borough Hall scheduled to take place in tandem with Thursday's bodega closings, show up they did — by the thousands, waving American flags and bearing signs that declared "We need justice."

The executive action signed by the president on Jan. 27 suspended the visas of temporary citizens from seven Muslim-majority nations, Yemen being one of them, and left travelers languishing in airports across America as immigration officials decided whether or not they should be deported.

It was a promise on which Trump had campaigned and a move designed to, in Trump's own words, "[protect] our own citizens and border," despite the fact that recent research from the Cato Institute found that nationalists from the seven countries targeted by the order had not committed a single act of terror on U.S. soil between 1975 and the end of 2015.

Although Alfakih, who moved to the United States in 2010 with his wife and child, wasn't in the airport at the time the ban went into effect, he said he had planned to travel to Yemen to visit family in February. Now, those plans have been put on hold out of fear that he won't be allowed re-entry.

The scene at Borough Hall

At 5:15 p.m., Yemeni-American bodega owners, city residents and allies flooded the square outside of Borough Hall for what would become a large and peaceful rally to cap off a day of protest.

The outdoor rally began with a prayer and featured remarks from activists, community leaders and city officials.

For 20-year-old Ayyad Amin, a rally attendee who said his family owns four bodegas across Manhattan and the Bronx, Trump's executive order hit especially close to home: Amin's mother, who has been trying to enter the United States since 2007, had her immigration case suspended in the wake of the ban.

Amin said his family of small-business owners was more American, not less, because of their faith.

"We are very proud to be Yemeni-Americans," he said. "We have one mission in life, which is to stand for peace and love and caring and not hate and racism, and that is because of our religion."

Amin knew the statistic about the lack of attacks by Yemeni nationalists on U.S. soil, and he questioned why countries that had committed domestic terrorism — like those linked to the deadly attacks on Sept. 11, 2001 — were left off.

"Donald Trump's executive order doesn't really make sense because if we look into 9/11, most of [the attackers] were from Saudi Arabia, Egypt, Lebanon and the United Arab Emirates," he said. "If the ban stands to protect American people and our national security, those countries should also be on that list."

Trump's temporary ban on travel for families like Alfakih's and Amin's is particularly unfortunate given Yemen's current political climate.

Since 2015, the country has been embroiled in a bloody civil war that Western media has, by and large, failed to cover in a meaningful way.

In the country, dire food shortages have left half a million children gaunt and starving. Access to medical supplies is so scarce that a child under five dies every 10 minutes of preventable causes, United Nations humanitarian chief Stephen O'Brien recently told the UN Security Council.

Amin said that, especially during a time of war, having his countrymen blocked from entering the U.S. could make one feel "unwanted" or "rejected."

"I am very proud to say that I'm a U.S. citizen, but I am also a person who is educated and who knows right from wrong," he said. "I care for this country and my homeland. I stand for peace."

Alfakih said that everything he had seen and heard about the United States while he was living in Yemen suggested that it was a country of freedom for all, but said that Trump's temporary ban on Yemeni immigrants and refugees had challenged his belief in that idea of freedom.

But when it comes to America's future, Amin takes a more optimistic view.

"If we have a leader who represents 320 million U.S. citizens and whose agenda and mission stands for hate and racism and discrimination, then we will never find peace or love or caring for each other," he said. "But if we have a leader who stands for peace and love and compassion, we will be as one nation that loves and supports one another. And I have hope."