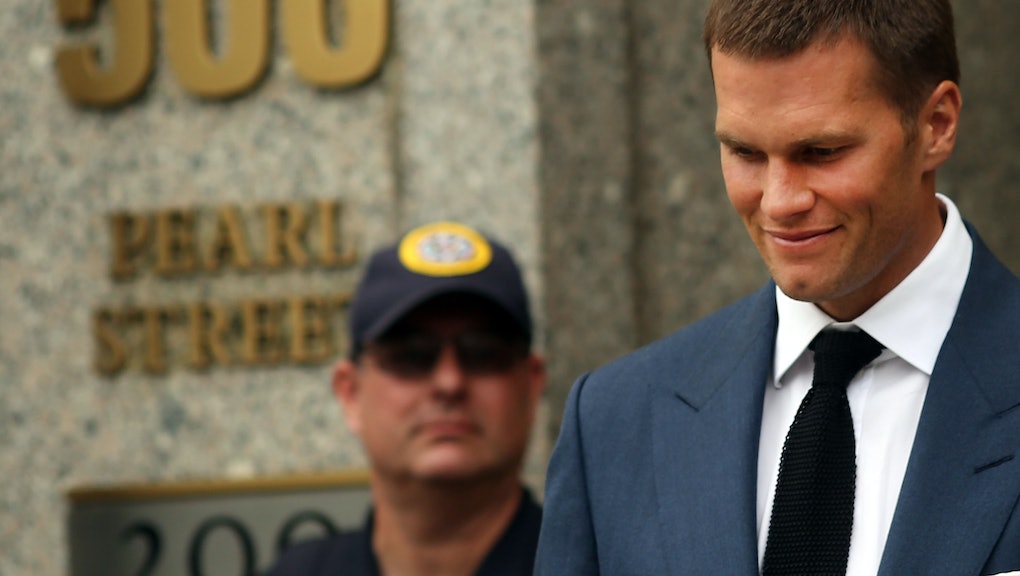 What was "Deflategate?" What to know about the 2015 Tom Brady controversy.

New England Patriots quarterback Tom Brady began this season in exile, serving a four-game suspension for his role in the 2015 "Deflategate" scandal. Now, heading into the Super Bowl for the 8-billionth time in his storied career, he may find himself being handed a championship trophy by the very man who brought the hammer down on him — bumbling NFL commissioner Roger Goodell.

If that happens, it will be an awkward and hilarious next chapter in this seemingly unending pissing contest between the Patriots' pure evil and the NFL's bureaucratic incompetence.

But how did we get here?

During a 45-7 whomping of the Indianapolis Colts to advance to the Super Bowl, Brady had a pass picked off by Colts linebacker D'Qwell Jackson, who brought the football to a member of the team's equipment staff. The staffer noticed the ball appeared underinflated, and the team notified the NFL.

According to NFL rules, footballs must be inflated to a gauge pressure between 12.5 and 13.5 pounds per square inch (PSI). But teams provide their own footballs to use on offense because quarterbacks have different preferences within those parameters — thanks to a 2006 rule change, which Brady helped get approved. Several of the balls provided by the Patriots were found to be around 12.5 PSI — a potential advantage.

Both Brady and coach Bill Belichick denied having purposely underinflated the footballs, with the quarterback calling the suggestion "ridiculous."

The investigation and punishment

A league investigation found that it was "more probable than not" that members of the equipment staff — one of whom referred to himself in a memorable text message exchange as "the deflator" — had purposely underinflated the footballs, and that Tom Brady was likely "generally aware" of it.

In May 2015, the NFL announced that Brady would be suspended without pay for the first four games of the following season, and that the Patriots would be fined $1 million and stripped of their first round draft pick in 2016 and their fourth round pick in 2017.

"Your actions as set forth in the report clearly constitute conduct detrimental to the integrity of and public confidence in the game of professional football," NFL executive president Troy Vincent wrote in a letter to Brady. "The integrity of the game is of paramount importance to everyone in our league, and requires unshakable commitment to fairness and compliance with the playing rules."

Brady appealed the suspension through the NFL Player's Association, but commissioner Roger Goodell upheld the punishment. However, the investigation and ensuing Wells Report was found to have significant flaws, and Goodell seemed to have misrepresented evidence in his decision to uphold the sanctions.

In September 2015, a U.S. district judge threw out Brady's suspension, saying Goodell had administered "his own brand of industrial justice."

But the saga continued in the spring of 2016 when the NFL appealed the ruling and a federal appeals court ruled in favor the league, maintaining that Brady had been treated fairly and must serve his suspension.

Though he initially planned to continue his legal battle, Brady announced in July that he would serve his punishment and sat out the first four games of the season. The Patriots went 3-1 in those four games, went 14-2 overall and will take on the Atlanta Falcons on Feb. 5 in an attempt to win their fifth Super Bowl in the Brady-Belichick era.

The legacy of Deflategate

Deflategate was dumb. Both Brady and Goodell came out of it looking stupid, and the whole mess continues to hurt the NFL's image. Brady's four-game suspension — compared with the two-game suspension Baltimore Ravens running back Ray Rice initially received for beating his girlfriend — reaffirmed for many that the NFL is more concerned about trivial things like ball-inflation, touchdown dances and uniform violations than it is about domestic violence and player safety.

In an interview with the New York Times, President Donald Trump, a famous Twitter user who sometimes plays golf with Tom Brady, defended the 39-year-old quarterback on Thursday ahead of the Super Bowl, calling Goodell a "dope" – a rare true statement from the "alternative facts" president.

"Belichick comes over in his Patriots sweatshirt and the hoodie and the whole thing," Trump told the Times. "He hugs me, and he kisses me, and he said: 'I love you. You’re the greatest.'”

“He just feels warmly toward me, Belichick does,” Trump said. “Isn’t that the craziest thing?”