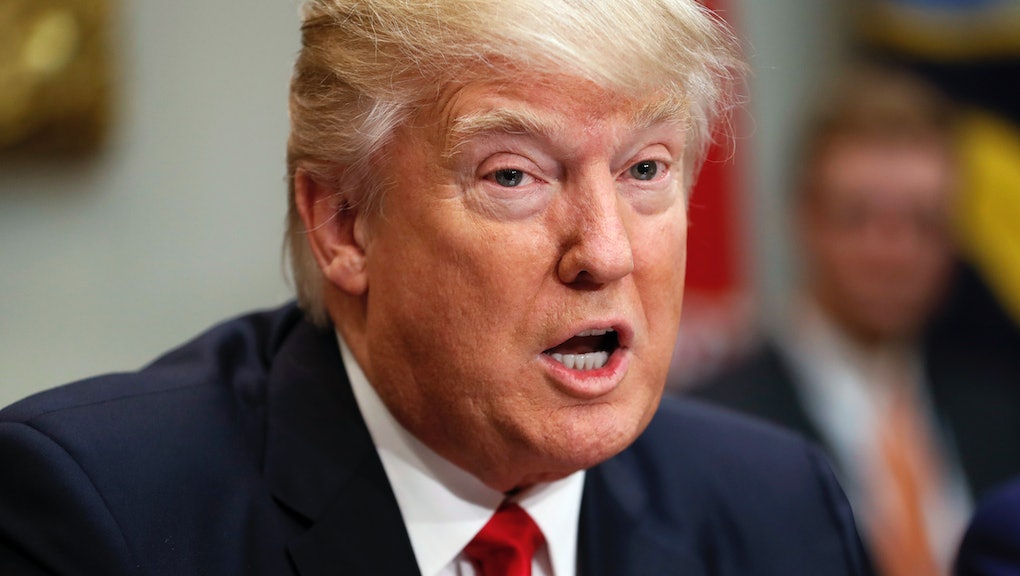 Trump signs executive order, memo that could make it harder to get trustworthy financial advice

President Donald Trump signed an executive order midday Friday calling for a formal review of U.S. financial regulation, widely understood to mean the Dodd-Frank Act, the law passed by Congress to reform Wall Street and protect American consumers in the wake of the 2008 financial crisis.

Earlier on Friday Trump insinuated he intended to loosen lending standards under the law: "We expect to be cutting a lot out of Dodd-Frank, because frankly I have so many people, friends of mine that have nice businesses and they can't borrow money," he said at a press conference alongside a group of executives. "They just can't get any money because the banks just won't let them borrow."

It is not yet clear exactly what changes could result from that order — since actually reforming the law will be a lengthy process. Yet there are ways Trump could weaken Dodd-Frank without congressional sign-off, said Mike Konczal, a fellow with the left-leaning think tank Roosevelt Institute.

"If you have lax enforcement you don't really have the regulation," Konczal said, noting that Trump could direct his Treasury secretary to withhold his signature on certain actions where he is required to sign off. That could weaken, for example, "certain powers [permitted by Dodd-Frank], like designating a nonbank firm to follow bank regulations because it poses a risk."

One person who might benefit from the order? Trump himself: The review of Dodd-Frank is widely expected to lead to looser lending standards that could benefit real estate developers by driving up property prices.

But it's Trump's second action Friday — signing a memo to reexamine the labor department's "fiduciary rule" — that might be the biggest concern for consumers worried about their finances.

The fiduciary rule, which could potentially be rescinded altogether, was originally expected to go into effect in April. It would legally require all financial advisers to act in retirement savers' "best interest," including disclosing any conflicts of interest and being transparent about excessive fees.

It might come as a surprise to some that many advisers don't already have to meet the fiduciary standard.

Currently advisers are held to a much lower standard, known as "suitability" — meaning that any investment that they suggest just has to be appropriate for a client, not necessarily what the person needs most.

In other words, the rule would make advisers more like doctors, who are obligated to protect you.

Say you had cancer: Would you want your MD to treat your illness — or just give you drugs for pain? While the meds might technically be "suitable," that line of treatment is clearly not in your "best interest."

While the quality of retirement investment advice might not seem like a pressing issue to young people, millennials might actually have the most to lose from the change, Konczal said.

"How you set up your first retirement account at your first job, the quality of advice you're getting is really important," Konczal said. "It could affect the arc of savings over the course of your entire life. The way these things are set up really matters — they're really sticky."

Just how much money are we talking? As the years pass, it could be tens of thousands of dollars — lost to fees you didn't even know you were charged.

Unsurprisingly, the fiduciary rule is generally hated by the financial services industry, which claims it would be counterproductive and make getting financial advice too expensive. (There's evidence that's not necessarily true.)

As for Dodd-Frank, and its initiatives that protect Americans' money — including the creation of the Consumer Financial Protection Bureau — watchdog groups have expressed concern about how Trump's review of the law could play out.

The CFPB is the agency that protects consumers from misleading financial advertising, scams and dubious banking practices — such as when Wells Fargo employees were caught setting up duplicate accounts that clients didn't request, in order to meet higher sales quotas.

One possibility for reform is replacing current CFPB leadership — which is known for being tough on financial industry misbehavior — with enforcers who are more aligned with the administration's pro-business agenda.

At least one group is happy about Trump's latest executive order: Shares of the Financial Select Sector SPDR ETF — an index of companies in the financial services industry, including Wells Fargo, JP Morgan Chase and Bank of America — was up nearly 2% as of Friday afternoon.