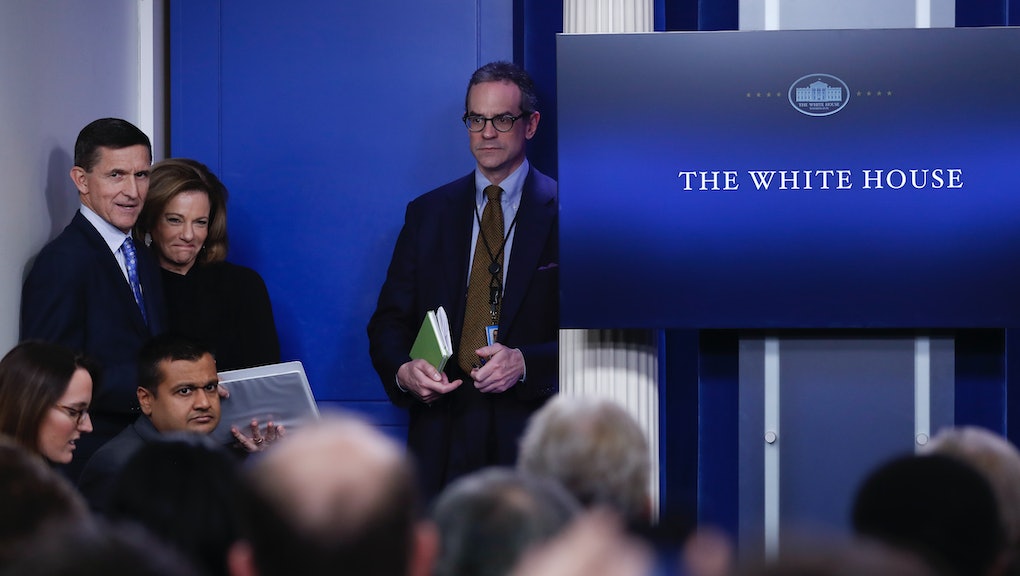 Former Breitbart boss Steve Bannon has been the focal point of fears that President Donald Trump's administration is taking the nation on a breakneck roller-coaster ride to the far right. But another ultraconservative has emerged from the cloak of pseudonymous Trump-boosting to earn the president's ear: Michael Anton.

The most famous of the essays, called "The Flight 93 Election," made a case for conservatives to rally behind Trump despite his dubious bona fides because the threat of a Hillary Clinton presidency was too great. The piece caused a furor on the right, and came in for criticisms even from some of Anton's ideological comrades.

Now, Anton has at once been revealed as the man behind Publius and also a force in Trump's White House:

Anton also did some less splashy writing under his own name. He wrote for the neoconservative Weekly Standard, which unmasked him and broke news of his role in the administration on Thursday.

Despite publishing Anton, Weekly Standard founder and editor at large Bill Kristol was disturbed by his elevation to the Trump White House — linking Anton to Bannon.

"The Bannon-Anton wing of the Trump White House has a penchant for semi-conspiratorial analyses and semi-kooky prescriptions," Kristol said in an email on Friday. "And for them, being responsible isn't a virtue. Which is worrisome."

Kristol was quick to distance the Standard from Anton's pseudonymous works. His "writings for the Standard are quite different from his (in)famous 'Flight 93' essay written pseudonymously last September," Kristol said.

Kristol even went so far on Twitter Friday as to compare Anton to the Nazi political theorist Carl Schmitt:

Anton could not immediately be reached for comment. The White House didn't respond to an inquiry.

Some of Anton's former colleagues, though, offered praise.

Anton's pseudonym, Publius Decius Mus, is a salute to the ancient Roman consul who legendarily gave his own life to save his people. The essay's premise compares Trump's battle against Hillary Clinton to the doomed 9/11 United Airlines flight, in which passengers valiantly fought back against their terrorist hijackers before the plane went down in the fields of Shanksville, Pennsylvania.

2016 is the Flight 93 election: charge the cockpit or you die. You may die anyway. You — or the leader of your party — may make it into the cockpit and not know how to fly or land the plane. There are no guarantees. Except one: if you don't try, death is certain. To compound the metaphor: a Hillary Clinton presidency is Russian Roulette with a semi-auto. With Trump, at least you can spin the cylinder and take your chances.

The lengthy piece posed the election as a clash of philosophies in which Trump was the only rational choice for those who hoped to trade conservative principles for the prevailing liberalism:

All of Trump's 16 Republican competitors would have ensured more of the same — as will the election of Hillary Clinton. That would be bad enough. But at least Republicans are merely reactive when it comes to wholesale cultural and political change. Their "opposition" may be in all cases ineffectual and often indistinguishable from support. But they don't dream up inanities like 32 "genders," elective bathrooms, single-payer, Iran sycophancy, "Islamophobia" and Black Lives Matter. They merely help ratify them.

The Flight 93 piece got dragged not only by the left, but by prominent conservatives like Ben Shapiro, who quit Breitbart over the site's treatment of fellow writer Michelle Fields after an incident with then-Trump campaign manager Corey Lewandowski.

Shapiro slammed the essay on Daily Wire as "a shoddy straw man, filled with outright misrepresentations and silly analogies" and "pure, unadulterated Trumpsterism masquerading as high-minded conservatism," not to mention "an apologia for Pat Buchananism."

That Trump is trying to make good on some of his hardline campaign promises is no secret.

But the emergence of Anton from the cover of anonymous writings to the highest levels of government sheds new light on where the leader of the free world is getting some of his ideas — and how he may try to bring them fruition.