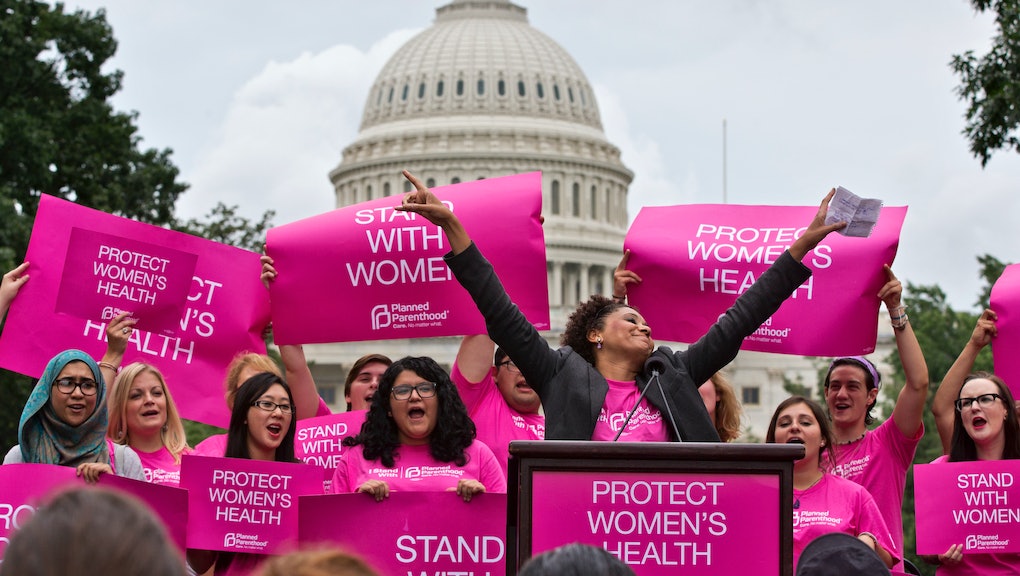 This is what happens once you've defunded Planned Parenthood

If one thing's clear about Trump's America, it's that Planned Parenthood is under attack. The women's health organization has already been targeted by Republican legislators, while President Donald Trump advocated to defund the organization throughout his campaign.

Contrary to popular opinion, Planned Parenthood does not receive federal funding in the form of block funding or a government grant. While the organization does receive some grants specifically for family planning services through the government's Title X program, most of Planned Parenthood's federal funding comes in the form of Medicaid reimbursements for services provided to Americans covered by federal health plans.

While the organization has come under attack for its abortion services, it's important to note that these services are not performed using any federal money. The Hyde Amendment specifically prohibits federal money from being used on abortions except in cases of rape, incest and endangerment of the mother's life. Title X funds are also specifically prohibited from being used on abortions.

This emphasis on Medicaid funding, however, means that defunding Planned Parenthood directly hurts the low-income women who need them the most — and, by extension, the American taxpayer.

Here's what to know if the organization gets stripped of its federal funding.

Who will be affected?

The primary victims of defunding Planned Parenthood would be women of reproductive age who are on Medicaid, which is the largest source of reproductive health care coverage in the U.S. The Kaiser Family Foundation reported that 17% of all women ages 19-64 are on Medicaid as of 2015, and the insurance provider finances almost half of all U.S. births and 75% of publicly-funded family planning services.

Revoking Medicaid coverage would particularly impact women of color. A 2012 Kaiser study revealed that while only 9% of white women are covered by Medicaid, the insurer covers 21% of African-American women, 18% of Hispanic women, 22% of Native American/Alaskan Native women and 10% of Asian/Pacific Islander women.

Similarly, women who take advantage of Title X programs — who, the National Abortion and Reproductive Rights Action League reported, are often ineligible for Medicaid — are also disproportionately women of color. While African-American and Hispanic women make up 13% and 17% of the total population, respectively, they make up 21% and 30% of all Title X clients, NARAL reported.

Planned Parenthood is not the only publicly funded family planning clinic for these low-income women, but it is the one they depend on the most. Though Planned Parenthood clinics only make up 11% of all publicly-funded family planning health centers, the organization reports that they provide services to 36% of women who need publicly-funded care.

Opponents of Planned Parenthood have pointed to these other clinics as an alternative for low-income women seeking care. That solution, however, seems to be untenable in reality. Funding cuts to Title X have already forced many public clinics to close or reduce their hours, and community health centers, Health Affairs Blog noted, are unprepared to deal with an influx of Planned Parenthood patients and also provide other services that prevent them from dedicating more resources to women's health.

In many areas, there aren't many other alternatives to Planned Parenthood to begin with.

"I think the notion that people would automatically have another provider is erroneous," Planned Parenthood Michigan President and CEO Lori Carpentier told an ABC affiliate in her home state. "By definition, Planned Parenthood's work to place their health centers in areas where patients are often under served, especially patients who utilize the Medicaid program, so the notion that people can [go] elsewhere is just wrong, so many people will go without care."

Any possible alternatives Republicans have in mind might also be woefully unequipped to provide reproductive care services. When the state of Louisiana attempted to strip the organization's funding, the list of alternative providers their attorneys drew up included such inappropriate suggestions as dentists, cosmetic surgeons and nursing home caregivers.

The personal cost of defunding

The greatest impact defunding Planned Parenthood will have, of course, is on the lives of the women it helps. The organization revealed that in 2010, publicly funded family planning services helped to prevent two million pregnancies, and both abortion and unintended pregnancy rates would have been 68% higher without its help.

States that have already made the choice to defund Planned Parenthood have illustrated how disastrous this move can be. Texas, most notably, severely cut its family planning funding and de-prioritized Planned Parenthood in 2011 before going on to completely cut Medicaid funding for the organization in 2013 — and the effects were devastating.

A study published in the New England Journal of Medicine revealed that after Texas excluded Planned Parenthood from its funding, the number of requests for long-acting reversible contraceptive methods, such as IUDs, decreased dramatically in counties that had Planned Parenthood clinics, while the number of childbirths increased among women who previously used these contraceptive methods before the funding cuts.

A separate study published in the American Journal of Public Health found that women's health organizations served 54% fewer clients in 2012-2013 than they did in 2011, prior to the funding cuts. Title X clinics, such as Planned Parenthood, are also notable in that they allow underage women to obtain care without parental consent or notification, as well as provide coverage to undocumented immigrants. Without this federal funding, the study noted, teenagers and immigrants have fewer options for care.

An analysis conducted by the state's government, similarly, projected that 283,909 women would lose access to family planning services in 2012-2013 and there would be an additional 20,511 births. Most dramatically, a study published in Obstetrics & Gynecology revealed that the maternal mortality rate in Texas doubled following their funding cuts.

Texas restored much of its funding in 2013, but its effects are still felt by Texan women seeking care. A May 2015 study by the Texas Policy Evaluation Project revealed 55% of women in the state have at least one barrier preventing them from accessing reproductive health care. A January 2016 NPR article reports that only 22% of women who qualify for subsidized women's health care actually receive it.

Other states, too, have paid a harsh price for their efforts to combat Planned Parenthood. When Kansas took steps to defund Planned Parenthood in 2014 through Title X funding, the number of residents receiving Title X services decreased by 37%. In Indiana, Vice President Mike Pence slashed Planned Parenthood's funding as governor — and it resulted in a massive HIV epidemic.

In addition to the personal cost faced by Planned Parenthood's low-income patients, defunding Planned Parenthood has an economic cost. For every $1 invested in federal family planning services, the Guttmacher Institute revealed that the American taxpayer saves $4 in unintended pregnancy Medicaid costs and $7 in total costs, which includes not only pregnancy and birth costs, but also such costs from such conditions as cervical cancer, HIV and sexually transmitted diseases and infertility.

In total, family planning services save taxpayers $13.6 billion. A 2015 study by the Congressional Budget Office concluded that because of the additional costs that would be incurred by the higher birth rate among women with Medicaid, permanently defunding Planned Parenthood would increase Medicaid spending by $130 million over a ten-year period.

Republican legislators now have to ask themselves: Is denying health care to millions of women worth the cost?