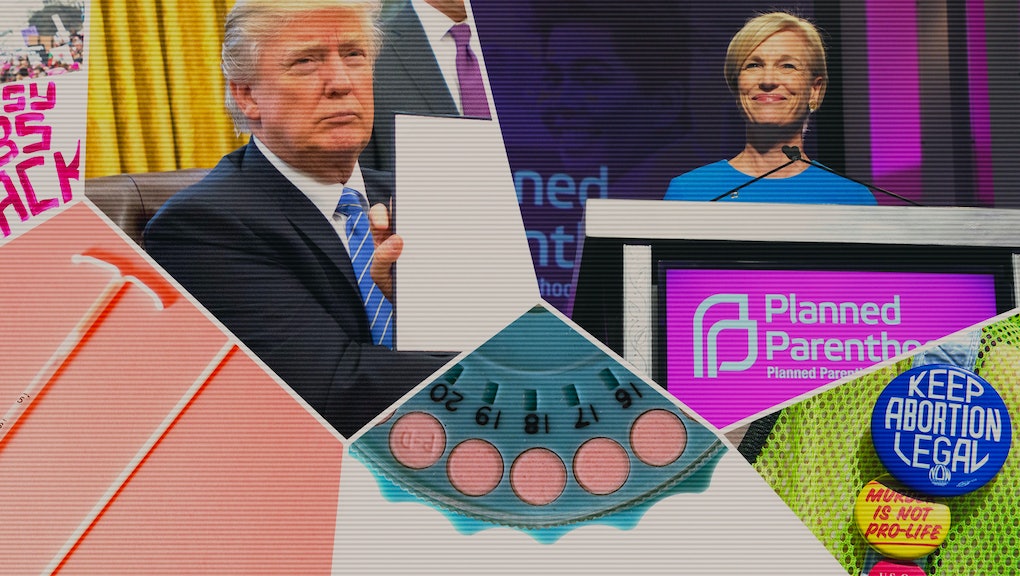 In top-line reproductive rights news, the Nation leaked a draft of President Donald Trump's impending "religious freedom" executive order, which spells disaster for thousands of Americans — including those who rely on access to contraceptives through their employer.

The order allows people and companies to refuse service to LGBTQ individuals and deny employees access to contraception and abortion if doing so conflicts with their religious convictions.

"People are concerned that this is going to affect their ability to get the health care they need and to get the birth control they rely on to be able to keep their jobs and take care of their families and plan when they want to have children," Diane Horvath-Cosper, reproductive health advocacy fellow at Physicians for Reproductive Health said in a phone interview on Thursday.

Many Americans already had these worries following the Supreme Court's 2014 Hobby Lobby ruling, which decreed that corporations run by people with religious beliefs can deny their employees coverage for birth control.

Trump's executive order would make it a blanket option for not just corporations but any person or company who'd like to claim religious exemptions — a salient reminder that the worst may be yet to come.

Here's what you might have missed this week — the good, the bad and the garbage:

• On Tuesday, Trump named his pick for Supreme Court justice, Judge Neil Gorsuch. Considering Gorsuch's record serving on the 10th Circuit Court of Appeals, Trump's appointment would likely overturn Roe v. Wade if given the opportunity. But even if he never encounters such a case while on the bench, he can wreak plenty of havoc on Planned Parenthood and women's access to contraceptives in the meantime.

• And Sandberg wasn't the only high-profile contribution the health care provider saw this week — the dating app Bumble donated the $50,000 dollars, the amount it made on Jan. 26, when it pledged 10 cents for every match made on Bumble BFF.

• On Tuesday, Rep. Barbara Lee (R-Calif.) reintroduced the EACH Woman Act, a House Resolution that would overturn the Hyde Amendment and help over 28 million people in the U.S. get abortion coverage.

•  The same day, the Iowa Senate Judiciary Committee voted 8-5 to shoot itself in the foot, opting out of a Medicaid program that would route around $3 million to state family planning resources. The end game? Cutting off funding for Planned Parenthood. Opponents pointed out the legislation would only end up costing more in the long run, and in other states — ahem, Indiana — waging war on Planned Parenthood has ended in public health crises. In any case, the Senate will vote on the bill next.

• A Republican Senator in Oklahoma proposed legislation this week that would legally term abortion "murder." If the bill passes, it would not only mean that doctors performing abortions could be charged with first-degree murder, but that they could be executed for it — yes, executed. In Oklahoma, first-degree murder is punishable by the death penalty.