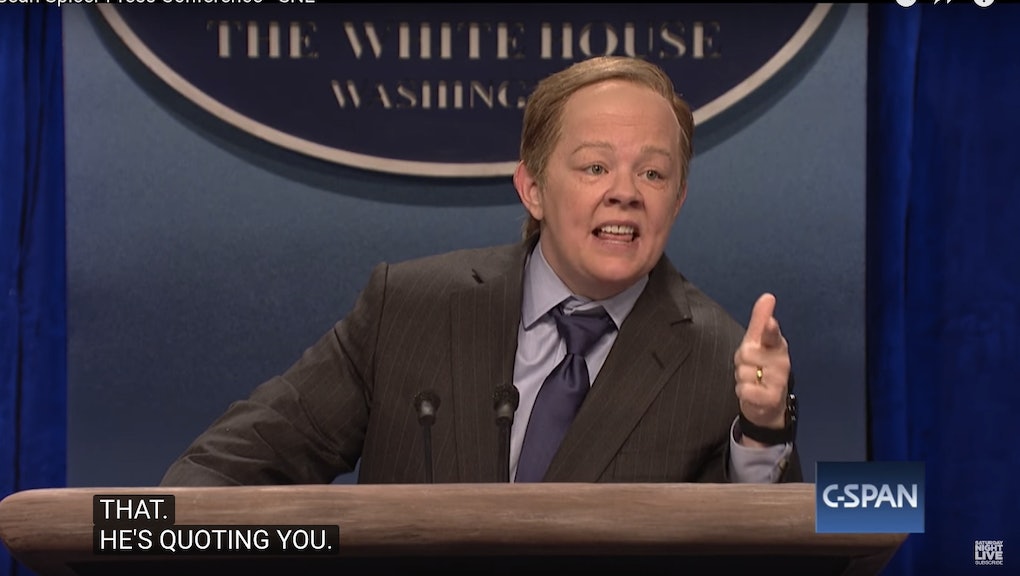 Sean Spicer, the current White House press secretary and a man who eats 35 pieces of cinnamon gum every day before noon, is something of a joke. A joke that would be funny if it weren't real life. Anyway, it was only a matter of time before Saturday Night Live went after Spicer, his ill-fitting suits and his uncomfortably combative manner of dealing with the press.

Adopting her squeakiest gravel voice, Melissa McCarthy donned a beige comb-over on the Feb. 4 episode. As Spicer, she bullied and gaslit journalists from the New York Times, Wall Street Journal and CNN, whose White House correspondent was caged in the corner of the room.

"Before we begin, I know that the press and myself have gotten off to a rocky start," McCarthy as Spencer said. "When I say rocky start, I mean it in the sense of Rocky, the movie, because I came out here to punch you in the face. And also I don't talk so good."

The SNL sketch parodied Spicer's recent Twitter gaffe, in which he accidentally shared what appeared to be a password with the whole internet, as well as less-than-knowledgeable education secretary nominee Betsy DeVos. Kate McKinnon's DeVos remained unable to differentiate between growth and proficiency in measuring students' progress, a point of contention during her confirmation hearing.

"I don't know anything about school," McKinnon as DeVos mused, "but I do think there should be a school, probably Jesus school, and I think it should have walls and roof and gun for potential grizzly."

All in all, a picture of Donald Trump's White House that hits a little too close to home. Maybe Spicer's press conferences would be more enjoyable if he were to use boxes of props, per SNL's suggestion. Maybe.