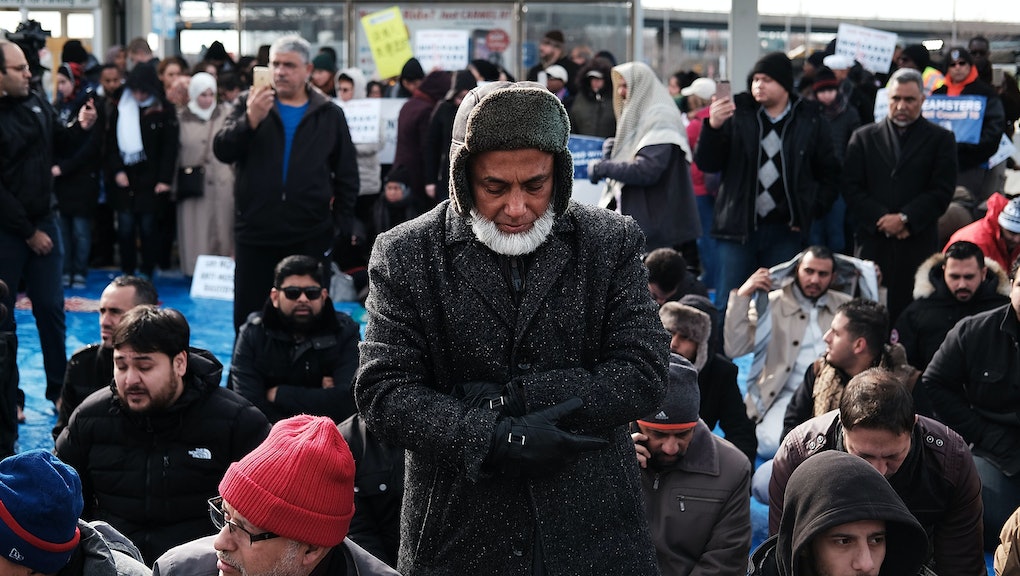 An imam gave a moving sermon at JFK. Everyone feeling worn out by Trump needs to read it.

Hundreds of Muslims gathered on Friday out front of John F. Kennedy Airport's international arrivals gate for a prayer — a prayer for the detainees across the country and for the emancipation of Muslim people from prejudice faced under President Donald Trump's administration.

As lawyers worked around the clock inside the airport, Imam Talib Abdur-Rashid of the Islamic Brotherhood in Harlem gave a short sermon in the biting cold to the crowd, an assemblage not just of Muslims, but of Christians, Jews and other allies as well.

He spoke to what he described as a singularly vital moment in the history of emancipatory struggles, invoking Dr. Martin Luther King, Jr.'s concept of a beloved community, and laying out a vision for the "intersectionality of justice issues."

After a short prayer, he chose a passage from the Quran that said, "And of his signs is the creation of the heavens of the earth, and the diversity of your languages and colors. Surely in that are signs for those who know."

We've transcribed the rest of his remarks in full, edited lightly for grammar and clarity. Here's what he said.

Sermon at the arrivals' gate

"That which motivates us is not only a desire for justice, but it is a common vision of hope and a common aspiration for what is called 'the beloved community.' Some people call it a 'beloved community,' some people call it a 'model community.' It is the same. Two months from now, — this is February, March, April — it will be the 50th memorial anniversary of the sermon delivered by the late Dr. Martin Luther King Jr. in which he raised his voice against the Vietnam War, and against what he called the 'triple evils' of militarism, racism and poverty.

And here we are now, 50 years later, still standing or needing to stand against poverty, against racism and against militarism. And Dr. Martin Luther King Jr. said that the beloved community is a global vision. It's one in which the wealth of the world is shared by all of the people of the world. It's a community in which poverty, hunger, and homelessness are eliminated because of an international standard of decency. He said that the beloved community is characterized by the elimination of racism and discrimination, bigotry and prejudice.

We who are Muslims, we know that in Yathrib, now called Medina, that during the time of the prophet Muhammad — may the peace and blessing of Allah be upon him — that when he and the Muslims migrated from Mecca to Yathrib, they formed, at first, a model for a beloved community. They entered into a social contract with those people who are Jews, and those who were polytheists, and said 'We are all members of one society, and therefore it was written in a charter, we are one umma. We are one people.'

They built that until oppositional, political designs came into play. And after a while, that beloved community, which was diverse community, began to turn toward conflict. In Europe, in Córdoba, Andalusia, centuries ago, they built a society that was a beloved community. There were Jews, Christians, and Muslims there living in peace in a flourishing civilization that was the heigh of civilization in Europe until oppositional, political designs came into play. There was a war, and the Muslims and the Jews were put out.

America. If we look at the founding documents of America — the Constitution, the Declaration of Independence, the Bill of Rights — they paint a picture of a beloved community. But every time throughout American history, when the majority of the people have tried to mold America into a beloved community, there's always been a group of people who were in opposition.

So when America was founded, it was founded on the backs of enslaved Africans and the genocide of Native Americans. After a while, people got together and said, 'Well, we've eliminated the Native Americas, and pushed them onto reservations, but we still have these African slaves here and we need to free them.'

So a group of people came about called abolitionists who opposed slavery, and other people fought them. The result, ultimately, was the Civil War. And then after the Civil War was the Reconstruction, and there were people who opposed that. That's how we got domestic terrorist groups and racist laws here in America. And this continued right on down through the centuries until the modern era. And the modern era is what brings us here and now.

Because in the 20th Century, there were two, very important years: 1964 and 1965. In the year 1964, a law was enacted called the Civil Rights Act. The Civil Rights Act of 1964 was followed by the Voting Rights Act of 1965. And then that was followed by the Immigration and Naturalization Act, opening up the doors of America for people from around the world — not just Europeans, but people who were Africans, people who are Arabs, people who are Southern Asians.

As a matter of fact, that 1965 law, and the opening of the doors, is how most of you got here.

So now we who are Muslims, Christians, Jews, Sikhs, Buddhists and people of other faiths in America, we stand in opposition to their opposition. They push back, we fight back. And if the people in power are not careful, they're going to unleash the greatest demonstration of non-violent resistance in American history. Because the people in America are not going to stand for being taken back.

If you remember the last election cycle, the model was 'We're going to take our country back,' which means they want to take it backward. Now, the model is that they're going to 'Make America Great Again' — translation: take it back. But we the American people of all faiths, we're not going to allow them. So we ask almighty God, we ask almighty Allah to guide us. We ask him to manifest his characteristics as the God of Justice, to be on the side of the poor, to be on the side of those who are the victims of injustice, and we gather together today, worshiping as he has commanded us, and we thank almighty Allah for the gathering.

We're going to wrap up this part of our service, and then ask our party to come forward and lead us in prayer. But before we do so, I want to share another verse from the Quran with us as a reminder for some and an instruction for others.

Allah said, in the 30th book of the Quran, 'Corruption has appeared on land and sea, because of what the hands of men has earned. That Allah may give them a taste of some of their deeds in order that perhaps they might turn back from evil.'

Let me conclude by saying that we have an obligation in this day and time, because corruption has become ascendant, rising up over land and sea, and it's not a mystery how that's happened. And so we have an obligation, not so much to be concerned about who's a Democrat, Republican, Independent, but who's taking moral stances for justice.

As our activist, Christian leader, friend and neighbor Dr. William Barber said, and is teaching us at this very moment — a Dr. Martin Luther King of his time — he says when immigration laws signed into play by executive order, the people must ask themselves if this is moral or immoral, not if it's Democratic, Republican or Independent. When we look around us, and we see poor people starving in a land of plenty, and homelessness in a city in which there are more millionaires than any other city in America, we have to ask ourselves, is it moral or immoral?

So those of us in the movement for peace and justice, we understand that we are now in a time of what's called 'intersectionality of justice issues.' What does that mean? Intersectionality of justice issues means that no longer can we afford for the people working on immigration and people working on environment, and the people over there working on reforming the criminal justice system, we can no longer afford for everyone to be separate. Now we have to come together, and band together and unite together and support one another in the common cause of establishing America as a beloved community.

I would imagine that those who have migrated to this country did so because of their dream of a beloved community. You believe that America is a place that's better than wherever you were, or else you'd still be there But it's going to take work.

One last point: We are now in a time in which we must defend the immigrants to our nation, all immigrants, not just Muslim immigrants. We have to stand against injustice for al immigrants. There will be great court battles coming, demonstrations in the street coming. There is going to be more activism in the halls of government coming. Yesterday, we saw a tremendous demonstration of unity here in New York City that we've never seen. I've been in New York since I was 8 years old. And when all of those thousands of Yemeni businesses closed together, that was historic, and that was wonderful, and it's only the beginning.

The next time you see black people who are black Americans marching in the streets declaring 'Black Lives Matter,' remember that these black American ex-slaves, Americans of African decent are not immigrants. We did not come to this country because we made a decision to leave where we were and come here. That's why we're always a thorn in somebody's side. So those of us who are immigrants and those of us who are not immigrants, we have the same responsibility, and that responsibility is to stand for justice.

As the late, great American hero Fannie Lou Hamer said: 'Either everybody is free, or nobody is free.'"