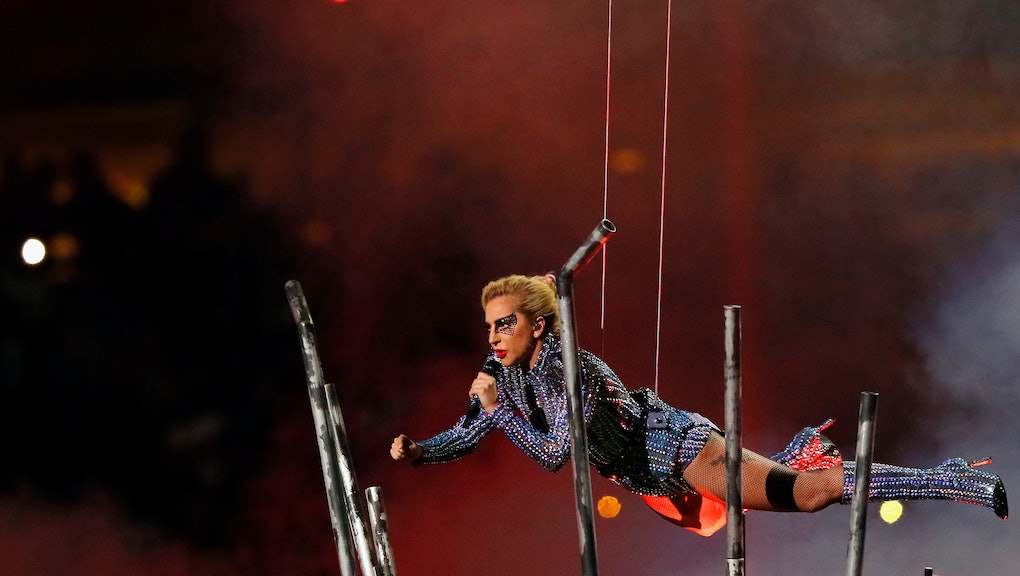 Though Lady Gaga's Super Bowl halftime show featured hundreds of drones, her song list inspired far less awe. With a mix of patriotic tunes and hits, she played it safe. For someone who, in large part, built her career on shock value, that may have been the most shocking move she could've made.

After all, Gaga's politics — especially concerning the 2016 presidential campaign — are clear. As Billboard pointed out, Gaga publicly supported Hillary Clinton and protested outside Trump Tower in November after Donald Trump's surprise win.

There are all kinds of reasons why Gaga may have made the creative choices she did for her performance. We can't know her motivations for sure until (or unless) she releases a statement indicating as much. What we do know, however, is which songs she chose to unleash on the nation.

Here are the songs, in whole or in part, Gaga performed for her Little Monsters — and America — at the 2017 Super Bowl on Sunday in Houston. The night featured a true medley of favorites:

Whether she was going for a serious or ironic tone, Gaga opened with one of the most patriotic songs there is — Irving Berlin's "God Bless America."

Perhaps this song was a nod to the Trump administration, which removed the LGBT page from the White House website shortly after Trump's inauguration.

By not mentioning Trump, Gaga definitely kept her poker face during her halftime performance.

"The Edge of Glory"

Another song from the Born This Way album could've been another subtle hint to the Trump administration — or simply a choice to perform one of her biggest hits.

"This Land Is Your Land"

Yes, another patriotic nod, this one by Woody Guthrie.

The real question about this song choice: How could she perform "Telephone" without Beyoncé?

Gaga harkened back to her early days by performing her hit debut single.

Another hit for the win — her third Billboard hit, to be precise.