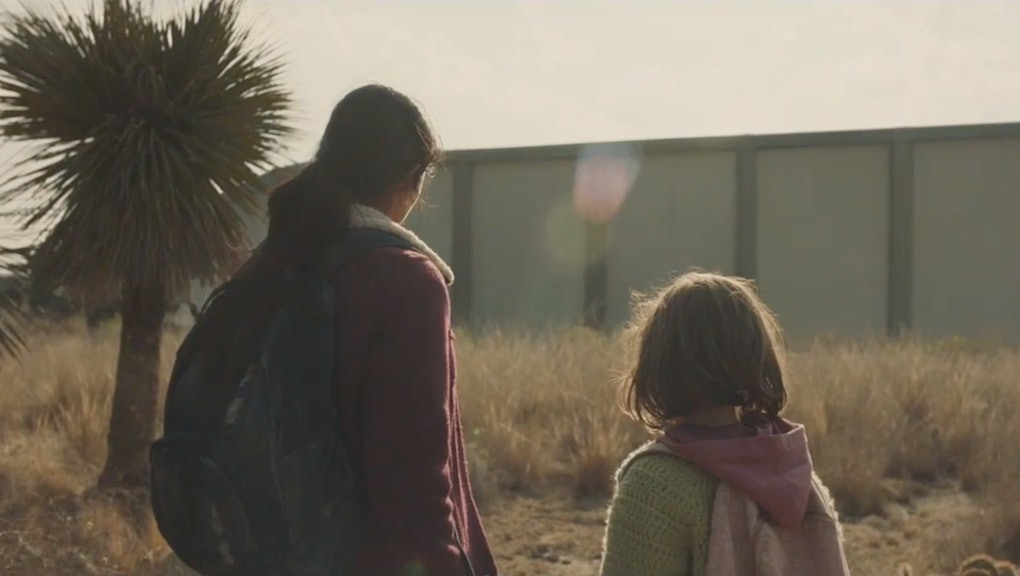 The 2017 Super Bowl ads were marked by a decidedly political tone, as brands such as Coca-Cola and Budweiser boldly took on themes of immigration and inclusiveness in the wake of President Donald Trump's "Muslim ban."

The company's Super Bowl commercial centers on a Mexican mother and daughter who travel through Mexico on their way to the United States. The commercial closes with the pair holding hands as they continue on their journey — but that wasn't how it was initially supposed to end.

The commercial, the company revealed, originally ended with the two arriving at a border wall — much like the one Trump has proposed. Fox, however, deemed the depiction of the wall too controversial to air, according to 84 Lumber.

"... [T]he conversation in the media exploded around this topic, and it evolved into something controversial that made Fox a little too uncomfortable," 84 Lumber Director of Marketing Amy Smiley told the Washington Post.

Ultimately, 84 Lumber was still able to tell the story it wanted to tell. The end of the Super Bowl commercial that aired Sunday directs viewers to head online to "see the conclusion." Entitled "Complete the Journey," the full video follows the mother and daughter as they arrive at the border wall. Though initially dejected, they soon find a door in the wall through which they excitedly enter the United States.

The commercial concludes with a simple message: "The will to succeed is always welcome here."

"Even President Trump has said there should be a big beautiful door in the wall so that people can come into this country legally," 84 Lumber President Maggie Hardy Magerko said in a statement, according to the Wall Street Journal. "It's not about the wall. It's about the door in the wall. If people are willing to work hard and make this country better, that door should be open to them."

The commercial's strong stance in favor of Mexican immigration, however, unsurprisingly stirred up controversy. While some were quick to praise the company's bold message, other conservative viewers attacked the construction company for its political statement.

Others, however, attacked the company for its reportedly pro-Trump and pro-wall views, viewing the commercial not as a takedown of Trump's policies, but rather an argument for legal immigration that works within Trump's system.

In an interview with the New York Times, Magerko revealed she voted for Trump. While she said she was in favor of "certain immigrants," she mentioned her faith in elected officials to "make the decisions to make us safe."

"I am all about those people who are willing to fight and go that extra yard to make a difference and then if they have to, you know, climb higher, go under, do whatever it takes to become a citizen. I am all for that, 110%," Magerko told the Times. "But do I want cartels? Hell, no."

In creating the politically charged commercial, however, the company was prepared for the controversy that would result.

"Ignoring the border wall and the conversation around immigration that's taking place in the media and at every kitchen table in America just didn't seem right," Rob Shapiro, the chief client officer at Brunner — the advertising agency that worked with 84 Lumber on the ad — told the Washington Post.

"If everyone else is trying to avoid controversy, isn't that the time when brands should take a stand for what they believe in?"