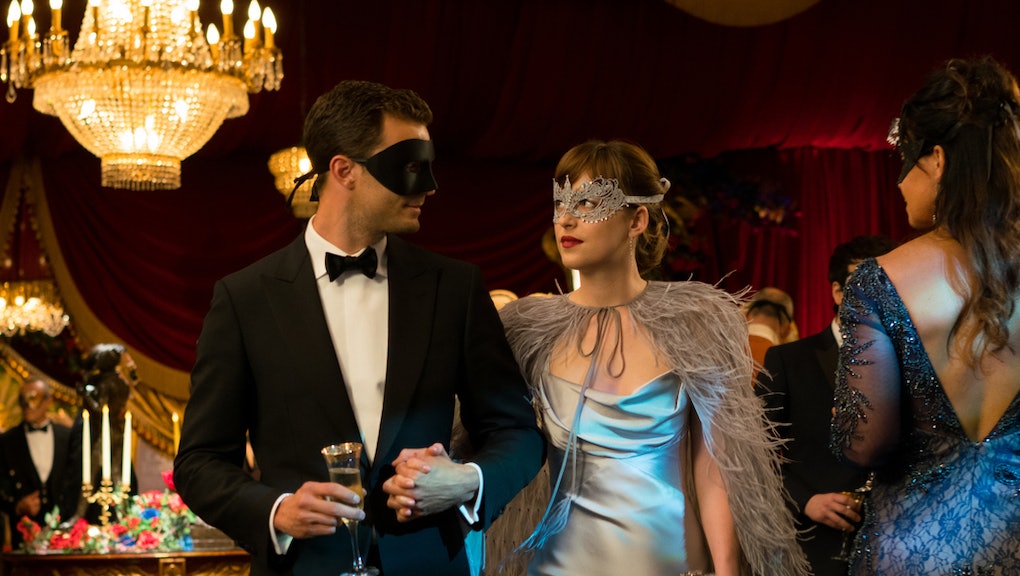 To promote upcoming film Fifty Shades Darker, Suits star Sarah Rafferty filmed two commercials in which she teases an extended scene from the movie that will be broadcast during the show's Wednesday episode, which airs at 10 p.m. Eastern on USA.

Both commercials include seductive shots of Rafferty sitting at a vanity table as she says, "I like things a little ... darker," before promising the extended scene from the Fifty Shades of Grey sequel. The second TV spot hints, "Every relationship includes a little bit of risk."

The sequel to the 2015 film adaptation of bestselling novel Fifty Shades of Grey will open in theaters Feb. 10. It continues the story of the relationship between a young and inexperienced Anastasia Steele, played by Dakota Johnson, and sexually adventurous businessman Christian Grey, played by Jamie Dornan.

The film's official website describes the movie as follows:

When a wounded Christian Grey tries to entice a cautious Anastasia Steele back into his life, she demands a new arrangement before she will give him another chance. As the two begin to build trust and find stability, shadowy figures from Christian's past start to circle them, determined to destroy their hopes for a future together.

Along with Johnson and Dornan, the cast also includes Kim Basinger, Luke Grimes, Eloise Mumford, Eric Johnson, Bella Heathcote and Marcia Gay Harden, among others. Directed by James Foley, the film's screenplay is written by Niall Leonard and is based on the book of the same name by E.L. James.

Fifty Shades of Grey received mostly negative reviews, but its box-office total — the film earned more than $570 million worldwide — demonstrated the public's interest in the franchise. In its first 24 hours of release, Fifty Shades Darker's trailer became the most-viewed trailer ever; the movie is expected to generate sales between $30 million and $42 million during its opening weekend.