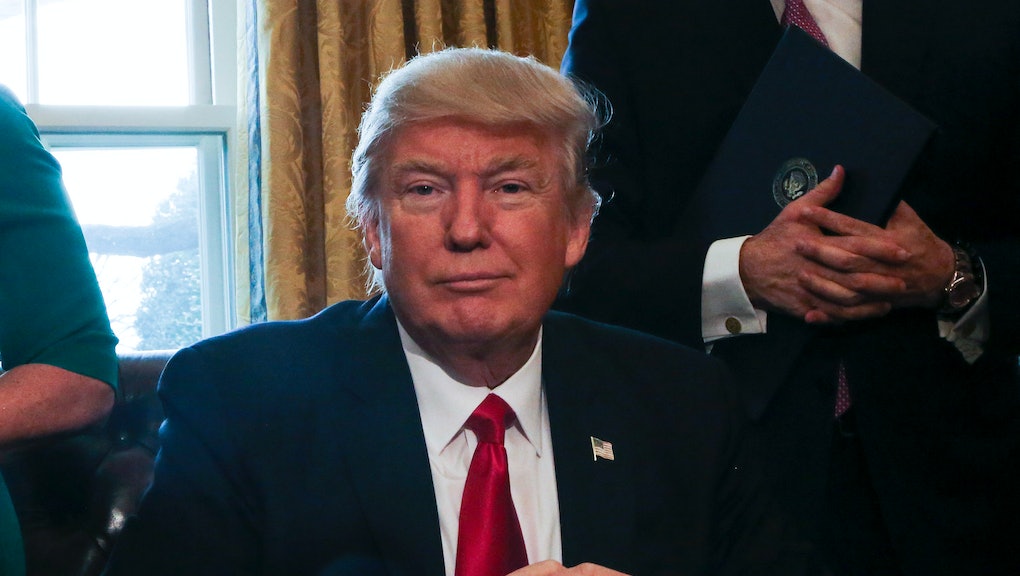 President Donald Trump did something on Monday he's done many times before: He dismissed reports that a majority of Americans disapproved of something he did as "fake news."

This time, Trump was objecting to polls conducted by a number of news outlets that show his controversial plan to build a wall along the U.S.-Mexico border is unpopular with a majority of Americans.

In a subsequent tweet, he added: "I call my own shots, largely based on an accumulation of data, and everyone knows it. Some FAKE NEWS media, in order to marginalize, lies!"

The problem, of course, is the media isn't lying. While it's fair to harbor a healthy skepticism of institutional bias, an August 2016 FiveThirtyEight assessment of major polling firms found that none of the three of the polls Trump name-drops in his tweet — CNN, ABC and NBC — earned an accuracy grade below "A-."

It's not just liberal-minded news networks that use these polls; respected institutions across the ideological spectrum, like the libertarian CATO Institute, frequently cite them as well.

To equate mainstream polling institutions with no history of falsifying results to "fake news" is to flirt with the possibility of destabilizing the public's confidence in the media — the one institution that exists as a built-in fact-check to elected officials. It's a risk Trump seems more than willing to take.

Below are the painstakingly culled instances of Trump declaring verifiable facts to be "fake news" since the Nov. 8 election.

Claim: "I turn on one of the networks, and they show an empty field," Trump said during a speech at the CIA on Jan. 21, the day after his inauguration. "I'm like, wait a minute. I made a speech. I looked out, the field was, it looked like a million, million and a half people."

Reality: Although Trump attempted to disparage the media for downplaying the size of his inauguration crowd, aerial photos taken on the day prove otherwise. Further, according to Vox, a report from the Washington, D.C.-area transit authority claimed only 193,000 rode the metro as of 11 a.m. Jan. 20 — significantly less than the number of riders who turned out when former President Barack Obama was inaugurated (both times).

Claim: During an interview with ABC News' David Muir, Trump repeatedly cited a 2012 report from the Pew Center on the States to buttress his claims of widespread voter fraud in the 2016 presidential election. When Muir claimed the report's author, David Becker, had gone on record to say he had not found any evidence of voter fraud, Trump accused the author of "groveling," the Washington Post reported.

Reality: In a February 2012 interview, Becker listed findings of inaccurate voter registries but nothing about "voter fraud."

"It's all about the voter list. It was not about fraud at all," he said.

Claim: In a tweet, Trump claimed the New York Times' coverage of him had been so inaccurate that the newspaper had "actually apologized" to its "dwindling subscribers and readers."

Reality: In the three months after Trump's election, the Times added 276,000 net digital-only subscribers — more than it had added for the entire year of 2015.

Claim: The media — or the "opposition party," as Trump refers to it — failed to display adequate "outrage" when American jobs were "fleeing the country."

Reality: If media "outrage" is to be interpreted, in this case, as a willingness to report on American job losses, Trump is mistaken. The media, which hold a desire for accuracy and truth in reporting above all else, has reported a great deal on job losses and automation.

Claim: After reports surfaced that Trump had "lashed out" at Australian Prime Minister Malcolm Turnbull — by hanging up him during a diplomatic phone call to discuss a refugee deal after telling him it was " the worst call by far" — the president claimed on Twitter that the media sensationalized the situation.

"Thank you to Prime Minister of Australia for telling the truth about our very civil conversation that FAKE NEWS media lied about," Trump wrote. "Very nice!"

Reality: According to the Guardian, Turnbull did indeed speak to 2SM Radio in Sydney about his call with Trump, but his account was not necessarily a favorable one.

While he denied reports that Trump had hung up on him, he hesitated when asked if Trump had a brash manner.

"I'll leave others to comment on him but he's clearly a very big personality," Turnbull said.