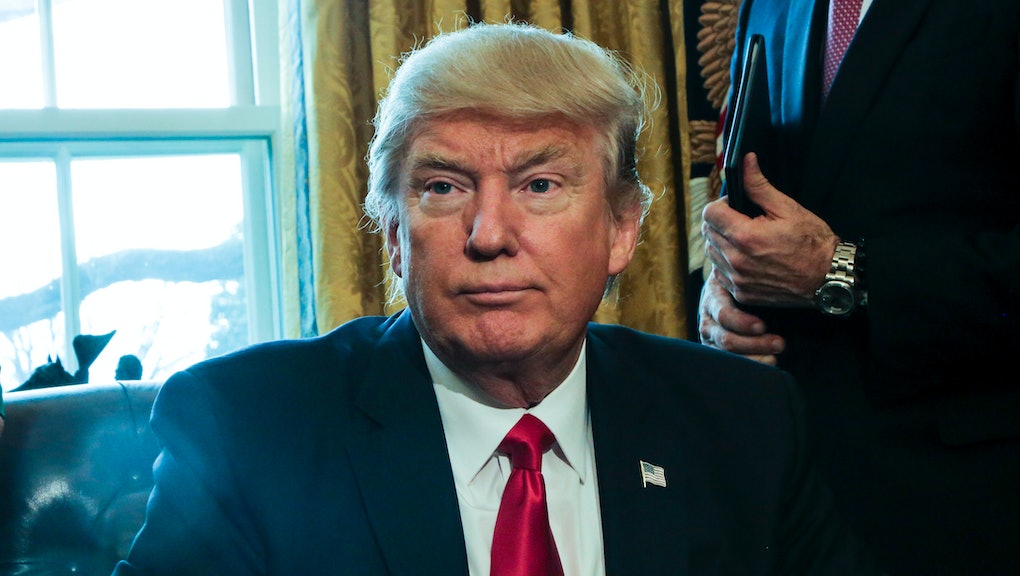 Will Trump repeal Obamacare in 2017? All signs point to no.

Repealing the Affordable Care Act has been at the top of Republicans' wish list ever since Barack Obama signed it into law in March 2010. When Donald Trump won the presidency, ditching the health care policy became a given, with Trump repeatedly promising to repeal and replace his predecessor's eponymous legislation on day one.

But on Monday, day 18 of Trump's presidency, the Affordable Care Act remains on the books. And Trump himself is admitting it will likely stay that way until 2018.

"Yes, in the process and maybe it'll take till sometime into next year but we're certainly going to be in the process," Trump told Fox News host Bill O'Reilly in a Sunday interview.

"You have to remember Obamacare doesn't work so we are putting in a wonderful plan."

If Trump's administration has any idea what this "wonderful plan" entails, they're keeping those cards close to the vest.

In January, Trump seemed to betray a total lack of a plan to replace Obamacare, writing in a tweet that he hoped Republicans and Democrats would collaborate to "come up with a healthcare plan that really works."

Trump's calls for a bipartisan brainstorm suggest his healthcare policy may not even be in the rough draft phase yet. Still, the president promised weeks later that he would repeal and replace the Affordable Care Act "essentially simultaneously."

"It will be various segments, you understand, but will most likely be on the same day or the same week — but probably the same day — could be a same hour," he said during his first press conference as president-elect.

The stalled process has caused some Republicans to lose heart.

"For goodness sake, we should be able to put something on President Trump's desk that's at least as good as what we put on President Obama's desk," Ohio Rep. Jim Jordan told CNN on Monday. "Let's repeal it. Let's do what the voters sent us here to do."

Jordan lamented Republicans' "watered down" approach, perhaps referring to the Senate's Jan. 12 vote approving an Obamacare "repeal resolution." The resolution establishes a budget process that sets the stage for what will, someday, maybe, be a complete repeal of the Affordable Care Act.

North Carolina Rep. Mark Meadows said he thinks Republicans in Congress are making the repeal process more complicated than it needs to be — perhaps it can be as easy as Trump makes it sound.

Meadows told CNN: "We're making the whole idea of repeal and replacement far more complex and laborious than it needs to be and I think it's time that we just make some decisions and move forward."