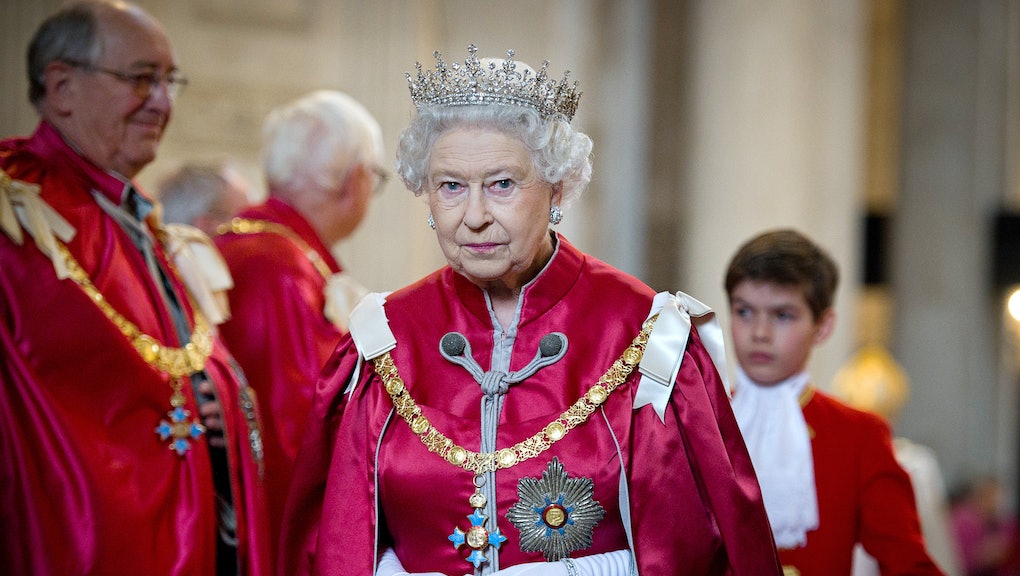 Queen Elizabeth celebrates 65 years on the British throne Monday, making her the only monarch in British history to reach her Sapphire Jubilee. Though other members of the royal family have taken on some of her duties in recent months, the 90-year-old queen still maintains an active public presence.

The queen's anniversary, also known as Accession Day, was marked by bells tolling at Westminster Abbey and ceremonial gun salutes at London's Green Park. Elizabeth II does not have any public events planned for her anniversary; instead, she will spend the day at Sandringham, her country estate in eastern England.

In honor of the queen's 65th anniversary, here are five things you might not have known about her:

According to Vogue, Elizabeth II was first British royal to send an email, which she sent during a demonstration at an army research center in 1976. Today, she has a Twitter account that keeps track of her work — in fact, she wrote her first tweet in October 2014:

And let's not forget: Her photobombing skills are also on point.

2. She owns all of the United Kingdom's swans.

A census of all swans takes place in the United Kingdom — or, as the locals call it, the Swan Upping — during the third week in July. According to the British Monarchy website, "As early as the 12th century, the Crown claimed ownership of all mute swans in the country because the birds were highly valued as a delicacy at banquets and feasts."

The queen has the right to own any unclaimed mute swans in open waters across England and Wales. In fact, one of her titles is "Seigneur of the Swans," according to USA Today.

Spearheaded by Queen Elizabeth II, the Commonwealth of Nations is comprised of 53 independent states that were once British colonies. Of those 53, 16 nations recognize Queen Elizabeth II as their head of state, although they are governed separately.

To celebrate her Golden Jubilee in 2002, the queen hosted a star-studded concert in the Buckingham Palace gardens, also known as "Party at the Palace." An estimated 12,000 people attended a concert that featured Sir Paul McCartney, Bryan Adams, Elton John, Annie Lennox and Phil Collins, to name a few.

And who can forget her performance alongside Daniel Craig's James Bond at the 2012 London Olympics?

This one may not be a big secret, but we had to include it anyway. According to Vanity Fair, Elizabeth II has had pet corgis by her side for even longer than her husband, Prince Phillip, whom she's been married to for 69 years.

"My corgis are family," the queen once said.