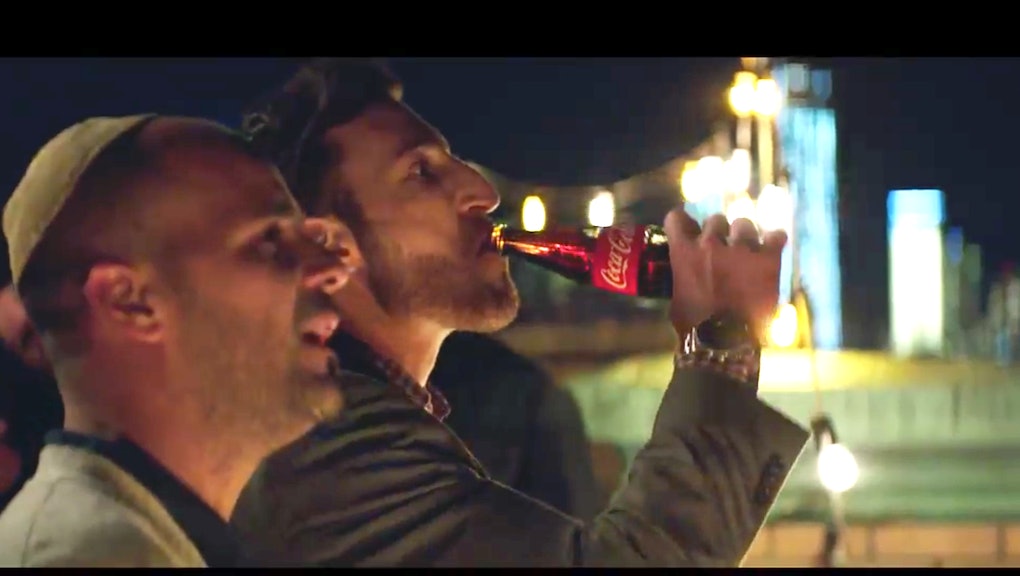 "It's Beautiful," the Coca-Cola Super Bowl ad that features Americans of all backgrounds singing "America the Beautiful" while drinking Coke, debuted at the 2014 game — but at Super Bowl 51, it felt more relevant (and controversial) than ever.

The company re-aired the three-year-old ad during a pregame commercial break Sunday. Like other commercials that aired during the broadcast, "It's Beautiful," created by Wieden + Kennedy, featured members of marginalized groups that have been targets of President Donald Trump's executive orders, including immigrants and Muslims. The ad features people speaking English, but also Arabic and Hindi.

A Coca-Cola spokesperson told Mic the ad's timing was not intended as a political statement. "This ad has been airing on television and cinema broadcast since 2014," the spokesperson said.

But some Americans read it as one. Many on the right were so upset by the message of togetherness that #BoycottCoke spread on Twitter in response — again. (In 2014, protesters used #BoycottCoke and #SpeakAmerican in response.)

On /r/The_Donald, Reddit's clamorous and influential Trump fan forum, users railed against Coca-Cola's "propaganda" and proposed a boycott of the brand in multiple threads.

"So they support the stupid hijab and what it represents," wrote one user. "Fuck them. I don't drink that shitty black battery acid anyway."

Other threads took the rallying cry of nationalism even further. One criticized "Coca-Cola globalism" — a loaded term that can act as a dog-whistle for conspiracy theorists and anti-Semites.

"I realize that Coca-Cola aired this commercial in 2014, but today I feel so much more betrayed by it than I did then," the original post reads. "I do not ever want to hear 'America the Beautiful' sung in the multitude of languages. If those who would come here and become American citizens the right way truly loved America and what she stood for, they would learn the language of the nation."

On 8chan's /pol/ forum, an anarchic refuge for white nationalism and a favored stomping ground of the Trump-loving "alt-right," the message was even more extreme.

People dropped anti-Semitic conspiracies about the soft-drink industry — "You were drinking the Jew all along no matter what brand you pick," read one message — and asked fellow users to "take the waterpill and remove soda," a reference to the mind-opening "red pill" from The Matrix. They vowed to avoid any Coke-owned beverage — and LaCroix, which is not owned by Coca-Cola, but which one person called "flavored Jew water" anyway. Another called Mexicans the "enemy," advising others to not support a company that sympathizes with immigrants.

In response to the backlash, a Coca-Cola representative sent the following to Mic:

The premise of 'It's Beautiful' can be simply stated: America is beautiful and Coca-Cola is for everyone. It celebrates Coca-Cola moments among all Americans and features snapshots of American families. We believe it's a powerful ad that promotes optimism, inclusion and celebrates humanity.