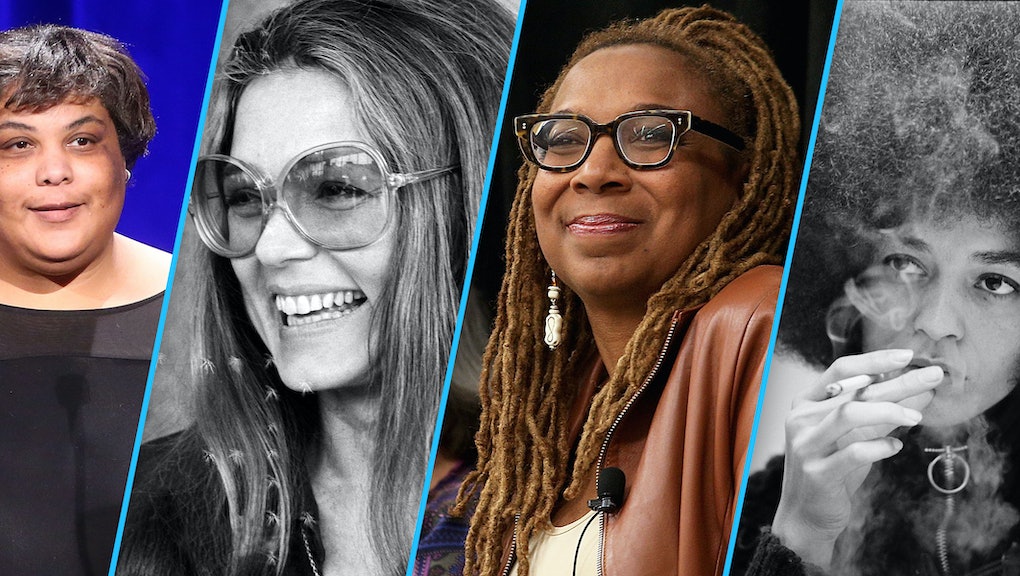 President Donald Trump's victory left many of us feeling devastated, fearful and hopeless. But in the weeks following his inauguration, Americans made it clear that they won't allow these feelings to paralyze them.

Instead, millions of people around the world set the tone for Trump's presidency by mobilizing for women's marches across the country, establishing that the driving force behind what very well may be four years of protest would be feminism.

Considering that Trump's administration is one bent on eliminating women's reproductive freedoms and cutting funding to programs combatting gender-based violence, it certainly makes sense that the fight for women's rights would be at the forefront of protest. But feminism is useful as a model for resistance for many more reasons: because fighting patriarchy means taking down white supremacy, too. And because insisting on gender equality means tackling colonialism, capitalism and every kind of hierarchy of power in the United States that keeps men like Trump at the top, and others at the margins.

It's about fighting against the whole system — and it's a tall order. So allow these feminists to guide you.

"Anger is an appropriate reaction to racist attitudes, as is fury when the actions arising from those attitudes do not change."

Critics of anti-Trump rallies have accused protesters of throwing a "temper tantrum" or dismissed them precisely because of their anger. Lorde reminds us that our anger is not only warranted, but that it's a useful emotion to create change.

"Law and justice are not always the same. When they aren't, destroying the law may be the first step toward changing it."

As Trump continues to wrestle with the State Department and federal judges over the legality of his executive order banning visas from seven Muslim-majority countries, it's clear that laws aren't always just. Steinem challenges us to imagine what equality looks like beyond the country's legal system.

"The connections between and among women are the most feared, the most problematic and the most potentially transforming force on the planet."

If the leaders of the Women's March weren't proof enough, consider the four female judges who led the fight against Trump's Muslim travel ban. When women organize, there's no limit to what they can accomplish.

"Feminist politics aims to end domination, to free us to be who we are — to live lives where we love justice, where we can live in peace. Feminism is for everybody."

Feminism isn't about creating boundaries with "PC culture" or "trigger warnings," as opponents would have you think — it's about carving out space for everyone to be who they are. And a feminist future is a future everyone can be a part of.

Amid protests following Trump's election, many politicians called on Americans to accept the facts: Trump had won the presidency and there was nothing anyone could do to change it. Though that may continue to be the case for the next four years, Davis suggests it's no good reason to stop fighting for change.

"It's not about convincing those who are currently in power, it's about changing the very face of power itself."

Crenshaw, the UCLA law professor and feminist thought leader who invented the term "intersectionality," reminds us that if we are focused solely on changing Trump's mind about his staunch beliefs, we're thinking too small.

"We don’t all have to believe in the same feminism. Feminism can be pluralistic so long as we respect the different feminisms we carry with us, so long as we give enough of a damn to try to minimize the fractures among us."

The biggest critique anyone can level against a movement is to call it "divided." Writer Gay argues that a movement doesn't necessarily need to be united in order for it to be effective. Luckily, there's more than one way to be a feminist — and as long as we recognize that different women live different struggles, you're doing it right.

"Hope locates itself in the premises that we don’t know what will happen and that in the spaciousness of uncertainty is room to act."

Trump has already proven that he's prepared to make good on his most controversial campaign promises. Though that fact is worrisome enough, what keeps many of us up at night is the fear of the unknowable — the fear of what's to come. Solnit, the author of Men Explain Things to Me and Hope in the Dark argues that the unknown presents a golden opportunity: to play offense and create the change we want to see.