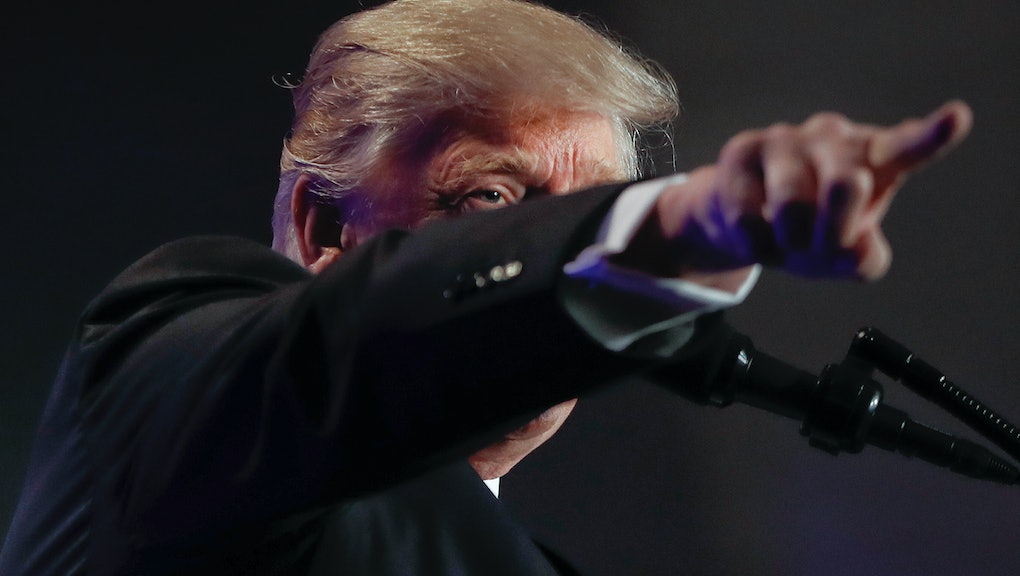 Like Donald Trump, these leaders have also dismissed negative news as "fake news"

President Donald Trump's administration has been ridiculed for characterizing things that are manifestly false as "alternative facts." Meanwhile, the president himself frequently pillories the reputable news organizations that accurately report on him as "fake news."

Though the term originally gained popularity on the left to describe the kinds of fictions or severely misleading "news stories" that were spread to harm Hillary Clinton's presidential campaign, Trump has adopted it in his long war against the press.

During his first news conference as president, Trump refused to take a question from CNN's Jim Acosta, condemning the organization as "fake news." He has said that "any negative polls are fake news." And on Twitter, he has repeatedly raged against "total fiction" written about him by publications like the New York Times.

The "fake news" refrain might belong to Trump, but he's not the first leader to dismiss media reports he doesn't like as lies.

There's a long history of American politicians calling out the press.

Former President Richard Nixon, who resigned after landmark reporting by Bob Woodward and Carl Bernstein for the Washington Post revealed political spying and a cover-up on behalf of the president's re-election campaign, was famously antagonistic toward the press. He banned reporters from the White House, used the comparatively ominous term "media" to refer to press members and created the first White House communications office to help him with "image control" – tactics that have been in use ever since, including by the Obama administration, according to the Atlantic.

In 1969, Vice President Spiro Agnew railed against the "small and unelected elite" that controlled the media in a famous speech criticizing TV news coverage of Nixon.

"As with other American institutions, perhaps it is time that the networks were made more responsive to the views of the nation and more responsible to the people they serve," Agnew said.

But even then, it was not unusual for an American politician to attack the press. The freedom of press has been under threat since at least 1798, when former President John Adams signed the Alien and Sedition Acts into law. In addition to making it easier for the government to deport people and tougher for immigrants to vote, the law – which directly contradicted the First Amendment of the Constitution – also made it illegal to criticize the government. By 1801, the acts had expired and Thomas Jefferson quickly pardoned anyone convicted under them when he assumed the presidency.

Why Trump's contempt for the media is concerning

Attacks on the press and freedom of speech are common feature of dictatorships and other oppressive regimes throughout history.

In Hitler's Nazi Germany, the government eliminated a large number of the country's 4,700 newspapers, took control of many others and enforced strict censorship rules against independent newspapers. Mussolini also shut down the free press and attacked political opponents.

Stifling the media remains a significant component of repressive regimes today; you can see it in places like Erdogan's Turkey and in Putin's Russia.

That makes Trump's relentless – and often false – attacks on the media more than a little concerning. Not only does he lay into the press on a regular basis, calling out specific reporters for "unfair" coverage – he's also said he would "open up" libel laws to make it easier to sue reporters and media organizations.

"We're going to open up those libel laws," Trump said in 2016. "So when the New York Times writes a hit piece which is a total disgrace or when the Washington Post, which is there for other reasons, writes a hit piece, we can sue them and win money instead of having no chance of winning because they're totally protected."

That suggests that Trump — who on Monday suggested the media is covering up terrorist attacks — wants to impose concrete restrictions on the press; Peter Thiel, the tech billionaire who bankrolled a lawsuit that killed Gawker and plunged former editor A.J. Daulerio deep into debt, is an informal adviser to Trump.

Steve Bannon, Trump's chief strategist, has called the media the "opposition party" and said it should "keep its mouth shut," and Trump himself has said that he has a "running war" with the press.

If history is any indication, it's a war all sides should keep close watch on.