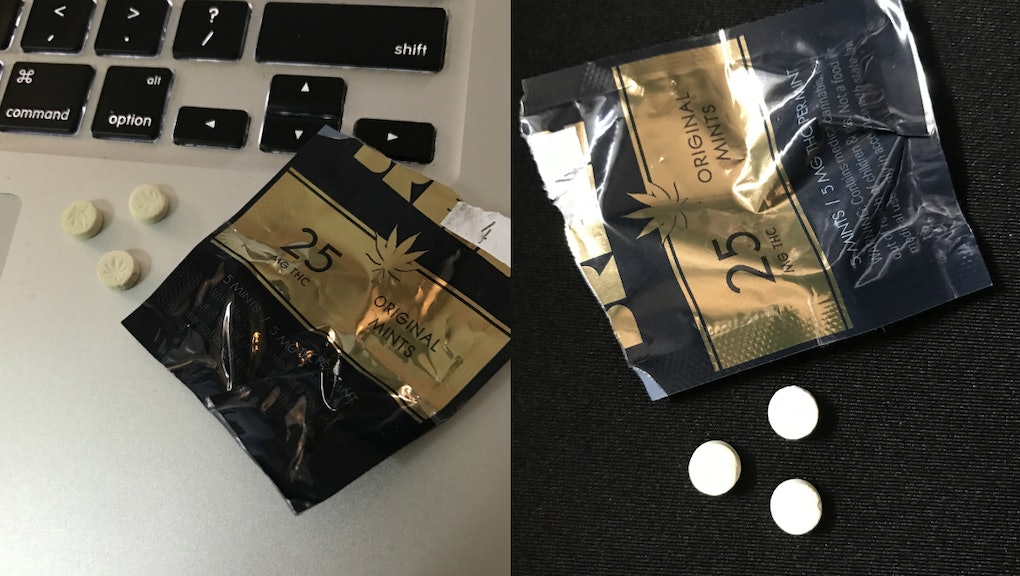 Marijuana mints for microdosing: This common candy makes for a smarter, smoother high

As the marijuana industry explodes into untapped markets, the race is on to deliver increasingly potent new products. But some companies are focused on perfecting the chill pill: a microdose of marijuana in a humble mint.

Weed-infused mints are nothing especially new in the world of edibles: MED•a•mints, marketed as "the original cannabis mints," have been around since 2010, offering vanilla or chai flavors — and 10mg of THC, the psychoactive ingredient in marijuana, per bite.

That's a low-to-average dose for someone who regularly smokes, but digesting instead of inhaling can result in the kind of slow-crescendo body-high that even Willie Nelson considers too intense.

These days, edible manufacturers are looking to scale down the amount of THC in products so that consumers can better control their intake. Breez Original Mints each contain 5mg THC, while Kiva Confections' Petra Mints have just 2.5mg. Mister Moxey's Mints even come in 1mg doses.

Why low doses — and what's microdosing?

Weed culture, at least as depicted in film, TV and music, prizes giant blunts and outrageous bongs. But with marijuana legalization taking hold nationwide, the drive to excess is lessening.

Many who legally partake of cannabis do so for medical reasons and are more concerned with relieving pain, anxiety or insomnia than getting utterly stoned.

Microdosing can be a solution for them, and for anyone who seeks the therapeutic benefits of marijuana but wishes to avoid couch-bound incapacitation. Strictly limiting your THC dosage — or opting for strains and edibles that boast more cannabidiol (CBD), an anti-inflammatory compound in weed that can actually counteract the THC high — means a better degree of control over the whole experience.

But because it's almost impossible to gauge THC intake while smoking or nibbling on a weed-infused chocolate bar, it's useful to have edibles separated into discrete pieces that each contain a set amount of THC. That's where marijuana candies and mints make a difference.

In a word: convenient.

I happened to pick up the smallest package of Breez Original Mints on a whim the other night — $4 for a little foil pouch with five mints with 5mg THC a piece. I didn't think much about where and when I'd try them.

But when my buddy's Super Bowl party wrapped up and a few of us decided to forget the Patriots' nightmarish comeback by going to see the viciously panned horror film Rings, I knew my latest dispensary purchase would come in handy. Like regular mints, you can take these things anywhere, so I popped one in the movie theater lobby instead of lurking with a joint out by the parking garage. A good thing, too, as we were already late to the screening.

Contrary to the wait-and-see metabolizing that edibles experts are used to, mints waste no time in delivering their effects: As Business Insider reports, "most of the THC gets absorbed sublingually, or through the cheeks and under the tongue," meaning you feel the dose in "minutes, not hours."

The upshot was that I detected the slightest buzz right when the title sequence rolled — and knew I wanted a little more. So I fished out a second mint and, just moments later, was enjoying a level, floaty high, perfect for an evening spent laughing at a schlocky sequel. I don't think I even jumped at any of the sudden scares, though that may say more about the movie than the drugs.

Just moments later, I was enjoying a level, floaty high, perfect for an evening spent laughing at a schlocky sequel.

What else are people saying about marijuana mints?

As with any novel weed product, there's a wide range of feelings about marijuana mints. Some users find them ideal for when they can't smoke.

Others like them for a more relaxed air travel experience — and while federal law prohibits the transportation of weed products by plane under any circumstances, a tin of mints is remarkably easy to smuggle aboard.

Sure, you can overdo it. But afterward, you'll know how much you can handle.

And if there's any reliable indicator of the marijuana-mint boom, it's how prominently they're advertised by dispensaries.

If you're wondering what weed can do for you and want an easy, low-stakes way to try it out, mints are the way to go. They provide a great framework for understanding your ideal dose and THC limits, and in a format that requires no smoking paraphernalia, with no inconvenient logistics or embarrassing smells.

Also, unlike many edibles, they actually taste as described. A smooth, subtle high and fresh breath? That's a winning combination.