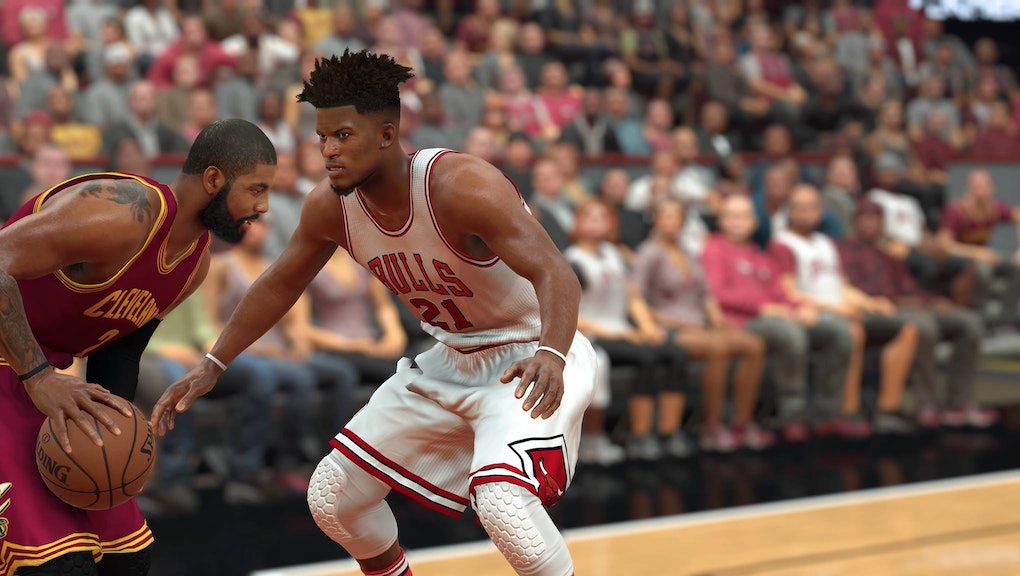 How to play defense in 'NBA 2K17': 5 things you must do to become a lockdown defender

You'll encounter a number of people online who are adept at jacking threes, performing nasty dribble moves and throwing down slams, but most don't play good defense — especially not on the ball.

The following is a list of five rules you must adhere to in order to become a lockdown defender in NBA 2K17.

How to play defense in NBA 2K17: Know your personnel

If you're guarding Steph Curry (pictured above), you have to understand what your opponent wants to do the most, and then take that away.

Curry is one of the greatest long-range shooters in the game. He has a 97 rating in Open Shot Three and Off-Dribble Three.

Curry has the same rating in Contested Three, but that rating is relative. Contested shots go in less frequently. So taking away his space to shoot the jump shot is paramount.

Curry scores well inside the 3-point line too, but you'd be better off forcing him to drive where teammates may be able to help out. If he still makes it, it's better to give up two than three.

On the flip side, if you're guarding Derrick Rose (above), the game plan would be much different. Rose is not a great 3-point shooter but he is still blazing fast.

Most times, he needs to get to the rim to be effective. If you're guarding him, you'd give him more space beyond the 3-point line and force him to beat you with jump shots.

The fact of the matter is: You're going to get beat off the dribble sometimes. Your overall team defense will be better if you have big men capable of rotating over to contest shots in the paint.

This is where the Help Defense and Reaction rating in the game comes into play. Big men with higher ratings in those categories and the Rim Protector badge can help to erase a lot of perimeter mistakes.

How to play defense in NBA 2K17: Stop using turbo

When you lose a step on defense in NBA 2K, a natural tendency is to press speed burst to get back into position to defend. If you're beyond the half-court line, this is acceptable. However, it is not a best practice in half-court situations.

Most times, the area you're covering is so small, pressing the speed bursts disables your ability to make the quick, sliding movements required to stay in front of your man.

Just move the analog stick left and right in close quarters, and do your best to anticipate the moves. That's your best bet to stay close to contest a shot.

How to play defense in NBA 2K17: Limit your attempts at on-ball steals

Picking a ballhandler's pocket is a blast in NBA 2K17, but the same thing that makes you laugh can make you cry.

You should limit your attempts at on-ball steals when defending players with high Ball Control ratings.

More times than not, your attempts are going to be unsuccessful. You'll likely end up putting your player in foul trouble and your opponent on the free-throw line once your team is in the penalty.

How to play defense in NBA 2K17: Don't fall in love with the swat block

Swatting an opponent's shot out of bounds is even cooler than picking their pocket, but this tool must also be used in moderation.

Savvy NBA 2K players will use your cyber aggression against you. The Eurostep move (which is performed by double-tapping the square or X-button without pressing turbo) can throw off a shot blocker's timing.

Once an opponent knows you're trying to send their shots into the third row, they will make an adjustment.

A controlled contest is just as effective when possible. You can press the triangle or Y button (again without the turbo) to provide some resistance. Even if the shot goes up, you will have had some effect on its chances of going in, and decreased the chances of committing a foul or getting out of position.

Are you a sports gamer? Check out more content from Mic, including news on EA Sports' 2017 plans for titles like NBA Live 18 and EA Sports UFC 3. There's also details on R.B.I Baseball 17, and the latest patch notes on WWE 2K17's 1.06 update.