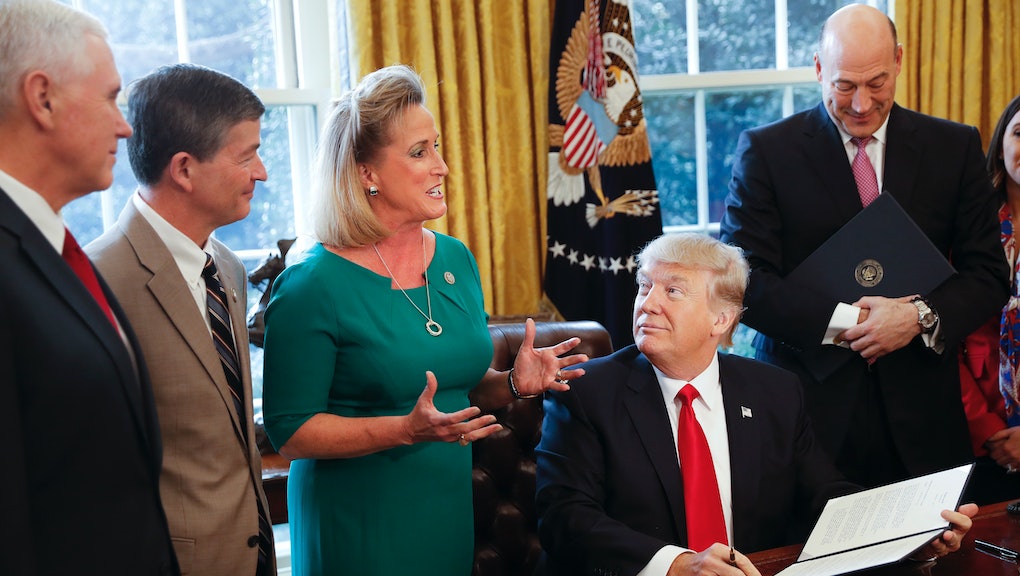 President Donald Trump, citing "friends of mine with nice businesses," signed a memorandum Friday delaying bank regulations put forth by the Obama administration. The laws would have put a stop to certain conflicts of interest by requiring financial advisers to put their clients' interests above their own.

It didn't make a splash in the news the way some of Trump's executive orders have, but the order is still vital — for many, it signals the beginning of an oncoming assault on the protections consumers have against big banks.

Standing by his side while Trump signed the memorandum were two vital Republican collaborators: Missouri Rep. Ann Wagner, who Trump referred to as a "very special person," and Texas Rep. Jeb Hensarling. So where do these two get the bulk of their funding?

Both, it turns out, drink from the same well: the big banks.

For Wagner — who referred to the memorandum as "my baby" — and Hensarling, two of the top three industries that contributed to their campaigns in since 2014 are the same. The first is the securities and investment industry and the other is commercial banking.

The memo was signed along with an executive order that calls on regulators to put the Dodd-Frank Act, a central set of financial regulations, up for review.

"No unaccountable Washington bureaucrats should get in the way of hardworking Americans and their ability to make financial decisions that work best for their families," Hensarling said outside the White House shortly after the memo was signed.

At this point, it is entirely questionable to whom he was referring.