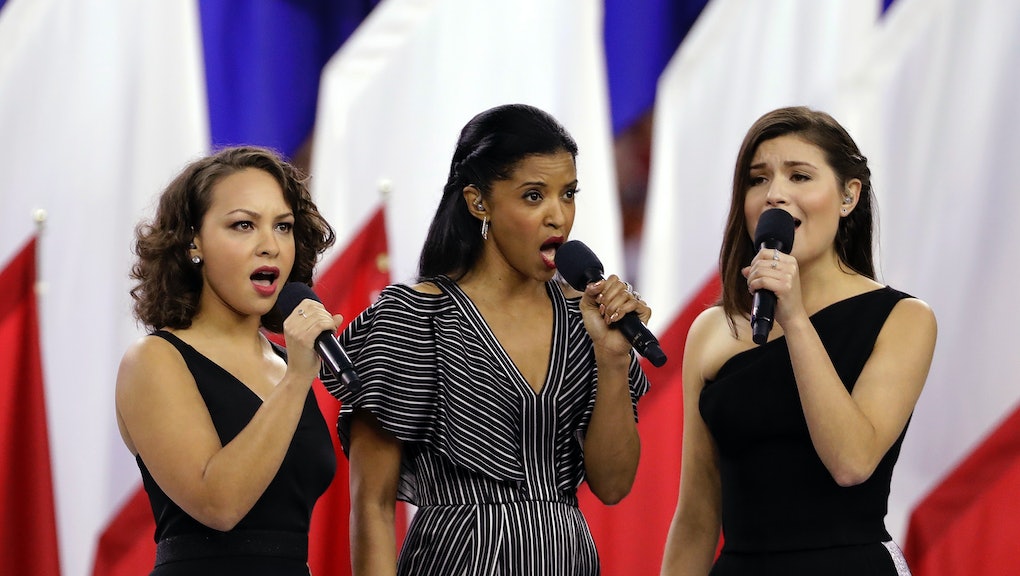 Viewers who tuned into Sunday's Super Bowl may have noticed the addition of two important words to the game's opening song. When Renée Elise Goldsberry, Phillipa Soo and Jasmine Cephas Jones — who originated the roles of Angelica Schuyler, Eliza Hamilton and Peggy Schuyler, respectively, in the Broadway musical Hamilton — sang "America the Beautiful," they added the words "and sisterhood" to the well-known song.

Goldsberry, who won a Tony Award for her performance as the witty and spirited Angelica, told Entertainment Weekly that adding the words "and sisterhood" was the trio's idea.

"One thing that’s been really special being in and representing Hamilton is celebrating women’s role in history, which is sometimes lost," she said. "So we’ve had a lot of practice and help writing that amongst a lot of really talented women and this was another opportunity to do that. And I'm really grateful that it was so well-received and so supported by the NFL."

The importance of sisterhood and the relationships between the three actresses was apparent during Hamilton's original Off-Broadway run at The Public Theater. Goldsberry told Playbill the women became so close while creating the musical that the compositions were altered to represent the bond between them.

"They looked at our song again and realized what had taken form between the three of us didn't really exist musically," Goldsberry said. "They gave us a couple of beats to harmonize with each other to reflect this thing that had taken place — the Schuyler sisters are harmonizing spiritually and vocally with each other."

Hamilton creator Lin-Manuel Miranda was praised for writing the Schuyler sisters as strong personalities — especially Goldsberry's Angelica, who declares in the trio's introductory song that she will instruct Thomas Jefferson to "include women in the sequel" of the Declaration of Independence.

The present-day political relevance of the Tony-winning and record-breaking musical has continued to resonate with audiences. The show made headlines in November after the cast, which has been noted for its racial diversity, addressed Vice President Mike Pence after a performance.