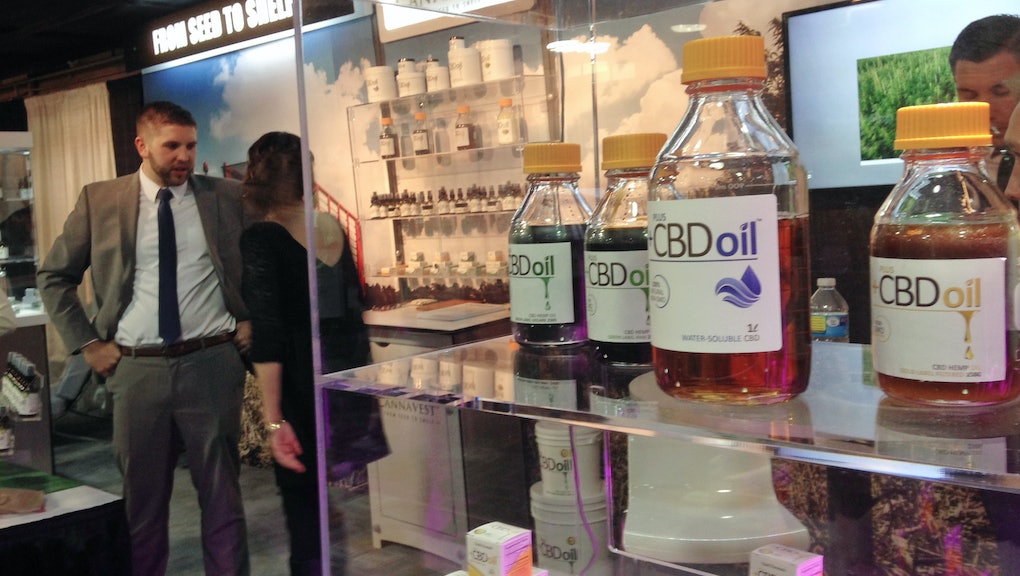 What is CBD oil? This marijuana chemical doesn't get you high — but it's more popular than ever

If you've ever heard weed discussed in chemical terms, you've heard of THC, or tetrahydrocannabinol, marijuana's "main" ingredient — the stuff that gets you high. But lately, as the legal weed market expands, we've seen an increasing focus on a related but very different compound: cannabidiol, or CBD.

Let's take a closer look at this curious molecule.

Like THC, CBD is an active cannabinoid — one of 113 known to be found in marijuana. Cannabinoids are chemical compounds that affect receptors in your body's endocannabinoid system, which is named after the cannabis plant itself. These receptors play a crucial role in everything from our nervous system to immune response to the transmission of impulses through the brain, which explains why weed can have such a profound effect on us.

And like THC, CBD is found in hemp, another cannabis plant. But hemp contains more CBD than THC, whereas marijuana contains more THC than CBD. That's why we tend to use the former to make rope and textiles while cultivating the latter for smoking: CBD isn't very psychoactive, meaning it won't actually get you stoned. Its recreational value isn't immediately clear.

Why do we care about it, then? Because of all the other stuff it can do.

What can CBD do for me?

CBD is a big topic for advocates of medical marijuana, since it appears to be the most therapeutically promising component of weed — and causes none of the heady side effects associated with THC.

Some studies have indicated that CBD may actually counteract THC's negative effects, and although a 2013 report on the question found those conclusions inconsistent, the authors also noted that CBD has no apparent downside:

Few or no adverse effects of CBD have been proffered, and where CBD has been found to have an effect, it is usually in a "positive" (i.e., salubrious) direction. The evidence favoring a beneficial effect of CBD therefore merits further investigation in studies in which the amounts and ratios of CBD and THC correspond to the daily practices of recreational cannabis use.

CBD for pain, anxiety and more

It wasn't until the late 1990s that people began to analyze the specific effects of CBD in earnest, but already we know that it works as a pain reliever and anti-inflammatory agent, a perfect match for diseases like arthritis (or, in the case of Queen Victoria, menstrual cramps). It may serve to treat anxiety disorders. Scientists hold out hope that it could even combat the symptoms and seizures of epilepsy and multiple sclerosis patients.

And that's just the tip of the iceberg. Currently, researchers are exploring how CBD might be of use in cases of everything from post-traumatic stress disorder and insomnia to acne and diabetes. While it's still way too soon to tell how far-ranging CBD's benefits are, the outlook is certainly promising.

How do I take CBD?

In state where marijuana is sold legally, retailers can easily point you to CBD-heavy strains like Cannatonic, Sour Tsunami and ACDC. These still carry THC, of course, whether in trace or significant amounts — so if you want to avoid pot's psychotropic effects, you'll need to watch out for the ratio of THC to CBD. Weed strains with 20 times as much CBD as THC, like ACDC, won't get you high at all, while Pennywise, with a 1:1 ratio, will get you a bit buzzed.

What is CBD oil?

Another way to reap CBD's rewards is with any number of products derived from weed or hemp. These include CBD oil — a pure, concentrated extract made from the flowers, leaves and stalks of either cannabis species — which is taken orally, and can be mixed into food or drink. CBD capsules offer the same product in easy-to-swallow form. Tinctures are similar to oil, though, as the term suggests, more diluted, making them ideal for first-timers. Other kinds of CBD oil can be used in vaporizers, exactly the way e-liquids are.

Beyond that, you also have CBD chewing gum and certain edibles designed to deliver as much CBD as THC. Then there are the CBD topicals, lotions and oils applied directly to the skin, usually to treat a specific spot of pain or inflammation. There are even cannabis sprays and suppositories, like Foria, designed to enhance sexual pleasure by application to the genitals.

Exactly how much of a CBD product you ought to use varies widely depending on method of consumption and what you're using it for, and to some degree it's a matter of trial and error to figure out your dosage. To mitigate the symptoms of epilepsy, a patient may take hundreds of milligrams a day, while someone suffering from anxiety or ADHD may find that 25mg daily is plenty.

This is a tricky question. While the internet is still rife with weed entrepreneurs claiming that CBD extracts are legal in all 50 states, the DEA in December 2016 clarified that CBD oil and similar products are a Schedule I drug, just like marijuana itself. Adding to the confusion is the fact that hemp oil and CBD oil are not the same thing: Hemp oil is made from the seeds and stalk of the plant, not the flower, and contrary to the marketing of some purveyors, you cannot extract CBD from hempseed.

In the wake of the DEA's new rule, lawmakers have sought to make exemptions for CBD, even in states like Wisconsin, where cannabis production remains illegal. So while CBD oils and extracts are currently legal only in states where medical or recreational marijuana is legal as well, we could start to see a few states dip a toe into the regulated weed market by passing legislation to approve the sale or possession of CBD products first.

Either way, expect to hear a lot more about CBD in the weeks and months to come. Its popularity and revelations about its uses are bound to increase as people turned off by weed's most notorious effects discover this alternative way to get high — which is to say, without that whole "high" part.