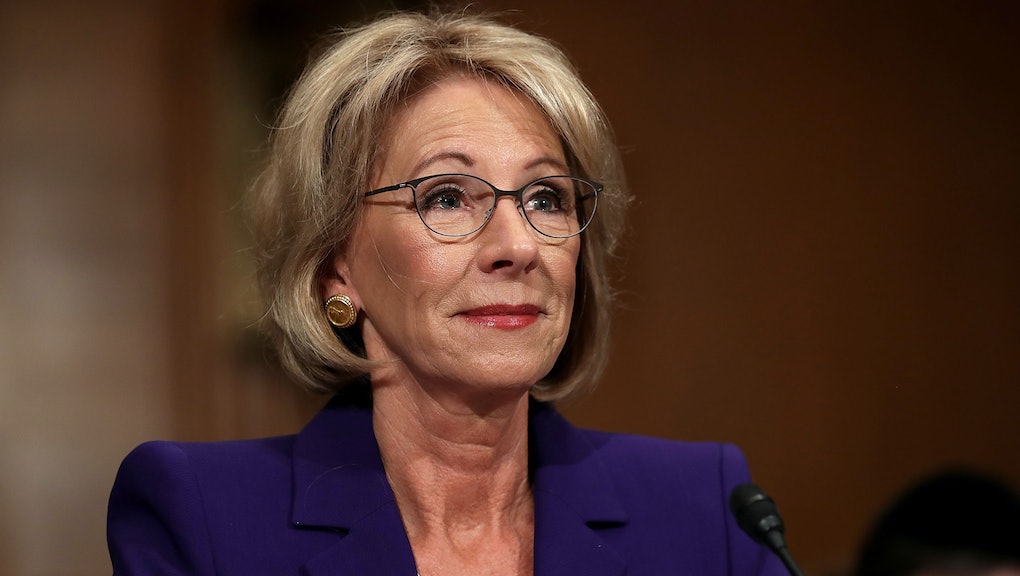 On Tuesday, the Senate confirmed Trump's education secretary pick Betsy DeVos, despite last-minute efforts by Democrats. DeVos' nomination will go down in history for being the first time a vice president voted to split a tie on a cabinet nominee.

In her new role, DeVos will be in charge of several programs that will disproportionately damage the educational and financial futures of the nation's black and Latino students. Here's a look at how some of her educational philosophies may mean big trouble for students of color.

Sen. Elizabeth Warren famously criticized DeVos' lack of experience with student loans as a major reason for her lack of willingness to support the nominee.

"As education secretary, Betsy DeVos would be in charge of running a $1 trillion student loan bank," Warren said. "She has no experience doing that."

Warren added, "If Betsy DeVos can't commit to using the Department of Education's many tools and resources to protect students from fraud, I don't see how she can be the secretary of education."

Failing to address student loan debt would undoubtedly place financial burden on the nation's minority college graduates. Not only are black students more likely to take on student debt, they graduate with more debt. And, the gap between what white students owe and what black students owe grows over time.

Meanwhile, a variety of factors — the high cost of private schools, the lack of Pell Grant money and a move toward merit-based aid — means more Latinos are drowning in variable-interest private loan debt.

During her questioning of DeVos, Warren asked if she had ever had any experience with a federal Pell Grant. DeVos' answer was, of course, no.

"Betsy DeVos has no experience with student loans, Pell Grants, or public education at all," Warren later wrote on her Facebook page.

Pell Grants are completely need-based federal aid that have nothing to do with academics or extracurricular activities. Pell Grants are key in raising the graduation rates of students of color, who may struggle to afford higher education, a recent report stated. According to the study, 35% of low-income black students with a Pell Grant earned a degree compared with 23% who did not. For Latino students, 45% of Pell Grant awardees went on to earn a degree, compared to 25% for those without it.

If there's one issue that DeVos' name is intimately attached to, it's charter schools. According to the Detroit Free Press, DeVos and her family have contributed millions of dollars "to the cause of school choice and unregulated charter expansion throughout Michigan."

Unfortunately, charter schools may spell trouble for the nation's students of color. According to a 2012 report from UCLA, the charter school movement has been a "civil rights failure."

Why does this matter? Integration leads to many net positive outcomes for students, including better academic performance, a better chance at college and better social skills. Conversely, segregation leads to net negative outcomes.

Time will tell if DeVos' nomination is bad or good for the nation's public education system. But, one thing is clear: if it does get worse, students of color will bear the largest burden.