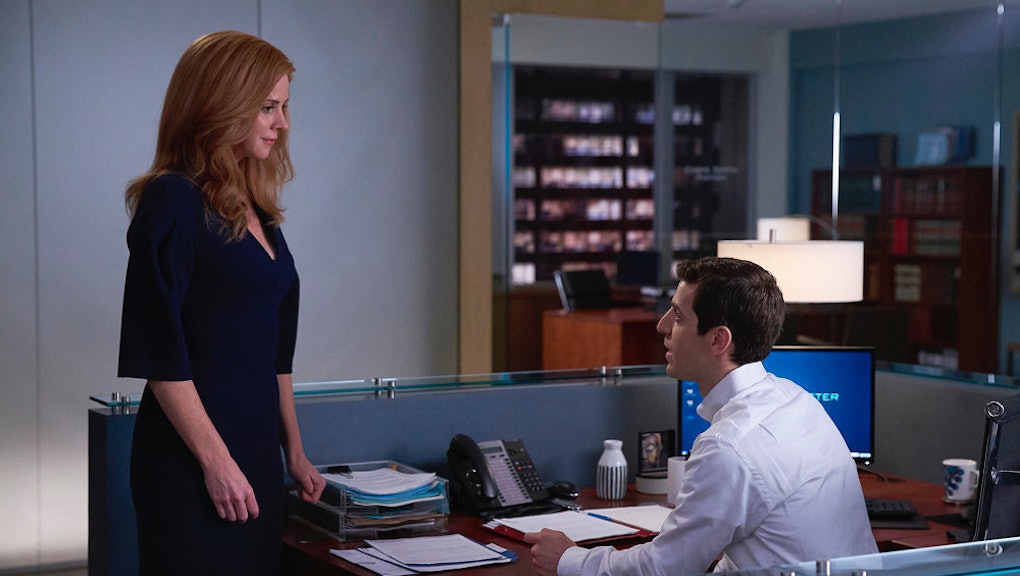 (Editor's Note: Spoilers ahead for season 6, episode 13 of Suits.)

As it turns out, Benjamin (portrayed by David Reale) has been recording Donna for quite some time in hopes of creating a device that could mimic her ability to always say the right things at the right time. Donna is flattered when Benjamin presents the idea to her, especially after she learns its name: "The Donna."

While Donna is initially fond of the device, she soon realizes it only captures a small part of her personality. She tells Benjamin she's more than just sarcastic remarks, and that "The Donna" does not capture her intuition, heart and empathy. Benjamin tells Donna that with her help, he could try to add those elements, so she decides to give the project a chance.

Mic recently spoke with David Reale about his character's arc on Suits, what it's like working with Rafferty and whether the series is set for a science-fiction turn for the worse (it's not).

Mic: Benjamin is going to have a fun story arc with Donna. Can you tell us about this entrepreneurial endeavor?

David Reale: Yeah, I mean, it is funny because you never know what they are cooking up in the writers’ room. I was actually off doing a play and I got this call saying, "Hey, something just got pitched in the writers’ room and they’re just wondering if you are around, 'cause something might be coming up." I was like, "Oh, okay." Because you know, we have seen Benjamin usually once or twice a season, and it is when someone needs something hacked or something is going on. It is not usual to have Benjamin cooking up schemes of his own, so that was very exciting. We find out that he has been [working] on this idea for quite some time before he finally introduces “The Donna” to the real Donna.

What is it like acting alongside Sarah Rafferty, who is just so great as Donna?

DR: Just the best. [In the past] I had one small scene with Sarah, but literally I just came in and was like, "We have a problem." So, it was great [this time] to get to work with her. She is so generous, so funny and so graceful. Yeah, it was like Christmas morning. Pretty awesome.

DR: Donna has the advantage of a writers’ room of people coming up with things for her, but Sarah is no slouch. I have to say that I don't know if it is because I spend so much time as Benjamin adoring and admiring Donna, but it wasn’t hard to do.

Benjamin has taken all these quips and funny remarks from Donna, and while she seems to be having fun with it, after her conversation with Rachel she realizes it does not have enough of her intuition, empathy and heart. Benjamin seems to be on board with fixing that. Has he never seen Westworld? Or any sci-fi movie?

DR: [laughs] You think there is doom in the forecast if he succeeds?

I don't know. Is Suits going to turn into a post-apocalyptic type show?

A funny, sarcastic and sentient artificial intelligence could be quite dangerous ...

DR: What is interesting, though, is that that is such a trope in science-fiction movies that when I was watching Her, I kept waiting for the AI to do something awful. That is the expectation. Sam Harris goes on that we don’t know what the hell AI is going to do. AI is coming. It is just a question of when in the next 50 to 100 years it is coming. For the people who know about these types of things, there is no argument about whether or not it is going to happen, it’s just when and if we are ready.

Will the majority of our science-fiction movies be right? Is it going to be some disaster where they decide that human beings are in the way? Or are insects the most destructive thing that they have to be taken care of? Or is the AI going to be on the side of humanity? I’ll tell you what, if it’s Donna that is at the core of the sentient AI, I think we are going to be in really good shape.

I agree. That would be one of our better options, probably.

We don’t get to see much of Benjamin’s personal life or his motivations. Is “The Donna” just a get-rich scheme for Benjamin, or is there more of a fascination with Donna’s personality?

DR: Definitely the second. I think there is something going on with Benjamin. It is cool getting to see what he wants in the world. And that there is something more for him. But I think he admires Donna so much. In that scene where he says, "Everyone wants to be able to know what to say at the right time, and you know what to say every time"? I think for someone like Benjamin, who has a lot of social anxiety and social awkwardness — and in past episodes he talks about being picked on by the Harvard guys — he sees that Donna can be a real help to a lot of people who feel isolated and lonely and wish they had that friend who has the right words. It is more important than money, for sure.

Is there anything else you’d like to say about your arc or what it's like to be back on Suits?

DR: I was watching some old videos of Elon Musk talking about things he is developing, and the guy is like in tears all the time. There is this idea that these entrepreneurial genius tech workers are somehow emotionally shut down. But I think these people who are doing these incredible things are deeply emotionally invested and that is how they have the strength and the drive [to do what they do].