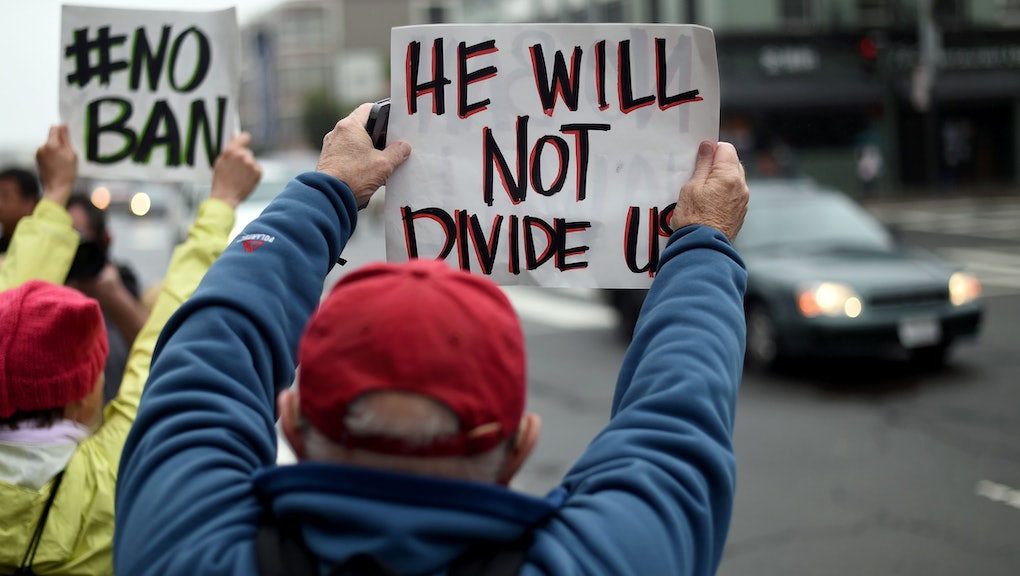 Here are the 3 arguments that could stop Trump's Muslim ban

A district court had put Trump’s order on hold; the federal government had appealed the ruling, arguing that the travel ban should be allowed to go back into effect.

More than 130,000 people listened to the livefeed of the argument. What they heard was a three-judge panel that is very likely to let the decision of Judge James Robart — who was called a “so-called judge” by the president for his troubles — stand. The judges, on balance, appeared frustrated and did not find arguments that the order should go back into effect persuasive.

But of course so many people are interested in this oral argument because of the broader legal questions about the order. After this decision, other courts will have to determine whether the order is legal. There are three major arguments that could be used against the ban.

The first sentence of the First Amendment declares that “Congress shall make no law respecting an establishment of religion.” Exactly what this means is a source of ongoing controversy. Some argue, echoing Thomas Jefferson, that this requires a “wall of separation” between church and state. A more conservative interpretation of the establishment clause holds that it merely requires “nonpreferentialism” — in other words, that it forbids the government from favoring one religion over another but does permit the government to favor religion over irreligion so long as it doesn’t favor any particular sect.

Even under the nonpreferentialist theory — which is more conservative than current court doctrine — Trump’s travel ban raises very serious questions. As Washington Solicitor General Noah Purcell observed during the oral arguments, the “rather shocking” statements of Trump and his advisors calling for a “Muslim ban” make it fairly clear that the travel ban was “intended to favor some religious groups over others.” And as Mark Joseph Stern of Slate points out, the fact that the order, targeted at seven majority-Muslim countries, allows for refugee claims based on religious persecution only if they belong to a minority religion in their home countries gives away the show.

If the courts find the order unconstitutional, it is most likely to do so on establishment clause grounds. It is black-letter law that favoring one religion over another is unconstitutional, and the evidence that this law is motivated by outright animus against Muslims is strong.

The 14th Amendment forbids states from denying any person “the equal protection of the laws.” The Supreme Court has long held that the due process clause of the 5th Amendment places the same requirement on the federal government. Given the strong evidence that this travel ban was targeted at a minority group — namely, Muslims — intuitively this may seem like the strongest basis for a challenge.

However, an equal protection argument will be an uphill climb because of the so-called “plenary power” doctrine. The Supreme Court has held that the authority to exclude foreign citizens is central to national sovereignty, and hence Congress and the executive branch may have the discretion to make distinctions that would otherwise run afoul of the 5th Amendment.

This is not to say that the argument is necessarily hopeless. The plenary power doctrine is something of an anomaly within U.S. constitutionalism, and some recent decisions have undermined it to some extent. Still, lower courts are generally reluctant to push the envelope too far, and so they may be more likely to recognize the two other potential arguments against the order.

Violation of the Immigration and Nationality Act

When evaluating the legality of an executive action, courts will generally first determine whether the action was authorized by statute before considering whether the action was unconstitutional. Trump’s claim of the broad authority to exclude immigrants and refugees is based on the Immigration and Nationality Act. But that statute also stipulates that “no person shall receive any preference or priority or be discriminated against in the issuance of an immigrant visa because of the person’s race, sex, nationality, place of birth, or place of residence.”

As CATO's David Bier puts it, “Trump’s new policy would run afoul of at least one if not all three of those last three restrictions — nationality, place of birth, or place of residence.” And if Trump’s order violates the statute, this avoids the problem of plenary powers doctrine. Even if the courts continue to be reluctant to apply equal protection and establishment clause claims in immigration cases, Congress is permitted to provide greater restrictions on executive action than the Constitution requires.

It is too early to say with any certainty how the 9th Circuit and the Supreme Court will resolve these claims. But it is very likely that the travel order will be prevented from going into effect immediately because the legal arguments against it are very strong.