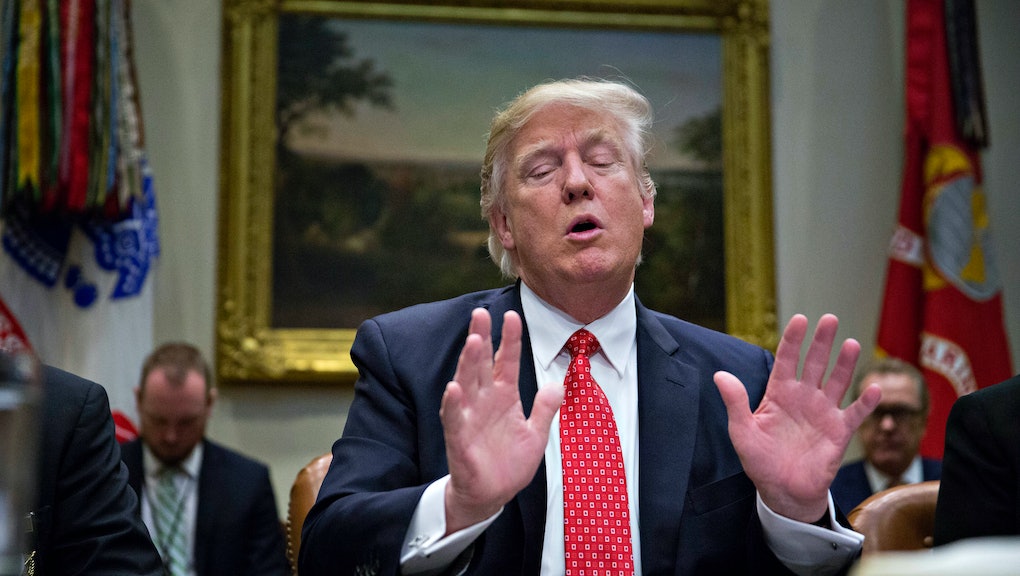 Can Trump be impeached? How the president is testing the limits of what's constitutional.

Even before taking the oath of office, Donald Trump's presidency was plagued by speculation over his impeachment. There are articles discussing his impeachment dating back to April 2016, and Google searches for "impeachment" spiked following Trump's election in November.

Now that he's in the White House, these impeachment cries have only intensified. Four in 10 voters want Trump to be impeached, a poll conducted by Public Policy Polling found, and a petition calling for Trump's impeachment has garnered over 780,000 signatures. Gambling sites are now offering two-to-one odds that Trump will be impeached.

In the House of Representatives, where the impeachment process would take place, California Rep. Maxine Waters has already raised the possibility of impeachment.

"I have not called for the impeachment yet, he's doing it himself," Waters said at a press conference, Time reported. "I think he is leading himself into that kind of position where people are beginning to ask, 'What are we going to do?'"

Article II of the U.S. Constitution stipulates that a president may be removed from office if he is impeached and convicted of "treason, bribery, or other high crimes and misdemeanors."

Can Trump be impeached under this definition? Maybe. While there are already grounds for his impeachment now, it partially depends on what comes next — and what Republicans in Congress are willing to do about it.

The biggest charge in the impeachment case against Trump right now is his business and the conflicts of interest it causes. Trump is accused of violating the foreign emoluments clause, which states that "no person holding any office of profit or trust under them, shall, without the consent of the Congress, accept of any present, emolument, office or title, of any kind whatever, from any king, prince or foreign state."

Though Trump handed over his business to his sons before his inauguration, he did not divest from his business empire, meaning he still benefits financially from it. Documents obtained by ProPublica following Trump's inauguration revealed that Trump is still tied to his business through a revocable trust registered under his social security number.

Some of Trump's foreign business ties that could violate the clause include the fact that the state-owned Industrial & Commercial Bank of China was the largest tenant in Trump Tower as of 2012, and an office building for which Trump is part-owner has also been lent money by the Bank of China.

In response to Trump's foreign interests, a team of constitutional law scholars and ethics experts filed a lawsuit protesting Trump's violation of the foreign emoluments clause.

"The Constitution is explicit that the President cannot profit from a foreign government without congressional approval and there is no doubt that President Trump has been violating the Constitution since he took the oath of office," Erwin Chemerinsky, a constitutional law scholar and dean of the University of California, Irvine School of Law, said in a statement.

Though Trump's foreign entanglements have been the most heavily scrutinized, he may also be violating the domestic emoluments clause, which states that a president may not receive "any other Emolument from the United States, or any of them" on top of his specified salary.

In an article for the Huffington Post, Brianne Gorod, chief counsel for the Constitutional Accountability Center, argued that Trump may be in violation of the clause because of the myriad tax breaks he's received on his various construction projects, as well as any tax breaks for his television show Celebrity Apprentice.

The announcement that the Department of Defense is reportedly seeking to rent space in Trump Tower may also present a problem under the domestic emoluments clause. Norm Eisen, a former ethics lawyer for President Barack Obama and one of the litigators on the foreign emoluments lawsuit, noted on Twitter that the volume of this transaction could violate the clause.

In addition to these current potential infractions, there are still other possible constitutional violations for Trump that could soon arise. Ties between Trump and Russia could be revealed that suggest potential treason, for instance, or other conflicts of interest or examples of wrongdoing could be exposed by the over 75 open lawsuits the president currently faces.

An analysis undertaken by the ACLU prior to Trump's election of the policies he campaigned on, including mass deportations and surveilling American Muslims, revealed that enacting these policies would violate multiple constitutional amendments.

Most immediately, Trump's relationship with the Constitution will depend on what happens next regarding his "Muslim ban." In addition to potentially being unconstitutional in itself, should Trump decide to openly defy the judicial system and the "so-called judge" that ruled against his executive order, he could be found in contempt of court.

"[Contempt of court], in my opinion, is a 'high crime or misdemeanor' in the meaning of the Constitution, and he would be subject to impeachment," Georgia State University professor Daniel Franklin told the Washington Post.

All of this is to say: Trump is currently pushing the limits of the U.S. Constitution.

Previously, only two presidents have ever been impeached, Presidents Andrew Johnson and Bill Clinton — though Richard Nixon resigned before the House of Representatives could officially vote to impeach him.

Will Trump be next? The grounds for it certainly exist — perhaps even more so than with past presidents.

"I don't think Richard Nixon even comes close to the level of corruption we already know about Trump," Nixon's former lawyer, John Dean, told the Atlantic.

The difference between Trump and these past presidents, however, are the Congresses with the power to stop them. Presidents can only be impeached and removed from office by a majority vote in the House and two-thirds majority in the Senate.

Presidents Johnson, Nixon and Clinton, an article in the Week pointed out, all faced impeachment charges by a Congress controlled by the opposing party. Trump, on the other hand, has a Republican-controlled House and Senate at his disposal, who are less likely to want him out of office.

Additionally, the impeachment process also involves a majority vote from the House Judiciary Committee, which is currently comprised of 24 Republicans and just 17 Democrats.

Of course, Trump could do something catastrophic that would inspire Republicans to vote against him, particularly considering his successor would be the more establishment-friendly — and heavily conservative — Vice President Mike Pence.

As reports of Trump's mental instability continue to arise, Pence and Trump's administration also have the option of immediately removing him from office through the 25th Amendment, which states the vice president may become acting president if "the President is unable to discharge the powers and duties of his office."

Until that happens, however, Democrats just have one way to help spur impeachment hearings against Trump: voting in 2018.