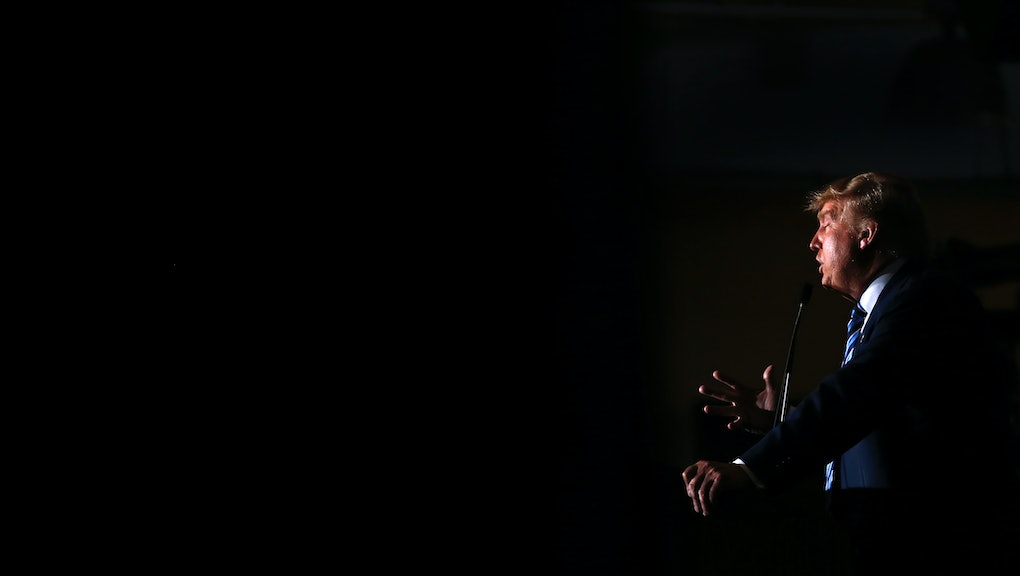 President Donald Trump is expected to sign an executive order that could clamp down on mosques, Islamic charities and Muslim civil rights groups.

The anticipated order would designate the Muslim Brotherhood — a transnational political Islamist group — as a foreign terrorist organization, a former senior Obama official, who asked to remain anonymous for fear of harassment by the far right, told Mic.

Another source with close ties to the Department of Homeland Security, who asked to remain anonymous to preserve those relationships, said there have been contradicting reports of when the order is expected to be signed.

State Department officials and DHS are objecting to the designation, the New York Times reported. However, several Muslim-American organizations were told the order is imminent and is expected to be signed some time next week.

The Muslim Brotherhood, established in 1928 in Egypt, is an Islamist organization — meaning it sees Islam as a political system — with a number of independent branches, political parties and related social initiatives. The Brotherhood, as an ideological movement, has repeatedly denounced violence and encouraged civil engagement, but at times various factions have been accused of engaging in violence.

Robert McCaw, director of government affairs for the Council of American-Islamic Relations, said in an email that designating the Muslim Brotherhood as a terrorist organization is the Trump administration's strategy to carry out McCarthyesque witch hunts on Muslim leaders and organizations within the United States.

“In pushing this designation, Islamophobic hate groups and their congressional allies are seeking to create a new era of witch hunts and religious McCarthyism where being an American Muslim and political detractor is enough to disqualify you from civic participation,” McCaw said.

A long list of prominent American anti-Muslim activists have pushed the notion that American-Muslim groups are merely stealth extensions of the Muslim Brotherhood. Polemicists like Brigitte Gabriel of ACT! for America, where Trump’s national security adviser Gen. Michael Flynn served as a board member, has accused Muslim civil rights groups like CAIR of having ties with the Muslim Brotherhood.

If — or when, some fear — Trump's order is signed, a simple claim that any organization has ties with the Muslim Brotherhood could cast suspicion and a chill over that group because of the severity of the terror designation.

“It’s like the McCarthy era all over again,” Hoda Hawa, policy director for the Muslim Public Affairs Council, said in a phone interview. “The simple whisper of communism casted a shadow over leaders and organizations, and this is exactly what this executive order is expected to do to Muslim organizations."

In addition to CAIR, the Islamic Society of North American and the North American Islamic Trust have been accused of association with the Muslim Brotherhood. ISNA and NAIT are nonprofit organizations and charities providing fundings to groups like the Muslim Students Associations and mosques across the country. This means that Muslim students in the U.S. could also be implicated under the order.

Like many conspiracy theories, the tales of a grand Muslim Brotherhood network in the U.S. are spun around a kernel of fact. In this case, it was the controversial Holy Land Foundation case, where officials of the Muslim charity were convicted in 2008 of material support for terrorism after they funneled money to a Palestinian Brotherhood spinoff that had turned violent. Through what one defense attorney called a "garbage" compilation of documents, CAIR and other groups became entangled in the investigation. CAIR denies any links to terrorism and points out that none of the individuals implicated were CAIR employees or officers.

Three years later, in January 2017, Sen. Ted Cruz (R-Texas) reintroduced the Muslim Brotherhood Terrorist Designation Act with Rep. Mario Diaz-Balart (R-Fla.). The bill asks the State Department to designate the Muslim Brotherhood as a "foreign terrorist organization" — the official U.S. government designation that imposes anti-terror sanctions and restrictions. The bill was referred to the Senate Committee on Foreign Relations, where it awaits further action. (Cruz's office did not respond to requests for comment.)

Several Muslim-American organizations said congressional staffers, mainly in the Senate, believe the lack of motion on the bill is due to the Trump administration's plan to sign an order along the same lines.

Several liberal institutions, like the New York Times' editorial board and Human Rights Watch, are preemptively pushing back against the expected Trump administration order.

Hawa, of the Muslim Public Affairs Council, expressed concerns that in addition to casting a wide net of suspicion on Muslim Americans, the order could set a pretext to suppress Muslim leaders and organizations challenging the Trump administration's violations of civil rights and liberties.

"The executive order allows for any person or leader defending our civil rights and liberties to be reprimanded either through investigation or a raid of an organization," Hawa added.

Rafia Zakaria, a human rights lawyers, said the chill cast over Muslim groups and leaders could violate their right to free speech. In an email, Zakaria said the expected order will establish a pretense to incriminate any Muslim associated with, or engaged in, Muslim civil rights activities.

"My fear behind this is it's part of a concerted strategy to tighten the noose around all Muslims, such that there will be one or another criterion to treat them as suspect," Zakaria said. "The larger logic is to cast a wide net of collective blame as possible using scraps of information and inflating them into evidence of terrorist activity."

"My fear behind this is it’s part of a concerted strategy to tighten the noose around all Muslims."

Zakaria said the Bush and Obama administrations laid the groundwork for this, particularly with the implementation of the Patriot Act and the renewing of its powers, which resulted in dangerously broad interpretations of what constitutes as providing "material support" to a terrorist organization.

"The order fails to address the overly broad interpretations of the material support statue," Zakaria added, referring to section 2339 of the Patriot Act. "The goal the alt-right will achieve is to make all Muslims terrorists — not through insinuation but actually label them as such."

The order will have serious and dire ramifications for the Muslim-American community. Hawa believes the ulterior motive of targeting Muslims domestically is a product of the multimillion-dollar Islamophobia industry

"Many talking points from right-wing Islamophobes are based on conspiracy theories from a well-funded Islamophobia industry and their manipulation of what is happening on the ground," Hawa said. "It has obviously nothing to do with facts or basis in reality. I don't think the Trump administration could care less about the Muslim Brotherhood, since its real target is the Muslim community in the U.S."

Trump’s inner circle has pushed many of these conspiracy theories.

Numerous anti-Muslim conspiracy theorists like Frank Gaffney, reportedly Trump’s foreign policy adviser, have frequently made claims that members of the Muslim Brotherhood are infiltrating the federal government. On Nov. 9, Gaffney encouraged Trump to designate the Muslim Brotherhood as a terrorist organization during an interview with Breitbart.

The anonymous former Obama official Mic spoke to believes Steve Bannon, Trump's chief strategist, is the nexus of the push to designate the Brotherhood as a terrorist group. According to the Washington Post, Bannon proposed making a film in 2007 claiming the U.S. would turn into the “Islamic States of America,” and labeled the Brotherhood as a "the foundation of modern terrorism," despite the group's repeated condemnation of violence.

Bannon has reportedly used Breitbart, where he served as executive chair, to push baseless accusations that former Secretary of State Hillary Clinton and her top aide Huma Abedin are "secretly connected" with the Brotherhood. Bannon also tried to tie Khizr Khan, a Muslim father of a fallen soldier, to the organization during a radio interview.

Hawa believes the strategy behind the Trump administration's reported plan to sign the order is to strip away public support for the Muslim community — ultimately preventing it from defending itself in an era where anti-Muslim policies are the norm.

"What is chilling about the executive order is that it makes people in our civil society feel less inclined and less willing to support these Muslim-American organizations," Hawa added. "And these organizations exist to ensure that the rights and liberties of Muslims are protected, and that they are seen as a part of the American community."

"We cannot be afraid of the thought of being a part of something that is on this list."

Mirriam Seddiq, a criminal defense attorney who is also Muslim, agrees. More importantly, Seddiq said in an interview, it's imperative for Muslims in the U.S. to prepare to resist the order.

"We cannot be afraid of the thought of being a part of something that is on this list," Seddiq said in an interview.

"If we stop joining MSA" — the Muslim Students' Association — "or donating to CAIR, the Karamah foundation will be next," she added, referring to Karamah Muslim Women Lawyers for Human Rights, a nonprofit advocacy group.

She fears that, after an initial sweep, even the most mainstream and popular Muslim leaders will face persecution. "Then our Linda Sarsours and Debbie Almontasers will be next," Seddiq said, naming two prominent female Muslim activists. "Our Martin Luther King Jr.'s will be arrested, and our NAACPs will be dismantled."