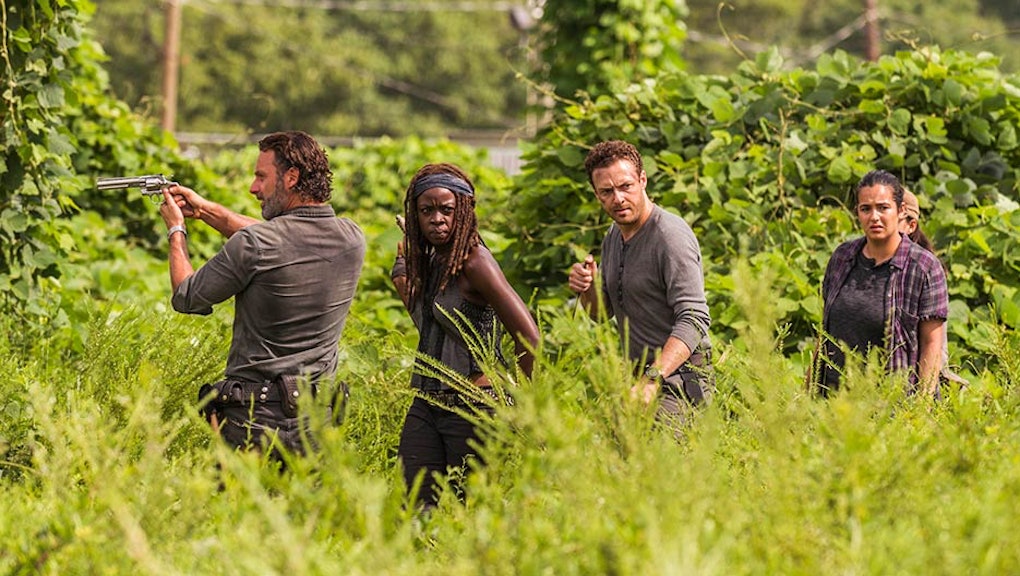 The Walking Dead promised new survivors in the second half of season seven, and the midseason premiere has already delivered on it. The question is: Are these new characters going to be friend or foe?

At the end of the midseason premiere, "Rock on the Road," Rick and members of Alexandria go searching for Father Gabriel, who took the remainder of their limited supplies and drove off into the night. He left a message in his notebook intimating that he could to be at the boat where Rick and Aaron foraged for supplies. But while looking for him, the group is quickly surrounded by new characters, holding weapons, and Rick lets out a somewhat mischievous smile (showrunner Scott Gimple promised Rick would smile, and technically delivered).

Who are they? That's what fans will be wondering for the next week, but in the meantime, we've got four theories.

It's easy to forget, but The Walking Dead show is different from The Walking Dead comics, though they haven't diverted from the comics in a while. If AMC wants, they can create new characters — like fan-favorites Daryl and Sasha — and there's nothing that suggests they shouldn't be able to do the same with a community.

This could be the show's way to demonstrate how groups outside of Negan's control are thriving, assuming we've already met all the other communities indebted to the Saviors. Again, we don't know if this new group is supposed to be allies, but they're certainly new.

These are, for some reason, the Whisperers.

AMC has brought this upon themselves, after teasing the appearance of the Whisperers in the show with a cryptic Instagram post ahead of the season seven premiere. Since then, fans haven't been lent any more clues as to their whereabouts. Nevertheless, we've persisted.

What if this new group happens to be the Whisperers, but they, for some reason, unanimously decided they wouldn't don their signature getup of zombie skin. Alternatively, this could be the Whisperer group before they became adept at hiding in plain sight.

OK, so it's probably not the Whisperers.

Viewers got a glimpse of the Oceanside community in a Tara-standalone episode that, at the time, felt pointless. She escaped on the promise that she'd never tell Alexandria that Oceanside existed because they wanted to stay off of Negan's radar, so it'd be quite awful of Tara to break that promise.

Well, it'd be easier to do so if Oceanside was the group that just surrounded everyone. Plus, Rick would love to have them as an ally considering their impressive cache of weapons and fighting prowess. But alas, it's very unlikely this group is Oceanside. Why? There were men.

Oceanside's previous tussles with the Saviors led to Negan killing all of their men over the age of 10, which essentially turned them into the zombie apocalypse version of Themyscira. There were a fair amount of grown men surrounding Rick and co., so unless they quickly became allies with an all-male community, we're going to say no.

OK, so they're still new, and Father Gabriel is with them.

Let's assume once more this is an entirely new group. What if the reason Rick was smiling when he saw them — and it's not because Rick has totally lost his mind — is because Father Gabriel was among them.

If Gabriel knew about this group (for reasons the show would need to explain), he could've taken the supplies from Alexandria as a peace offering. Knowing they needed more allies against Negan, this would be a refreshingly selfless act from Gabriel — a stark contrast to the alternative in which he ran away and took a lot of shit with him.

In any case, we should know more about this mysterious new group come next Sunday.