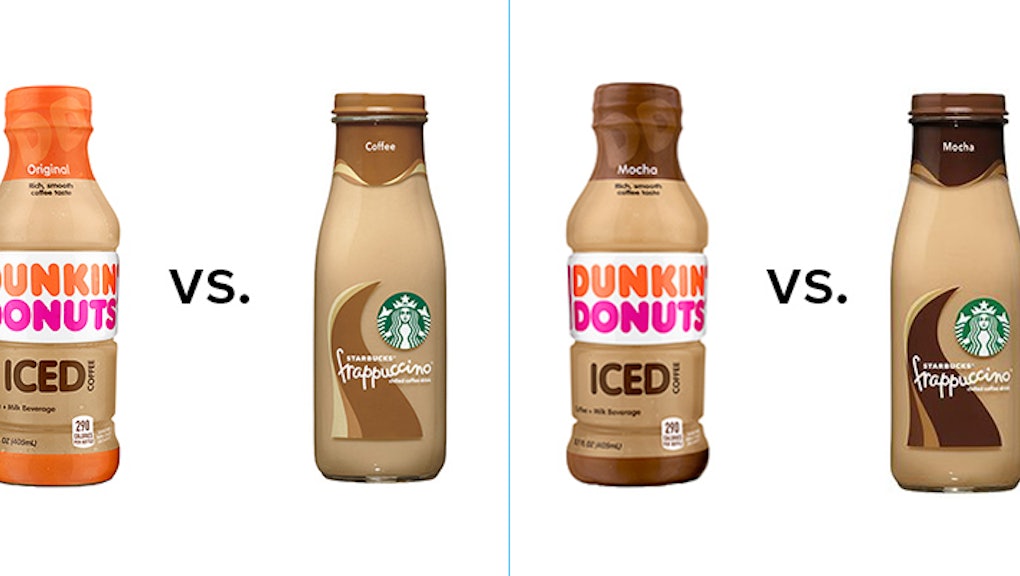 Starbucks vs. Dunkin' Donuts bottled iced coffees: Which is better?

Good news for anyone who insists on drinking iced coffee in winter: The iced coffee fridge at your local grocery store just got a little more caffeinated.

On Wednesday, Dunkin' Donuts rolled out bottled iced coffee drinks for sale at Dunkin' stores and select convenience stores. Sweetened with milk and sugar, the bottles look ideal for stashing in your bag to ward off caffeine emergencies.

Judging from the ingredients list, it'd be more realistic to call these new coffee drinks "sugar milk." Skim milk and sugar are listed as the first two ingredients .... and coffee comes is listed third. A huge spoonful of sugar helps the iced coffee go down, it appears.

The iced coffees are essentially the Dunkin' Donuts take on Starbucks' beloved bottled Frappuccino drinks, which are basically milkshakes masquerading as coffee.

One thing the Dunkin' drinks do have going for them? Caffeine. The caffeine for the Dunkin' drinks ranges from 153 to 186 mg per bottle, which is almost double the amount in an average cup of joe. (An 8 ounce mug of coffee typically has 95 mg of caffeine.)

The Dunkin' drinks also have more caffeine than the Starbucks Frappuccino drinks, which range from 30 to 130 mg of caffeine per bottle.

Dunkin' vs. Starbucks: Which is better for you?

When it comes to nutrition, the new Dunkin' drinks are awfully similar to the Starbucks frappuccino bottles. The Dunkin' drink has more caffeine and a little more protein, and both drinks clock in at around 300 calories.

Dunkin' vs. Starbucks: Which tastes better?

How we set up the blind taste test

Mic staffers took one mini shot glass full for each of the four coffees. Each cup had roughly one ounce. Testers immediately gave me their thoughts.

But the Dunkin' drink was still quite sweet — one tester said it tasted exactly like ordering an iced coffee with cream and sugar at Dunkin'. Others said the drink would be a good option if no fresh iced coffee were available.

Another tester said the Starbucks "Coffee" Frappuccino reminded her of affogato, a dessert made of ice cream topped with espresso. Most found it to be too sweet.

When it came to the battle of the mocha drinks, Dunkin' won out again. Some people found both of the mocha flavors to taste more "coffee-like" and less milky. "This is more my speed," one person said about the Dunkin' "Mocha."

Which drink was the best? The clear favorite of all four drinks was the Dunkin' "Original." A select few people liked the Dunkin' "Mocha" best of all.