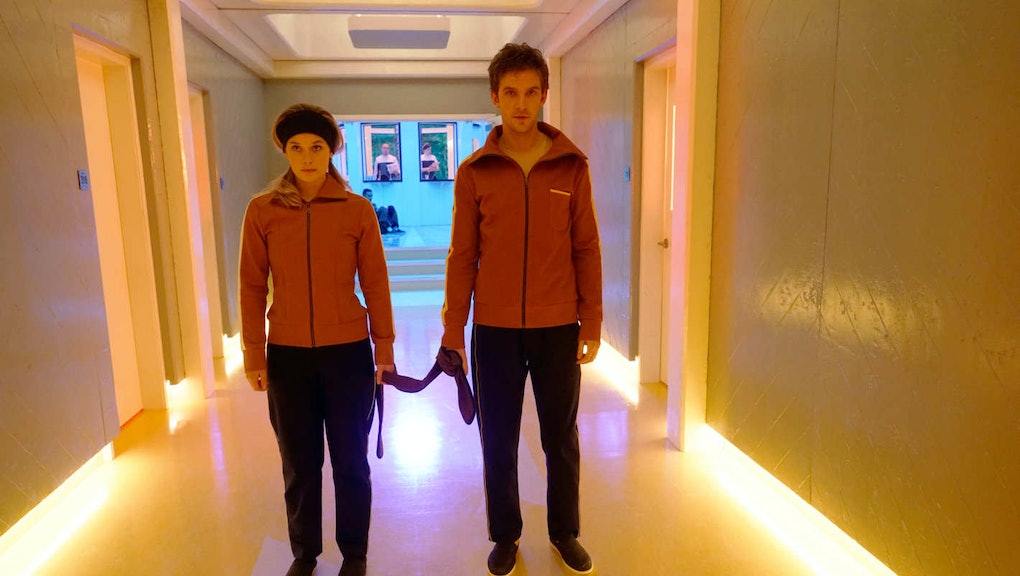 It won't take long for viewers to realize that FX's superhero series Legion is unlike any other attempt in the subgenre. Really, it should only take a few seconds into the premiere, when creator Noah Harley brings us through a fever dream of the protagonist's life from an adorable baby to a defeated young man trying to hang himself with an electrical cord. This is also set to the tune of the Who's "Happy Jack."

As odd as it sounds, it's the perfect way to get acclimated to Legion's unorthodox and subjective style, which would be best described as Mr. Robot meets the X-Men universe, or a Pink Floyd celebration reel on acid. This isn't a show that's going to telegraph its story linearly; in fact, in the sprawling 90-minute premiere, there's barely a cohesive storyline.

Legion follows David Haller (Legion is also his X-Men alias, hence the name), a gifted mutant who is diagnosed with paranoid schizophrenia. The thing is, he doesn't know he has powers — though he has his suspicions — and the caveat of everything that happens when he's living in a psychiatric institute is that this could all exist in his head. Actually, anything we've seen on Legion so far may or may not be real, and that's the fun of it.

But let's assume for now that he is, really, at the institute. His sole friend is Lenny — played by Aubrey Plaza, who is basically a slightly more unhinged version of her Parks & Recreation character — until a beautiful loner Sydney, played by Rachel Keller, shows up. She doesn't like to be touched, but that seems suits David just fine, as he immediately asks her to be his girlfriend. She will, so long as he doesn't touch her, of course.

But the endearingly strange relationship between David and Sydney is quickly halted by two important points: First, she's leaving the psychiatric institute, and second, we flash forward to the present to see David being interrogated by suspicious (presumably) government agents. They're asking about the incident at the institution and about Sydney, who has no hospital record. So yeah, that's not going to end well.

Turns out, David kisses Sydney the day she's set to leave, and the gesture causes a literal spark between them. David claims that the kiss somehow made them switch bodies, and with Sydney's consciousness in David's body she loses control of his inherent powers. All the patients are sealed into their rooms with no doors to let them out — which is admittedly terrifying — and poor Lenny is killed, rather brutally, by being trapped between the walls when this all goes down.

If you're thinking that would mean Plaza's turn on Legion was a one-off, well, this is a show where it's main character is seeing people all the time. So Lenny is now a permanent fixture in David's head, which thus far makes her the only character whose existence, or lack thereof, can be confirmed.

It appears, however, that Sydney is real, as she talks to David telepathically to explain how he can escape the clutches of the shadowy government figures with her help. The twist here is that Sydney has mutant powers of her own, explaining her distaste for physical contact. The final moments of Legion's premiere are David's spectacular escape with the help of Sydney and some new allies, who also have mutant powers. Wherever David's heading, it seems akin to Professor Charles Xavier's mutant school for gifted youth (except, for adults, maybe).

While we wouldn't blame anyone for experiencing superhero fatigue with the endless films and TV series popping up, the premiere of Legion is a testament to the ways in which the superhero (or in David's case, potentially supervillain) origin story can be dissected and repackaged. Of course, there's no getting around the fact that David is a mutant and still to some extent exists in the X-Men universe. But creator Noah Hawley has made it clear the series is intended as a standalone, and it holds up to the billing as an intimate story inside the mind of a man struggling with his mental health.

That has always been the proxy for the best X-Men stories. The metaphor of people who are X-Men "mutants" can smartly be used to represent marginalized individuals — X2 was praised for its not-too-subtle gay subtext — and Legion is an ambitious mediation on mental health.

Whether Legion can carry the momentum of its premiere remains to be seen. However, Hawley has created a show that, at the very least, can be considered the most creative superhero series to date.