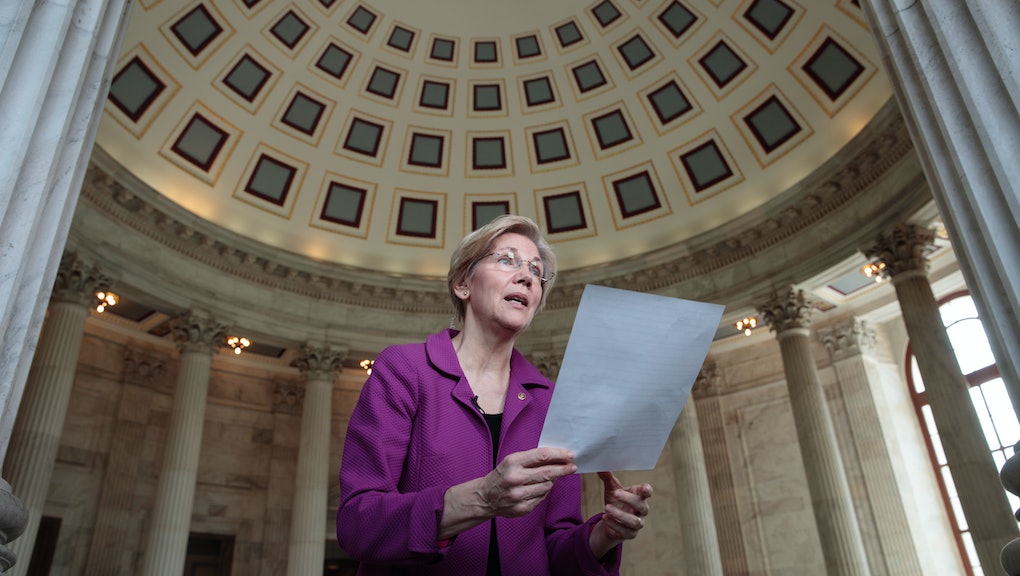 It’s no coincidence women are leading the resistance to Trump. Here's why.

Clearly women, who account for a meager percentage of institutional and congressional leadership, are heading up the Department of Cojones in President Donald Trump's U.S.A.

Exhibit A: Sen. Elizabeth Warren, now the lodestar of the left for getting the better of her Republican colleagues. The Senate shut down her reading of Coretta Scott King’s 1986 letter detailing Jeff Sessions' role in suppressing the black vote as a United States attorney in Alabama. Warren demonstrated her now-famous persistence by resuming her reading outside the Senate chamber, and livestreaming it to boot. Warren's reading went viral on social media, The View and the front pages of online venues, ensuring a vast readership for King’s unsparing assessment of the man who just became America’s new attorney general.

Newly woke Trump staffers, now keenly aware of how crowded the metro gets with the addition of one million ticked-off women wearing pink pussy hats, tried to soften things a bit after Warren’s video went viral. It was almost sweet, in an Arsenic and Old Lace, delusional-brother-thinks-he’s-Teddy-Roosevelt kind of way to hear White House press secretary Sean Spicer plaintively hope that King would support Sessions were she alive today. It’s awfully nice that no Republicans interrupted male Democratic Sens. Sherrod Brown, Jeff Merkley, Bernie Sanders, and Tom Udall when they picked up where the exiled women left off and continued reading King’s letter into the congressional record. Still, it’s Warren, and through her, King, who led Democratic opposition against Trump’s cynical attorney general pick.

Women were the ones who first struck back against the Trump administration. The national co-chairs of the Women’s March on Washington — Bob Bland, Tamika Mallory, Carmen Perez and Linda Sarsour — organized the largest single-day demonstration in U.S. history, driving over 3 million people into the streets of all seven continents to oppose an “America first” battle cry grounded in a primarily Aryan-guy-only definition of whose life matters. March organizers also famously drove Trump into a mine-is-bigger-than-yours tizzy with Washington crowds three times as large as had attended his tiny inauguration the day before.

Women are rare in the corridors of power — we account for over half the U.S. population, but only about 20% of the 114th Congress — yet it was Sen. Kirsten Gillibrand who led the charge in the Senate against nearly all of Trump’s Cabinet picks — with the exception of Nikki Haley — back when Sen. Chuck Schumer was still reminiscing about his gym buddy Sessions. Sens. Susan Collins and Lisa Murkowski, alone among Republicans, peeled off from their party to vote against the disgracefully unqualified Betsy DeVos for education secretary.

So what's all this about? Are women simply, as some have long argued, more genuinely anti-establishment and pro-justice, due to their long tenure in the hallway of the complicity-breeding Old Boy's Club? Do women simply smell the political coffee and know that strong leadership now positions them strategically for bigger systemic roles to come? Are women cohering around Trump's particularly toxic form of misogyny, sexism, racism, Islamophobia, xenophobia and anti-Semitism? Were Collins and Murkowski driven to rebel by the sheer spectacle of a clueless rich white major GOP donor lady being promoted to this nation’s leading educational position by an administration clearly convinced that "diversity" can only mean hiring unqualified women and people of color for key positions? And if so, how does that explain their vote for Sessions?

Biology is not destiny, politically speaking.

Because 2017, let’s skip past all of the 20th Century essentialist stuff about primary and secondary female sexual characteristics being the primary arbiters of femaleness. Let’s dispense with the notion that women are inherently more compassionate or fair than men. For evidence to the contrary, look no further than the history of women of color in any majority white women movement, hang out at recess in any middle school, or spend 10 minutes on any female majority political listserv.

Similarly, let’s bypass the blather about how Ann Coulter and Kellyanne Conway and Sarah Palin and all of Trump’s other surrogates aren’t really female. They sure are. So was Nazi propagandist Leni Riefenstahl. And Jared Kushner is Jewish and J. Edgar Hoover was queer and Sen. Tim Scott is black and so on and so forth. Biology is not destiny, politically speaking.

But here's what we can say for sure about the relationship of women to power. Women have gained access to a large, lower barrier to entry megaphone thanks to social media. We are triggered as fuck watching a highly qualified female politician lose the presidency to a politically inept sexual predator. We are inspired by the Civil Rights movement, particularly its most recent incarnation, in the form of the queer-black-women-led Black Lives Matter movement. We are sick of law enforcement that kills and incarcerates the people it's supposed to protect. We are terrified by the imminence of a Supreme Court that will strip us of self-determination (You’re “demoralized,” Neil, per your carefully planted pseudo-show of independence from the executive branch? You don’t even know what demoralized means.) Not least, we are repulsed by the Senate’s censure of Warren and King.

For all the struggles women still have amongst ourselves — and they are legion — the Trump administration has finally given us something to agree on.

We’re under attack. And we won’t go quietly.