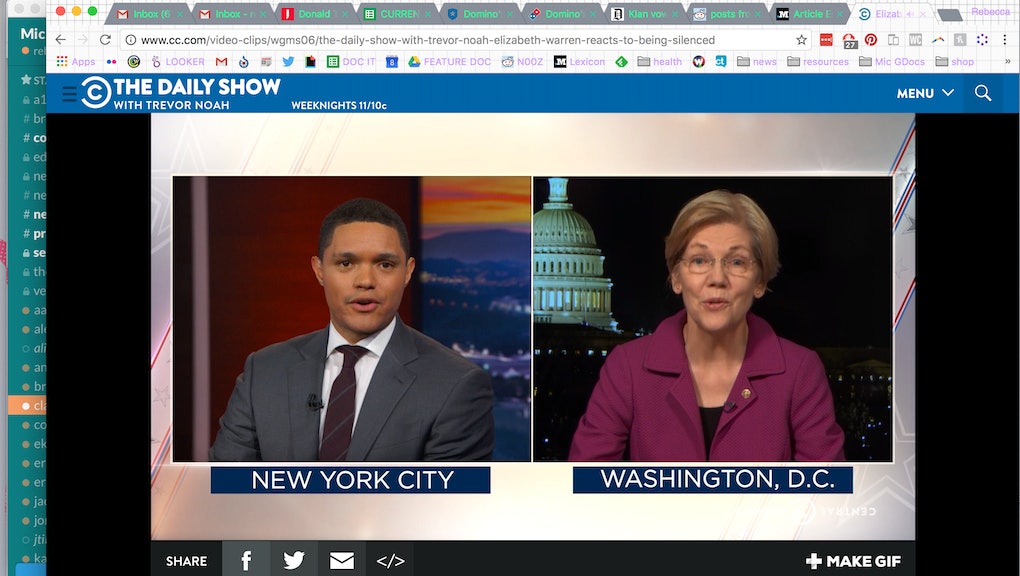 When he invoked a seldom-used rule to stop the Massachusetts senator from reading aloud the words of civil rights leader Coretta Scott King at a confirmation hearing for Attorney General Jeff Sessions on Tuesday, McConnell inadvertently gave Warren a much larger platform from which to spread her message and King's letter, and a perfect opportunity to blast his party on The Daily Show with Trevor Noah.

As a guest on Wednesday night's episode, Warren shared some thoughts on the Cabinet nominees' lack of relevant experience and, in Sessions' case, a track record of perpetuating racial injustice, in favor of pushing a political agenda:

"I just wanna start here with the Republicans' response on this. Coretta Scott King in her letter talks about how Jeff Sessions managed by prosecuting civil rights workers who were trying to help elderly African Americans vote — that by prosecuting them, he had done what local sheriffs had accomplished 20 years ago with clubs and cattle prods. She talks about what Jeff Sessions directly did as the U.S. attorney for Alabama, and you notice that Republicans aren't saying, 'Those aren't facts,' or, 'Something's changed and he did all these other things afterwards.' No, what they're saying is, 'You don't get to talk about that.'"

When Noah asked her if she thought McConnell realized how he's helped spread her message, Warren explained that the most important thing to her was that "millions of people" were now reading King's letter.

"It is a letter full of advice to us," she said. "It talks about a moment in history when African-Americans were beaten away from the polls and it talks about Jeff Sessions' role in that. And I think it has an important lesson today for all of America."

In silencing Warren, McConnell gave feminists a new rallying cry. He spurred her to read the letter on Facebook Live for millions to hear. He prompted Warren's male colleagues to stand up and read King's words on the Senate floor. He led her to defend the move on both The View and The Daily Show. And, as Warren told Noah, he handed her a tool with which to energize the Democratic party.

"What it's done is it's helped us have a better Democratic conversation," she said. "You know, understand, we don't have the votes in the United States Senate to block somebody like Jeff Sessions, or yesterday, to block a secretary of education who doesn't believe in public education. We don't have those votes, so what we've gotta do is count on people all around this country to make their voices heard."

Which is almost to say, thanks, Mitch!