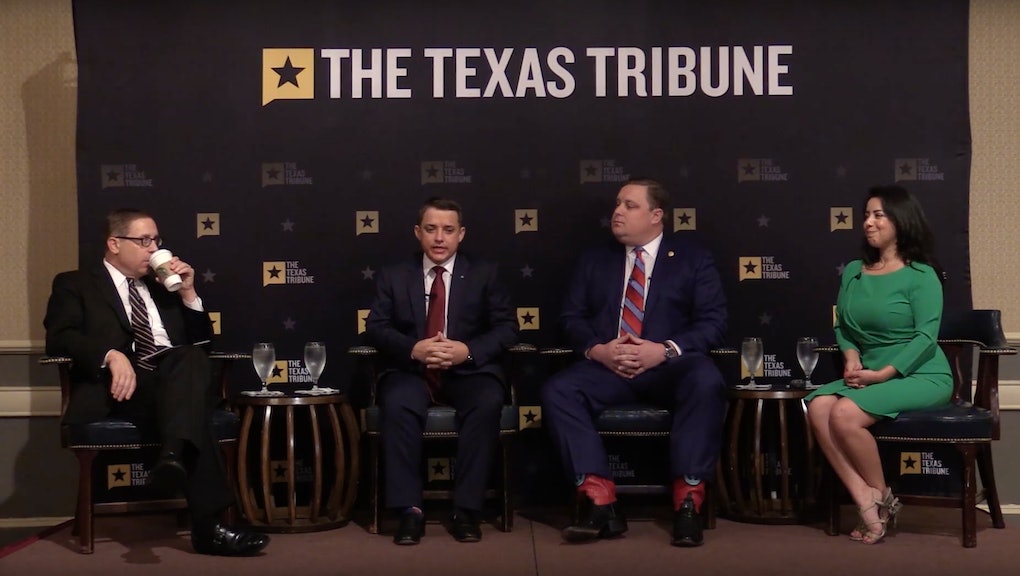 Briscoe Cain, a Republican state representative in Texas, dismissed the nationwide problem of anti-transgender violence at a panel discussion hosted by the Texas Tribune on Tuesday.

The Tribune's Evan Smith asked Cain to address the transgender community and critics of Senate Bill 6, one of two anti-trans bathroom bills currently proposed in the Texas legislature. Like North Carolina's infamous HB2, SB6 would require people to use the restroom that matches their gender assigned at birth, not their gender identity, in public buildings.

Smith pushed Cain to point out what societal problem he's trying to solve with a bathroom bill. Cain said there's a "real problem" in Texas cities that force private businesses to accommodate people going into a bathroom "that has nothing to do with them."

"[SB6] is just to say, 'Look, we're not going to allow government funds or government buildings to be used for social engineering,'" Cain said. "Men need to use men's restrooms."

During the panel, Cain said conservatives were "emboldened" to pursue SB6 after seeing the Houston Equal Rights Ordinance defeated in 2015. HERO would have prohibited discrimination based on sexual orientation or gender identity in housing and employment.

"That's really when we began to be emboldened," he said. "We realized it wasn't just a political thing. That parents, grandparents, everybody's concerned about men and women's bathrooms, shower rooms and locker rooms."

"Misgendering may not cause someone to go out and murder a trans person, but it does contribute to a culture in which hating and misgendering trans people is the norm, which does allow some people to justify violence against trans people," transgender advocate Riley J. Dennis said in a video on the subject.

In August, transgender actress Jen Richards spoke about this issue on Twitter in reference to Matt Bomer's casting as a trans woman in the upcoming film Anything.

"Culture as a whole still thinks trans women are 'really' men," Richards wrote. "When Matt Bomer plays a trans sex worker, he is telling the world that underneath it all, trans women like me are still really just men. And that is going to lead to violence. Not to me, likely, but to girls already most at risk. Any cis men who do this have bloody hands."

You can watch Cain's comments below, around the 27-minute mark.