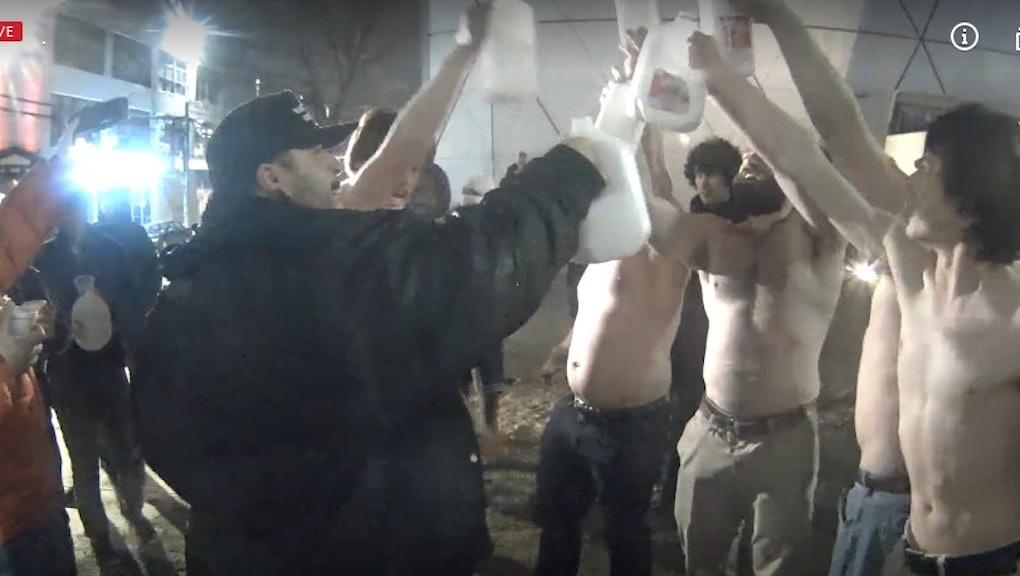 At the Museum of the Moving Image in New York City on a Friday night, neo-Nazis and other trolls danced shirtless in front of a camera. The livestream setup had originally been established by actor Shia LaBeouf as an anti-Trump art installation. But the project has since become a broadcast outlet for white nationalism.

Amid all the tattoos of Third Reich iconography bouncing around, one thing stood out: The neo-Nazis were all drinking milk. They spat it out as they danced, letting it dribble down their chins.

The last time you saw a Nazi chugging down a glass of cool, white milk, it was likely Christoph Waltz's character in Inglourious Basterds. So how did milk become a symbol of white pride?

Some white supremacists think white ethnic identity has a geographic, historical correlation with the body's tolerance for milk — specifically, the production of the lactase enzyme that allows humans to break down lactose.

On 4chan, the internet's hate speech hit factory, one anonymous poster laid this thesis out using the following graphic from a study in Nature, showing hotspots of where certain populations have higher milk tolerances.

The discussion thread also contained references to seemingly benign academic studies of "Lactose tolerance in a Slavic population," conversations about whether modern industry has tainted the purity of milk, and several milk-based poems about white pride.

When the brigade of trolls at the LaBeouf installation were accused on camera of racism by Paperboy Prince, a famous Washington Wizards fan and entertainer who has since become a top target of 4chan derision, they claimed it was actually a stance against the "vegan agenda."

Judging from the eugenicist rhetoric across online hate speech communities like 4chan and 8chan, it appears that the "vegan agenda" is a potential proxy term for conspiracy theories about a globalist Jewish agenda. But given the sheer mass of alt-right accounts spewing out calls of "Down with the vegan agenda," it could refer to any number of right-wing targets.

The whole milk-chugging, anti-vegan narrative is complicated by a number of factors, not least of which being that Adolf Hitler was possibly vegetarian for a short time, or that there are many places in Africa where milk is a dietary staple.

Then again, white racial purity is a fragile pseudo-science, so trying to find a sound explanation is a tall order anyway.