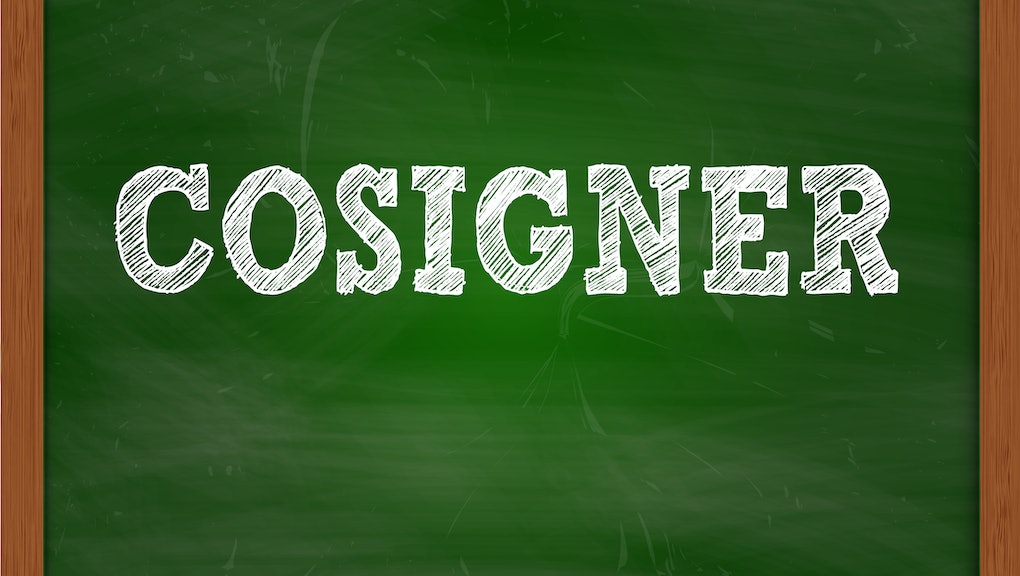 Co-signing loans is hardly ever a good idea: Here are the downsides too many people ignore

Even if you've got stellar credit, there's a good chance you have a broke friend, an unemployed sibling or a cousin with really bad credit. You may even have friends with no credit score at all because they've never opened a credit card account, taken out a student loan or even paid their own phone bill.

Of course you want to help: 1 in 6 adults say they have co-signed a loan or credit card for someone else, according to a CreditCards.com poll. Among millennials, college, car and home loans are the most common.

But be warned. Your pal's money problems could become yours if you co-sign an application with them.

If you get asked, should you say yes?

There are a few pros and quite a lot of cons to co-signing, so you need to think your decision through carefully.

Here's what you need to consider:

What does it mean to co-sign a loan?

If you co-sign a loan, your name goes on the credit application with the primary borrower (aka your deadbeat friend). You have to give your social security number and sign on the (real or virtual) dotted line. Your friend is the one who gets the cash, but you're equally responsible fr paying back the money.

It doesn't matter if they swore up and down that they would pay. The creditor cares only about the (legally-binding) promise you made.

The creditor knows they can come after you if your friend doesn't pay.

Why do borrowers need co-signers?

Creditors demand co-signers because the creditor isn't confident that the primary borrower will repay the loan. The creditor has decided the risk of lending to your broke friend is too great.

Maybe the creditor made that choice because your friend has never borrowed before, so they have no track record of paying back debts. Maybe the creditor decided not to lend to your friend because she blew her credit score by charging, and failing to pay for, a $100,000 Cheeto shaped like Harambe.

Whatever the reason, the creditor demanded that some other person with a better credit history (aka you) agree to guarantee the debt would be repaid. When you co-signed, you gave the creditor that guarantee and you put your credibility and credit score on the line.

Perhaps the biggest benefit to co-signing is the satisfaction you'll get from helping out a friend. And there can be real financial benefits for both of you.

First of all, they are more likely to get a lower interest rate for their loan if you co-sign, since lenders will see them as more likely to pay off the debt. And if your "friend" is a live-in boyfriend with whom you share expenses, that lower rate translates into lower monthly payments that will ease your joint budget.

In a best case scenario, your friend will also boost their credit score as they pay off the loan. That way, they won't need you next time. Bonus!

Your friend's on-time payments can also help raise your own credit score, since the loan shows up on your credit report as well as on theirs.

While this usually provides only a small bump to your credit, the effect will be bigger if they take on a different type of loan than you have ever had, since creditors like to see a mix of different kinds of debt.

For example, your score may increase when you have a mix of revolving debt (credit cards), a car loan, a mortgage and student loans, as opposed to just having a bunch of credit cards.

All the reasons why you shouldn't co-sign

If the lender gives up on collecting the full balance owed, the amount of the debt that went unpaid (or "forgiven") can be treated as income by the IRS, so you could get hit with a surprise tax bill.

Worst of all, the creditor could try to collect from you. This could mean collection calls and even a judgment against you in court.  Creditors often sue the co-signer first, before the primary borrower, Bankrate notes. Creditors do this because the co-signer was the one with a history of being financially responsible — that's why they were asked to co-sign in the first place.

You may think your friend is totally, definitely, 100% going to pay back the loan, but stuff can go wrong. Your friend could lose a job and be forced to declare bankruptcy, leaving you owing the debt. If a tragedy happens and your friend passes away, you still have to pay the debt.

"Co-signing for friends, boyfriends, girlfriends and extended family is jut not worth the risk," writes Bankrate's bankruptcy adviser Justin Harelik.

Decision time: should you co-sign?

In the end, it's a personal choice. There are lots of downsides and few financial upsides to co-signing. You may decide to do it anyway, maybe because your pal helped you out once when you were in a bind.

But before you decide, think hard about whether you're willing to take on the risk.