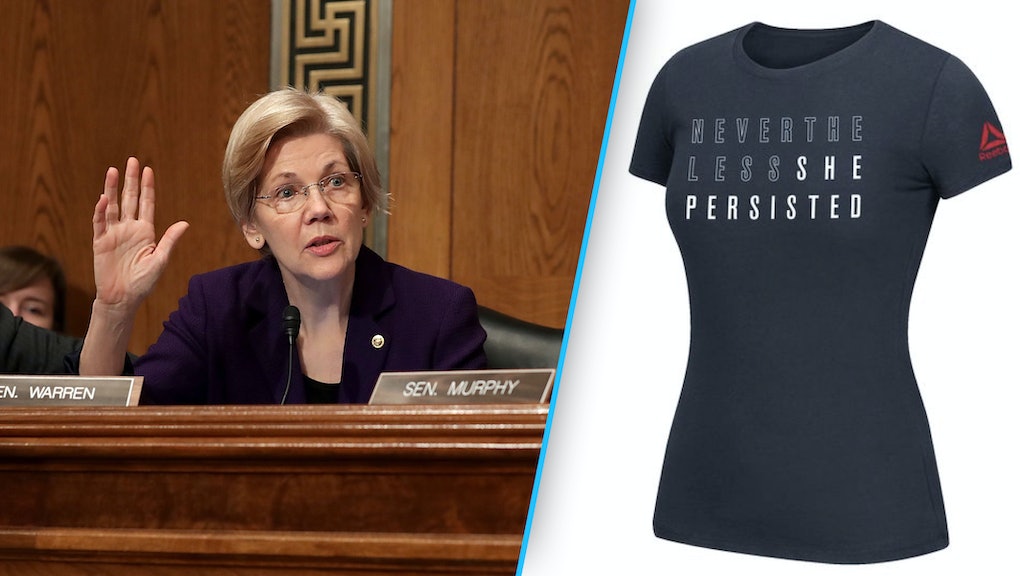 Reebok celebrates Elizabeth Warren by releasing its own "Nevertheless, she persisted" T-shirt

While athletic brand Under Armour is frantically trying to insist that the brand isn't aligning itself with the Donald Trump administration, Reebok just came out with a T-shirt that effectively says, "Donald Trump, who?"

The Boston-based company has just released a T-shirt that reads, "Nevertheless, she persisted," the same words that Sen. Mitch McConnell (R-Ky.) used to reason his silencing of Sen. Elizabeth Warren (D-Mass.) when she was giving a speech against Jeff Sessions' confirmation as attorney general.

The words are now a battle cry for many women, and Reebok, which is based in Boston, apparently wants to capitalize on these feelings.

"We watched this week as our own state['s] senator was 'silenced' by her critics for doing her job," Dan Mazei, a senior director at Reebok, said in an email. "As dismayed as we were, we were also reignited by the rallying cry of, 'Nevertheless, She Persisted.'"

"This is a unifying message that can inspire women everywhere from the Senate floor to the starting line of a marathon and everywhere in-between — all the places women have been obstructed from seeing through their ambitions," Mazei continued. "But, they persist."

The shirt, which Mazei said was designed by a woman too, retails for $20, with $20 going towards the Women's March, which is still helping organize women across the world and fighting for equality.

Reebok has long been situating itself as a woman-friendly brand, with the recent #PerfectNever campaign, which aimed to fight against unrealistic standards of perfection women often know all too well.

So in this socially conscious age we now live in, they're giving women — and men — just one more reason to support them and not a brand that may align itself with a person or administration they don't care for.

"We believe it's our responsibility to be more human; to strive to be the best versions of ourselves," Mazei said. "We should take every opportunity to improve — mentally, physically and socially. The message of 'Nevertheless, She Persisted,' as it's evolved this week, is one that's rooted in action and that unifies us all. It may have started in D.C., but it's one that could translate to everywhere from the workplace, to the starting line of a marathon."