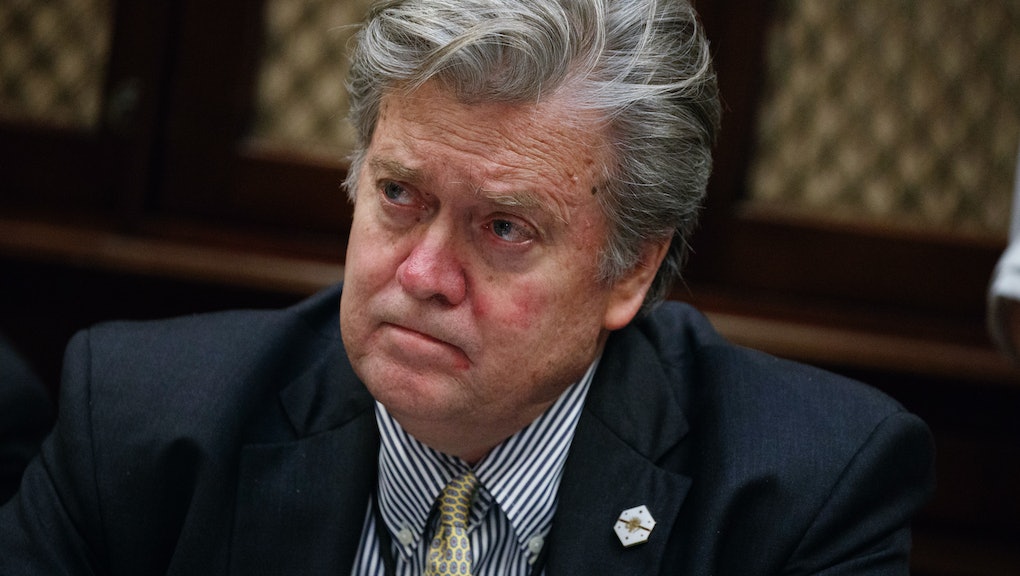 Those who follow politics may know that Donald Trump's chief strategist Steve Bannon used to run Breitbart, a news organization that sits on the far end of the right wing. You may also know Breitbart as the site that employs Milo Yiannopoulos.

Bannon has been linked to things as innocuous as liking Darth Vader and to things as insidious as intense antisemitism. His position's apparent level of influence over Trump has many concerned, both in and out of Washington. For that reason, it isn't easy to find anything he's done especially funny.

That said, a 2008 Wired article has resurfaced that reveals Bannon's unlikely former job as a World of Warcraft scammer.

When Bannon was at Goldman Sachs, he convinced his superiors to invest $60 million in Internet Gaming Entertainment, a marketplace that sold World of Warcraft gold to players in exchange for real money. That in-game gold comes from a process known as gold farming, where employees are paid extremely low wages to perform menial tasks in World of Warcraft to accrue gold.

IGE eventually went sharply downhill, and its founder, Brock Pierce — who, as a child, starred alongside Sinbad in the film First Kid — left the company. It was renamed to Affinity, and Bannon became CEO thereafter. Following the rebrand, Affinity moved on from gold farming into community management.

While it doesn't seem like Bannon was ever directly involved with the gold farming operation, he at least helped its gears turn for a while with the Goldman Sachs investment.

Warcraft players (such as myself) know that buying gold was and is a gigantic scam. Accumulating gold was time-consuming in the game's early years, but the rewards — such as incredibly fast mounts — made it feel worth it. Buying your way to an epic mount was essentially cheating yourself out of playing the game.

Nowadays, getting gold is trivial. Anyone who buys gold now is just hustling backwards.